This movie opens with three dirtbags and a young woman drinking beer in a car. The unpleasant scene cuts away when the dirtbag at the steering wheel tells the woman she isn’t going anywhere and rolls up the car’s windows.

In the next scene, it’s years later, and Emma, a woman near middle age whose face is tight and drawn, is being driven by an overly inquisitive ride service guy to a remote house. An overhead shot gives an idea of its remoteness; the plot on which the house sits is surrounded by impossibly neat trees stretching out past the borders of the frame.

As we’ve inferred that Emma is the same character who suffered the implied gang rape in the movie’s opening, we share, maybe, the unease she feels about being in this solitary place. This solitary place equipped with what appears to be a state-of-the-art security system. Which provides her with enough of a comfort level that she can take a swim before her husband, Henry, arrives. This getaway is meant to put some spark back into their troubled marriage. But sparks, or at least errant electricity, start holding more sway over them after the house is taken over by a seemingly all-seeing entity that instructs the duo (in a really feeble faux-creepy deep voice) to “Obey. Obey. Obey. Obey.” When the couple doesn’t, husband or wife get very nasty high-voltage shocks.

What the house wants them to do is … a lot. As the couple goes into their bedroom, Emma reaches to open the door and the faux-creepy deep voice says, “Stop. A man should open the door for his wife.” So, Henry opens the door. The voice then says “Mrs. Barrett. Smile and thank your husband.” Apparently the force controlling the house is kind of a combination Emily Post and construction worker.

“Could it in fact be … the patriarchy?” I thought as the movie’s premise made its very fast journey from mildly intriguing to utterly tedious. Don’t laugh. And here I will cease with the plot points. For the most part. I’m spoiler-conscious even when I’m panning.

The actor playing Emma is Jill Awbrey, who also wrote the script; the directorial reins are handled by Travis Cluff and Chris Lofing. This is the third feature for the duo, whose last feature was 2017’s “The Gallows Act II,” which I did not much care for. How little did I care for it? I said that the movie’s finale was “a rancid misogynist cherry atop a sloppy concoction of tired jump scares.”

While I am hardly so egocentric as to think that as a critic I have any effect on filmmakers whatsoever (and nor is it my ambition to), I am slightly struck that Cluff and Lofing here take on a project with what I’ll call a strong feminist component—from a script that they themselves have characterized in a press release, or something, as “empowering.”

But their direction doesn’t live up to their noble aspirations—the goofy voice is matched by an eyeroll-generating figure of the malevolent human who stalks the house, wearing what looks like a tighter, ebony variation on the Michael Myers mask. In addition, the movie’s big reveal is shamelessly derivative of a big-ticket, socially conscious 2017 horror movie, right down to the damn production design.

The acting is at a level you might expect if Hallmark Movies and Mysteries suddenly decided to “go dark.” (As it happens, the performer playing Henry, Bart Johnson, has at least one Hallmark picture to his credit, and honestly I was not aware with that when I formulated my observation. Honest!)

And while I understand the anger that animates Awbrey’s script, anger doesn’t excuse its overall weak argumentation, not to mention its rampant plot holes. Weird, too, given the movie’s ultimate theme, that the scenario seems to take place in a world in which the police have finally been fully defunded—there’s not even a hint of a possible authority institution here. 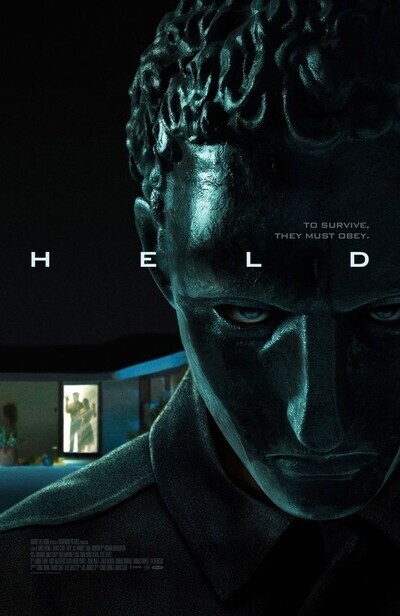