“The Gallows” is a perfect example of the Jason Blum money machine also known as Blumhouse. His model is simple. Low budgets = high profits. And when “The Gallows” made $43 million on a $100k budget, a sequel was inevitable. In 2017, rumors began to circulate that a follow-up to the 2015 original had been shot relatively in secrecy and was test screening for audiences. And then a few reports trickled out about how those test screenings went: not good. Buried for two years after those rumors and released with almost no promotion this weekend, it’s easy to see why even Blum wanted to forget “The Gallows: Act II.” It may be his company’s worst film.

There are your average everyday bad movies and then there are deeply incompetent movies. This is the latter. Basic elements of filmmaking like where to place a camera and when to cut a scene seem to have been outright ignored, and the script is a hodgepodge of tropes from other movies that’s designed merely to hold up the almost laughable number of jump scares (at one point, they literally try to pull off two back to back). We’ve all seen truly bad movies that still meet the basic criteria of moviemaking like camera angles that don't obscure faces, how to light a scene, etc. but “The Gallows: Act II” fails on this very fundamental level.

If it didn’t look like an inferior student film, the thin narrative might be more effective. The story is that of Auna Rue (Ema Horvath), a sweet girl who transfers to a prestigious new school and quickly rises up through its drama program. She does so via a monologue from a play called The Gallows, which is apparently cursed. As if the idea of a play that basically unleashes evil wasn’t enough for writer/directors Chris Lofing and Travis Cluff, they also incorporate some truly vile viral material a la Slenderman or other rumors of internet hauntings. Auna falls into a web wormhole about the “Charlie Challenge,” in which people apparently read passages from the play in an effort to bring its vicious hangman into the real world. Auna becomes an internet celebrity overnight when while reading a passage a table moves across her room.

As you might imagine from reading that recap, there are a number of places for a story like this to go off the rails and “The Gallows: Act II” takes every one of those opportunities and comes up with a few surprising ones too. Probably worst of all, it’s got a paper-thin understanding of internet culture, ostensibly playing with the idea that Auna wants to be a viral celebrity but then basically dropping that. It kinda plays with the idea of how stories like Slenderman can grow through sharing online, but it’s a half-baked exploration of internet urban legends. Auna is kind of an outcast at school, but her acting skills and her relationship with a popular kid named Cade (Chris Milligan) end that narrative thread. You almost have to admire the audacity of a scene in which Auna defends a kid from being bullied, leading one to believe she’s formed a new friendship, but it’s a really a scene designed for her to impress the jock with her decency.

Worst of all in a film of only worsts is the way the writers and directors treat theater culture. There’s an unbelievably lengthy monologue scene that ends with a standing ovation from her teacher and classmates when the truth is it’s really not that good a monologue and any drama teacher on Earth would tall Auna that. To be fair, Horvath fights her way through the awful dialogue and thin characters, almost delivering a one-woman show given how forgettable the rest of the cast is, but you can almost see her succumb to the dumb story and weak dialogue as Auna succumbs to the haunting facing her. If there’s anything one can say positively it’s that Horvath should find better material. She’s relatively charming and the failures of the film have nothing to do with her.

But there are oh so many failures. I’m not convinced anyone involved with this film really wanted to make it. You can sense artistic vision in great movies and you can sense that everyone was just trying to pay rent in the truly awful ones. This thing is so lifeless in terms of visuals and storytelling that you can almost picture the cast and crew trudging to the set every day and clocking in like they’re working in a factory. A factory that makes dumb movies. 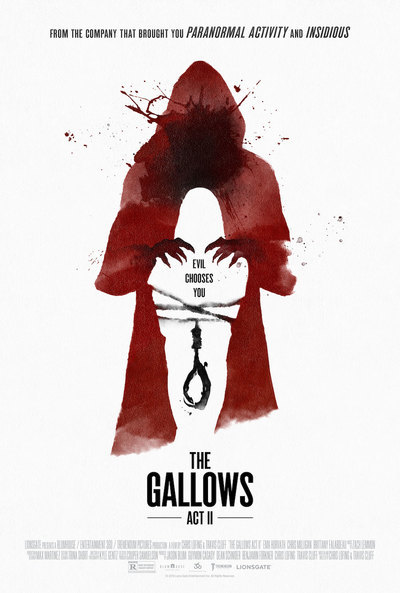