Hector and the Search For Happiness

Peter Chelsom's "Hector and the Search for Happiness" (based on the book by François Lelord, a psychiatrist in real-life, just like the eponymous Hector) treats happiness as an easily-digestible cross-stitched homily, the kind hung as harmless decorations in people's living rooms. It's chain-mail wisdom, sprinkled with balloons and kitty-cat faces, forwarded by people with too much time on their hands. It's "Eat, Pray, Love"-lite, and "Eat, Pray, Love" was already "lite." One of the things "Eat, Pray, Love" and "Hector" have in common is that they feature economically privileged people with enough disposable income that they can leave their jobs for an indeterminate period of time and take multiple international flights on their quest to understand themselves.

Hector (Simon Pegg) is a psychiatrist. His patients bore him, and he has a hard time empathizing with them anymore (if he ever did). He has a girlfriend named Clara (Rosamund Pike), who works for a pharmaceutical company, and is congratulated by her boss at a company meeting for "never having heard of the two following words-'maternity' and 'leave.'" Hector and Clara have a tidy high-end life, make each other laugh, seem to complement one another, and yet still, Hector is lost. He packs a backpack and flies to China. Why China, we don't know.

During Hector's worldwide search for happiness, he scribbles down realizations in his journal, numbering them neatly and accompanying each one with drawings. The drawings sometimes become animated, showing Hector's growing sense that the world is alive with beauty and mystery.

Hector's realizations, though, would be self-evident to any child who has seen a Disney movie, not to mention the fact that these realizations have already been expressed, and far better, by some of the greatest writers and thinkers in history. Hector may want to save the money spent on international airfare and just stay home and read Shakespeare's plays, or George Eliot's novels or Carl Dennis's poetry. Hector, as played by the very talented Simon Pegg, is a man so shallow he has never asked himself any personal questions involving any depth whatsoever. That's quite a feat for a man pushing 40. "Hector and the Search for Happiness" is extremely forgiving of its lead character, treating his quest romantically. There are a couple of moments when other characters point out Hector's faults (one fight scene with his ex-girlfriend, played by Toni Colette, puts it extremely plainly), but those moments end up calling into question the point of the entire film. While understanding that "Hector and the Search for Happiness" is meant to be a parable, and not realistic, it uses the most condescending fortune-cookie thinking possible, not to mention calling in entire foreign nations to act as props to highlight one man's quest for enlightenment.

On his flight to China, Hector meets Edward, a wealthy businessman (Stellan Skarsgård), who ends up showing Hector around Shanghai. There are montages of the two of them wandering the streets, eating "weird" food and pointing at the sights; Hector agog at the "exotic" setting. At a nightclub, he meets a sexy woman named Ying Li (Ming Zhao). We get voluptuous, lingering shots of her naked back in the shower, and then a view of her fully naked body curled up in bed, as a fully clothed Hector stares down at her with tenderness. Bedding sexy natives is one of the perks of international travel. She is the only person he meets in China, and she is an amalgamation of unimaginative stereotypes. She is sexy, and also sweet, and kind of a damsel in distress, too, and she's also really just a good girl inside! It doesn't help that some of her moments are accompanied by the sound of a Chinese gong.

Hector meets smiling Tibetan monks who have faced terrible persecution and torture, and yet still, they laugh, circling rapturously underneath fluttering colored prayer flags, all as Hector watches in amazement, inspired. That is why Tibet is there, apparently: to inspire the rest of us.

Africa is a continent, not a country, and yet "Hector and the Search for Happiness" treats the entire gigantic land-mass, made up of multiple and diverse countries, as one place: Africa(™). The airplanes in Africa are filled with breastfeeding women wearing colorful robes, men smoking cigars, and chickens wandering the aisles. The plane nearly crashes and everyone laughs uproariously. Hector is inspired by their careless joie de vivre! He meets a woman on the plane who tells him the secret to happiness is in her recipe for sweet potato stew and she invites him over for dinner. The entire village in the unnamed African country turns out to greet Hector joyously, whooping it up supportively as he drinks wine and dances with them. These people have nothing better to do with their lives than try to teach some dumb white guy that it's fun to have a dinner party and hang out with your friends. The African sequence is a particular low-point. Africa is shown as dangerous, gunfire in the streets, and the entire "country" is boiled down into a place containing elephants, antelopes, saintly white aid workers, women with baskets on their heads, happy villagers and scary rifle-carrying soldiers.

As beautifully filmed as the worldwide tour often is (the film was shot by Kolja Brandt), "Hector and the Search for Happiness" has an undeniable strain of poverty tourism, mixed with the insulting belief that those who have nothing somehow hold the secret to life. "Hector and the Search for Happiness" ends up, unintentionally, being a treatise on the cluelessness of affluent do-gooders, those who look at a smiling poverty-struck woman in a refugee camp and see her as evidence that the world is good because she is still able to smile! Sure, money isn't everything, but it certainly isn't nothing either. Hector couldn't trek around for months on end without it.

The supporting cast features such heavy-hitters as Jean Reno, as a Colombian drug dealer Hector meets in Africa, and Christopher Plummer as a brilliant and eccentric (he wears a pink sweatshirt during lectures) neuro-scientist devoted to studying happiness. Toni Collette's character Agnes seems openly irritated with Hector's quest, and by that point in the film, many audience members will feel the same way. Hector is a cipher, a nonentity, a man with no inner life, until … smiling Tibetan monks show him their prayer flags and something clicks for him. Pegg, a diverse and sensitive actor, is fine, but here he's in the service of extremely poor material.

Good intentions are all over "Hector and the Search for Happiness." Clear care has been put into the project. There is nothing wrong with trying to put on film a parable about what it means to be human; stories about unhappy trapped characters who discover a way to cherish the life that they have. Films like "Wizard of Oz," "It's a Wonderful Life" and "Stranger Than Fiction," to name just a few, treat this same topic with sensitivity, creativity, and emotional honesty. "Hector" is an animated Power Point presentation in comparison. 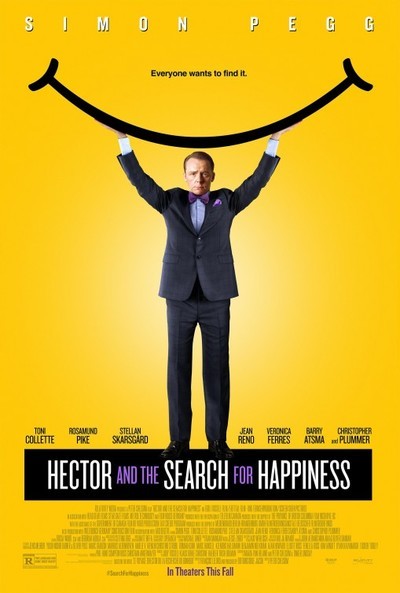 Hector and the Search for Happiness (2014)

Rated R for language and some brief nudity