Heart of a Dog

Laurie Anderson’s “Heart of a Dog” is a meditation on love and loss that refreshingly doesn’t come to hard-and-fast conclusions about each, so much as opine that perhaps we’re focusing on them in the wrong way. The poetic, visual essay opens up (at least to me) when Anderson, who has faced the deaths of her husband Lou Reed and her beloved rat terrier Lolabelle in recent years, notes that our discussion and obsession with death often focuses on the living more than the deceased and that it is our memories and the journey-after-death that are ignored.

Before this observation, Anderson has playfully crafted a piece consisting solely of her narration and interpretable visuals like rain on a windshield or a snowy road (and a few home movies). She also captures a sense of life's unpredictability, often noting how the world has changed after 9/11, mostly in the way we are now always under surveillance. We are heavily documenting life, but it is a life that can’t be scripted or known. Something as universally Earth-shattering as 9/11 or as personally devastating as the loss of a dog could be a part of any given day. And yet “Heart of a Dog” is not a dirge. It is not a film made by someone who has gone underground to avoid the recent tragedies of her life. On the contrary, it accepts life’s twists and turns and embraces the fact that these unexpected detours on life’s journey are unavoidable. There are times when Anderson’s Buddhist leanings can be a bit overwhelming, and the piece ends a bit too abruptly for my tastes, although that almost seems thematically appropriate.

For her first film in 30 years, famous NYC performance artist Laurie Anderson weaves very personal stories, commenting on life in her favorite metropolis in a post-9/11 world, and Buddhist philosophy about the journey that we take after we die. Much of it is focused on Lolabelle, a rat terrier whom Anderson clearly adored. Early in “Heart of a Dog,” Anderson conveys a story of getting out of the city after 9/11 and going on a nature walk with Lolabelle, only to be the target of a hawk who thought the dog potential prey. The idea that we can be someplace warm, comfortable and happy only to have danger literally fall from the sky is an obvious parallel to unexpected tragedy (especially one that also featured airborne enemies).

However, and this is to her credit, Anderson rarely lingers on such thematic purposes for long. She’s also fascinated by communication not just between people but between humans and animals, and even to the great beyond. She shows footage of Lolabelle “playing piano” and recounts a story of a friend dying and the theory that the ears are the last thing to go—so make sure to yell instructions on how to get to the other side. How do we relate to our pets? How do we relate to the dying and the dead? Anderson’s most poignant stories in “Heart of a Dog” center on her mother, about whom Anderson can’t relate a positive memory but she keeps returning to her passing, clearly a crucial moment in her life.

Perhaps what’s most remarkable about “Heart of a Dog” is that it’s able to be about many things to many people while also not lacking in an ounce of confidence or focus at the same time. In numerous ways, it’s structured like a dog’s journey through life, sniffing around at what interests it in the moment. And yet that’s not to suggest it’s unfocused (although I think some will be frustrated by Anderson’s more ruminative moments). “Heart of a Dog” is a deeply reflective film, a piece that suggests that death is about a “release of love” more than anything else. It is not something to obsess about or wallow in. Anderson argues that we (even the dead) keep going after tragedy, and so her film becomes not a wake but a celebration, a call to people for acceptance of moments big and small, predictable and unexpected. In that sense, it is one of the most invigorating and alive films of the year. 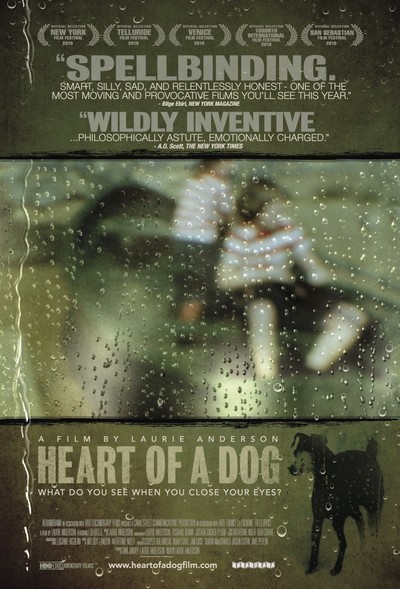