He Named Me Malala

Lizzie Velasquez and Malala Yousafzai grew up half a world away from each other, but the paths they took from ordinary girl to international symbol of hope follow some similar ground. Both suffered persecution: Velasquez for her appearance, Yousafzai for her activism. Both chose not to be victims of their attacks, but rather to use their energy and ingenuity to create platforms for peace and understanding.

And both have been the subjects of documentaries that mean well but end up being frustratingly superficial. Last week, we had “A Brave Heart: The Lizzie Velasquez Story,” about the young Texas woman with a rare genetic syndrome who was eviscerated online but has since become a motivational speaker and anti-bullying lobbyist. This week, we have “He Named Me Malala,” about the Pakistani teenager who was shot by the Taliban for advocating girls’ education but since has become the youngest-ever Nobel Peace Prize Laureate.

Yousafzai’s story is deeply inspiring and already has been the subject of the memoir “I Am Malala,” which provided the basis for director-producer Davis Guggenheim’s film. The fact that she was shot in the head at age 15 while riding home on the school bus and managed not only to survive but also thrive is stunning. That story alone would make her a natural focus for a film like this—but Yousafzai also happens to be incredibly charismatic. With her sweet smile and sly sense of humor, she radiates poise, wisdom and confidence. She is both a magnet and a beacon—and she’s still only 18 years old.

All of which makes “He Named Me Malala” such a disappointment. This is especially true coming from a veteran documentarian like Guggenheim, who won the Academy Award for 2006’s “An Inconvenient Truth” and also has given us “It Might Get Loud” and “Waiting for `Superman’.” The press notes tout “18 intensive months” of shooting and promise “an intimate portrait” of this extraordinary young woman. But while we do indeed see the normalcy of her home life with her parents and younger brothers and the regular, teenage-girl instincts that exist alongside her courage, we never get a glimpse into her deeper feelings.

At one point toward the film’s end, we hear Guggenheim ask off-camera about Yousafzai’s reluctance to talk about her suffering. She rejects this line of questioning, pleasantly but firmly. And that’s that. Similarly, he touches on the notion of Yousafzai’s fellow Pakistanis denouncing and questioning her for her progressive stances, but he quickly leaves that complicated topic.

In the place of such much-needed substance, we get filler in the form of wispy, pastel-colored animated segments. They fill in the blanks in Yousafzai’s family history and tell the tale of another brave young woman for whom her father named her: the Afghani folk heroine Malalai of Maiwand. The first time Guggenheim employs this technique, it’s quite lovely, and it gives “He Named Me Malala” a dreamlike, fairy-tale feeling that’s in stark contrast to the real-life horrors Yousafzai has endured. After repeated use, though, the animation feels like it’s padding the film’s 88-minute running time on the way to a rushed conclusion.

And yet … and yet. Her story is so important and so necessary to see that it’s hard not to recommend it—especially for young girls, to whom she’s devoted herself worldwide over the past few years. (Although, in an amusing running bit, the normally stellar Yousafzai’s own grades suffer at her high school in Birmingham, England, because she’s busy traveling the globe, meeting with President Obama and Bono and appearing on “The Daily Show.”)

But another source of humor comes from the glimpses into her daily life with her family. She and her two younger brothers consistently give each other grief, as siblings are wont to do. She gets giggly when she Googles pictures of Roger Federer and Australian cricketer Shane Watson. She wonders whether the other high school girls will like her. And although her educator father, Ziauddin, is clearly a forward-thinking gentleman and dedicated activist in his own right, he’s clueless when it comes to figuring out Twitter.

All of these elements help round out—somewhat—the portrait of a teenager who’s become so famous, she’s known by her first name alone. The contradictions are fascinating—so much so, they make you wish Guggenheim had dug even deeper to find out what really makes her tick. 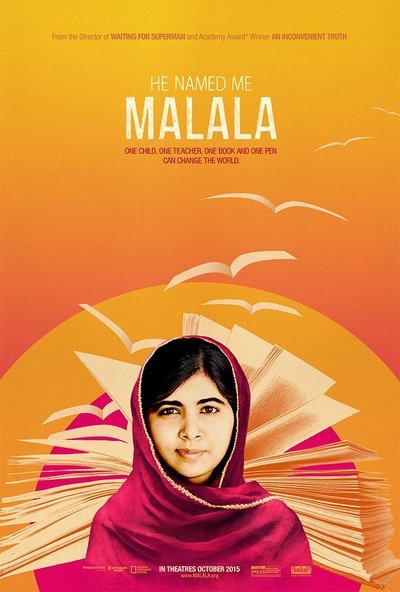 Malala Yousafzai as Herself