When Lizzie Velasquez was in high school, she found a video about herself on YouTube titled: "The World’s Ugliest Woman.” Featuring footage of Velasquez—who, at that point, had an undiagnosed syndrome that gave her striking facial features and difficulty gaining weight—it drew over 4 million views and prompted hundreds of cruel comments.

(In case you were unaware, the Internet can be an unkind place.)

Velasquez read every single harsh word and took them all to heart—then she tossed them right back. Rather than letting this devastating discovery define or destroy her, she seized this same method of communication and used it to spread positivity and empowerment.

The documentary “A Brave Heart: The Lizzie Velasquez Story” follows the Austin, Texas native’s journey from insecure, bullied kid to internationally acclaimed motivational speaker and lobbyist. Her story would be inspiring in and of itself, but Velasquez is such an effervescent, charismatic subject, she can’t help but win your affection as well as your respect.

Director-producer Sara Hirsh Bordo was clearly wowed, as well; her first feature is an unabashed love letter to this young woman that rarely dares to dig too far below the surface. She presents very little in the way of drama, suspense or forward momentum; Bordo’s documentary is extremely straightforward and doesn’t attempt anything ambitious artistically. Still, Velasquez is abidingly pleasant company for the film’s brief running time—and the purity of her message is undeniable.

“A Brave Heart” allows Velasquez, now 26, to reflect on the difficult childhood she endured because of her unusual appearance. At the film’s start, she wanders the campus of her old elementary school and gets teary-eyed at the memory of hiding from staring kids in kindergarten: “I would look at everyone and just wish I could be them,” she recalls. “And to just think that 20 years later, the world knows who I am, and it’s for something good.”

But Velasquez manages to laugh and smile while glancing through a stack of her baby pictures: “I had a giant forehead, and I still do.” She’s also sanguine in discussing the myriad tests, scans, surgeries and reconstructions she’s endured throughout her life. That’s what’s so disarming about Velasquez throughout the film—no matter what’s happening, she radiates sweetness, humor and decency to her core.

But her upbeat nature was severely tested at age 17 when she found the “ugliest woman” video on YouTube. (Let this be a lesson to all of us: Do NOT read the comment section. Ever. And if you do read the comments, don’t give them any weight, positively or negatively.) Still, clever woman that she is, Velasquez started her own YouTube channel in response. She figured out how to use the immediate, worldwide access of the Internet to promote kindness and self-esteem, and she now has over 450,000 subscribers. The 2013 TEDx talk she gave in Austin has nearly 9.6 million views. Toward the film’s conclusion, she steps out on stage to a standing ovation before a crowd of 10,000 in Mexico City (but first, she has a thoroughly awkward meet-and-greet backstage with Hillary Clinton, which leaves her giddy).

Which brings us to Velasquez’s journey to Washington to lobby on behalf of the Safe Schools Improvement Act, which aims to legislate bullying. (The bill still has not passed.) Her partner in this effort is Tina Meier, whose daughter, Megan, hung herself shortly before her 14th birthday in 2006 after suffering cyber cruelty. While this section feels like its own separate, tangential film, it does allow us a couple of glimpses of Velasquez when she’s feeling less than perky.

In one instance, she and Meier discuss the pressures of serving as an inspiring figure for others all the time and feeling reluctant to surrender to moments of weakness. In the other, Velasquez becomes ill on the day she’s scheduled to visit various members of Congress. She goes to the bathroom and throws up, but powers through with her usual poise.

“A Brave Heart” could have used more of such unguarded moments; as it stands now, it’s a worthwhile film that could have been a powerful film if it had gone beyond the skin-deep. 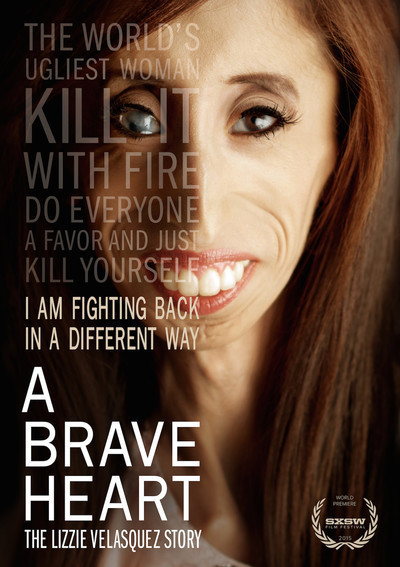