My mother's favorite episode of "The Dick Van Dyke Show" was not one of the certified classics, like the one with the walnuts, but rather the one in which middle-aged comedy writer Buddy Sorrell was belatedly bar mitzvahed. God, she would have loved "Hava Nagila: The Movie," a slight, but very satisfying, and at times, surprisingly moving, documentary about the inescapable Jewish anthem and wedding and bar mitzvah music staple.

But you don't, as the old saying goes, have to be Jewish to enjoy it. Because everyone knows "Hava Nagila." It is an instantly recognizable musical cliché on par with "Kumbaya," a pervasive earworm so irresistibly catchy, yet so cheesy that even "It's a Small World" might be moved to protest, "Please, make it stop."

"It's not just a song, it's an event," offers Josh Kun, one of the academics who speaks on the mystery, history and meaning of "Hava Nagila." "It's a song that screams, 'This is a Jewish song.'"

Not everyone is happy about that. Counters Henry Sapoznik, founder of KlezKamp, a Yiddish folk arts program, "It's relentless, resilient, but so are cockroaches. … It represents for multitudes of people Jewish music and that's all that they will ever know."

There is much more to "Hava Nagila," however, than meets the ear. As another expert observes, the song is "a portal into a century-and-a-half of Jewish history." To find out how this song went "from the Ukraine (where it began life as a wordless prayer) to YouTube," director Roberta Grossman embarks on a global "Hava quest."

Strap yourself in for a Hava-palooza. Grossman unearths a dizzying array of clips from films and TV shows in which "Hava Nagila" has been featured, including "Private Benjamin," "Thoroughly Modern Millie," "Wedding Crashers," "Daddy Day Care," "The Danny Kaye Show," "The Ed Sullivan Show" and "The Simpsons."

But wait; you ain't heard nothin' yet. "Hava Nagila" has also turned up in "Raisin in the Sun," a Bruce Springsteen concert, and the B-side of Glen Campbell's single, "True Grit." Chubby Checker twisted to it, and Lena Horne adapted it for her powerful civil rights anthem, "Now."

And Bob Dylan! To paraphrase a joke from Ernst Lubitsch's "To Be or Not to Be," what the Germans did to Poland, Dylan does to "Hava Nagila."

The movie includes interviews with two of the song's most prominent ambassadors, who were instrumental in introducing the song to a mass American audience, Connie Francis, an Italian Catholic, who included it on her bestselling album, "Connie Francis Sings Jewish Favorites" ("I'm 10 percent Jewish on my manager's side," she jokes), and Harry Belafonte, who movingly recalls singing the song in Germany.

Inevitably, "Hava Nagila" becomes a target for spoof and parodies (Allan Sherman's ode to upward mobility, "Harvey and Sheila") and ultimately outright scorn by a new generation attempting to take Jewish music into the 21st Century.

But "Hava Nagila," endures as "an immediate connection to tradition and community." Its lyrics speak of rejoicing ("We are a happy people," one rabbi proclaims) and throughout Jewish history, the song has been the best and most defiant answer to oppression and misery.

Writer Sophie Sartain tries to get cute with onscreen identifications (Someone Else, Really Smart Historian), which gets old fast, but Grossman keeps the film as briskly paced as a Hora, the dance that became "Hava Nagila's" soul mate.

Grossman tackles several intriguing questions, among them: Which is more Jewish, "Hava Nagila" or gefilte fish? And who was the actual author of the song? (Two competing families stake their claims.) But the one, eternal question that this documentary dances around may never be fully, truly answered: What's up with this song? 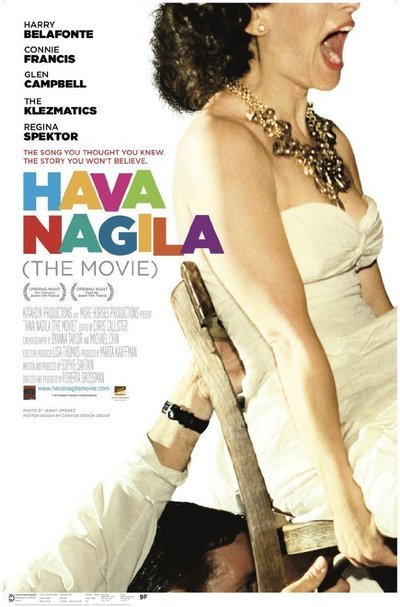