The word I kept thinking of while watching "Haute Cuisine" was "brisk," as in a brisk walk. This movie keeps up a vigorous pace and carries you along on the force of its self-confidence. A journalist and her cameraman arrive at French research station in the Antarctic to shoot what looks like a fairly mundane story, until she spots the only other woman on the island, who is at the dock to check out the foodstuffs that have arrived. When one of the men explains that this is their cook, and that she used to be the personal chef of the President of France, the journo snaps to attention. "Film her!" And we're off.

After a few quick scenes in the research station's kitchen, where Hortense Laborie (Catherine Frot) is making incredibly elaborate food, we're thrown into flashback. Hortense is being whisked from her truffle farm in a government car to catch a train to Paris. Someone in government wants a chef, but precisely whom that would be has been left vague. Bang, we're in Paris, where Hortense learns that she is being offered the job of personal chef to President François Mitterand. The music, the snappy script and the editing have carried us along so quickly it feels almost like a thriller.

The thrills will come, but in the form of glossy reductions, plump escargot, rich duck breasts layered with delicately cooked vegetables, a cream cheese treat that requires straining through a mesh made of a particular grass. Like "Big Night," this is a food lover's movie. But while that movie luxuriated in the food, this one embraces the kinetic energy of kitchen creation.

Honestly, not much happens. Laborie meets the president (Jean D'Ormesson), a gentle soul nostalgic for the food of his youth. She spars with the pompous chef who runs the "main kitchen" of the Palais, the one that serves up hundreds of meals for the staff (a kitchen notably staffed exclusively by men). She battles Mitterand's dieticians, who want to put the frail old man on a low-fat diet (Quelle horreur!). She leaves. It's all interspersed with scenes in the Antarctic, where she prepares the last meals for the crew before she departs at the end of her year as their cook.

The real fascination here is twofold. First, it's just darn fun to watch her cook. I have no idea whether Catherine Frot is doing things right or not in terms of kitchen technique, but I'd watch her layer a stuffed cabbage all day. And when she samples the work of her sous chef Nicholas (Arthur Dupont), trying to decide whether this bite is something she would serve to Mitterand, her face takes on a look as if she is listening to distant music.

Frot makes Laborie (who is "inspired by" the real Mitterand chef Danièle Mazet-Delpeuch) a fascinating enigma, supremely elegant in her sweater sets and pearls but with a backbone of steel. There's a wonderful scene early on (to pick one from many), when she is offered the position and at first declines because, she says, she's not worthy. Frot conveys something incredibly complex. It's not some coy false modesty. She knows she's a damn fine chef. It seems that she is assessing herself and thinks there are better people for the job. But even under that layer there's something else: She's shrewd about power dynamics, even if she ignores them when playing the game gets in the way of good cooking. All of that comes across in perhaps ten seconds.

The film gets a lot of gentle chuckles out of the way food is treated as deadly serious business in the French presidential palace. And a palace it is. The butlers still wear tails, none of the president's staff would ever be seen in anything less than a suit, and the menu for lunch can achieve the level of state crisis. When Hortense and Mitterand settle in for a chat about cookbooks and recipes, his staff scurries around in the hallway like terrified hens, rescheduling the presidential plane's takeoff to accommodate this unexpected delay.

Breezy, brisk, vigorous. These aren't words one would automatically associate with a foodie film, but they're meant as praise. Though a woman of Hortense's cool elegance would never say it, she has a heck of a ride as Mitterand's chef, and it's fun to be along for it. 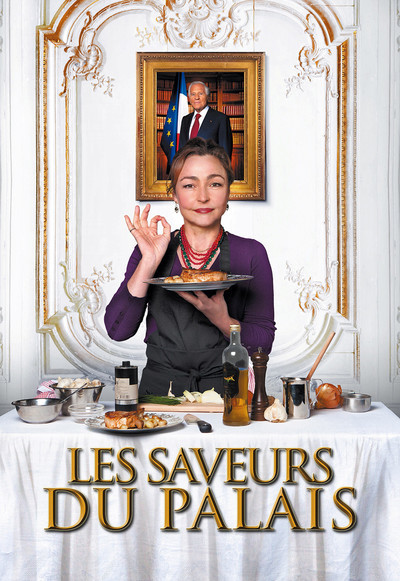