Canadian horror filmmaker Vincenzo Natali ("Cube," "Splice") is at his best when he's turning his stories into mazes. He is, in that sense, a descendant of another Canuck scare-meister: David Cronenberg. Like Cronenberg, Natali treats his characters like test subjects with unique maladies/characteristics. In fact, Natali likes the symptomatic circumstances that define his characters so much that they're often under-developed—defined by whatever "Twilight Zone"-esque dilemma they're facing.

This is true of "Haunter," a haunted house movie adapted by Matthew Brian King from his novel. In "Haunter," Lisa ("Little Miss Sunshine" star Abigail Breslin), an angsty teen, relives the same day over and over again. "Haunter" is like "Groundhog Day" meets "The Lovely Bones:" while Bill Murray's Phil Connors repeated a single day so he could better appreciate his life, Lisa does the same thing because she's a ghost. "Haunter" has a solid setup, but the further Natali and King coax you into their labyrinth, the harder it becomes to appreciate what initially made their film so promising.

Because it is a movie-shaped maze—King acknowledges this in a leaden line of dialogue that compares Lisa's house to Pac-Man's maze—the best part of "Haunter" is the beginning. Eight minutes into the film, Lisa tells her parents what she thinks is happening to her: she's reliving the day before her 16th birthday on a loop. Lisa's parents understandably think she's joking, and ignore her. But soon, little details of Lisa's day start to change, like when her father Bruce (Peter Outerbridge) suddenly takes up smoking after dinner. So Lisa tries to break her routine up in order to understand what's happening to her. But she soon learns that she's reliving the day before she was murdered, and her killer ("Pontypool"'s Stephen McHattie) is about to strike again.

Before King explains why what's happening is happening, "Haunter" is exceptionally atmospheric. Its scenario plays to Natali's strengths in that its first two-thirds keep you guessing what will happen next. You want to know what's behind that little door, what's under the floorboards, and where those missing clothes got to. Both "Cube" and "Elevated," the latter of which is a short film set almost entirely in an elevator, proved that Natali knew how to make tense B-movies. "Haunter" mostly follows in that tradition. And for a while, Natali and King do a good job of distributing breadcrumbs to viewers whenever they need to. It's a sign of how good "Haunter" initially is that you always want to skip ahead, and know more than they're telling you.

But once "Haunter"'s story snaps into focus, and its creators pull you towards its inevitable conclusion, the film's flaws become that much more apparent. For example, "Haunter" is eventually about Lisa's struggle to understand and get free of her past. But since so much of the film's plot is about Lisa's varied attempts at breaking her routine, neither she nor her family members are developed beyond a point. Natali and King don't take enough time to show us who Lisa is. All we know is she wants to find out what's going on as much as we do.

The problem with that is "Haunter," like many horror films, is essentially a moral tale. Lisa learns more about her predicament by paying more attention to her family, and their respective routines. But beyond some clipped discussions with her kid brother Robbie (Peter DaCunha), and her mom Carol (Michelle Nolden), there's not much meat on "Haunter"'s bones.

It's accordingly kind of sad to see a young performer as talented as Breslin wandering around without much to do. Breslin is probably not strong enough to carry an entire film, but the material she's given to work with just doesn't hold together in the end. Lisa eventually has to stop being a cypher, and unfortunately, she never does. 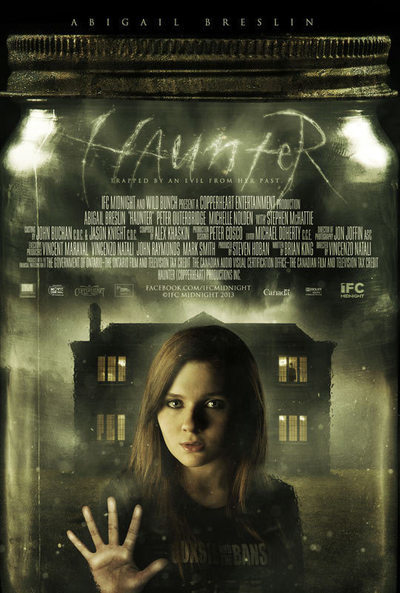 Stephen McHattie as The Pale Man