After seven earlier films reaching back a decade, the Harry Potter saga comes to a solid and satisfying conclusion in "Harry Potter and the Deathly Hallows: Part 2." The finale conjures up enough awe and solemnity to serve as an appropriate finale and a dramatic contrast to the lighthearted (relative) innocence of "Harry Potter and the Sorcerer's Stone" all those magical years ago.

Harry, Hermione and Ron are grown up now, and Harry has even grown the facial stubble required of all epic heroes. The time has come for him to face Lord Voldemort in their final showdown, and their conflict is staged in a series of special effects sequences containing power and conviction. I am still not sure what the bolts discharged by magic wands actually consist of, but never mind. They look wicked and lethal.

I dare not reveal a single crucial detail about the story itself, lest I offend the Spoiler Police, who have been on my case lately. Besides, you never know. Maybe they've completely rewritten J. K. Rowling's final book in the series. Maybe Harry dies, Voldemort is triumphant, and evil reigns.

What I can observe is that this final film is a reunion of sorts for a great many characters we've come to know over the years. So many distinguished British actors have played roles in the Potter films that those who haven't may be fitfully resentful. Here we see once again characters whose names were once new and now resonate with associations: Bellatrix Lestrange, Rubeus Hagrid, Professor Dumbledore, Ollivander, Lucius Malfoy, Sirius Black, Severus Snape, Remus Lupin and even Prof. Minerva McGonagall, who is called upon to summon her powers and shield Hogwarts School from the powers of Voldemort.

You don't want to know what happens to Hogwarts here. Many of its shining spires and noble gothic arches are reduced to ruin and ashes, providing an apocalyptic battleground. The school also seems to have mysteriously relocated adjacent to towering heights that permit vertiginous falls to the earth far below. There is no place in Britain that fits this geography, but then is Hogwarts quite in the real Britain?
What is does occupy is a Britain of the imagination. The series has remained faithful to J. K. Rowling's original conception, and resisted temptations to cheapen its action or simplify its complexity. She created a fictional world with its own logic and consistency, and here at the finale, there is some satisfaction in seeing loose ends tied up, lingering mysteries explained and suspicions confirmed.

In a dreamy sequence, we are allowed to see the characters as they were in the beginning. They were so young. By spanning something like real time, the story has grown older along with them. Daniel Radcliffe, born 1989, was 11 when he first played Harry Potter, is 21 now, and he and Ron Weasley (Rupert Grint) and Hermione Granger (Emma Watson) have luckily remained recognizable and soldiered on through what involved a great deal of hard labor. Not many young actors have been worked so relentlessly for a decade.

That said, it's apparent again in this film that the three leads are upstaged by the supporting characters. Their role is to be plucky, clean-cut and stalwart. They sneak around and observe things. They eavesdrop. They speculate. They are lectured to. They endure a little low-key puberty. Harry struggles to master his magic. Meanwhile, such British legends as Maggie Smith, Helena Bonham Carter, Michael Gambon, Alan Rickman and Ralph Fiennes steal scenes just by standing there. What chance does Harry or anybody have against Voldemort's smashed face with its nostril slits? Late in the film, leaving nothing to chance, Voldemort even appears as his own fetus, looking like it's been simmered in red sauce.

It is Fiennes' Voldemort who dominates this last installment, illustrating the old actors' axiom that it is better to play the villain than the hero. It takes a considerable villain to hold his own in the crumbled ruins of Hogwarts, and force the remaining students to choose between the friends of Harry or joining him on the dark side. Considering what has happened to Hogwarts, it's a little surprising that the students haven't been sent home, but then Dumbledore has had other things on his mind.

This movie is impressively staged, the dialogue is given proper weight and not hurried through, there are surprises which, in hindsight, seem fair enough, and "Harry Potter" now possesses an end that befits the most profitable series in movie history. These films will be around for a long time. And without spoiling a single thing, let me just observe that the final scene clearly leaves an opening for a sequel. I know, Rowling says there won't be one. Just sayin'.

Note: This entire movie is dark, gloomy and filled with shadows. So it should be. That makes it particularly inappropriate for the additional dimness of 3-D. There are a few shots that benefit from 3-D (I like the unfolding of the little magical globe) but none that require it. Avoid the surcharge and see the film in proper 2-D with brighter color. 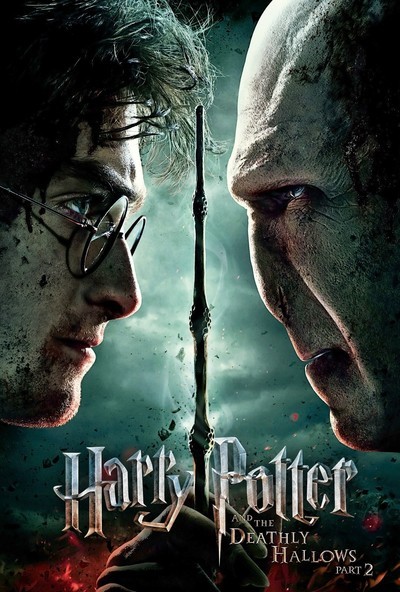