Dan Harmon, the creator of “Community,” star of the podcast “Harmontown,” and now subject of the film of the same name, is kind of an ass. He’d admit it. "Last Week" host John Oliver, formerly a cast members of the cult NBC comedy, describes him as “A human hand grenade who has a tendency to pull his own pin out.” Sarah Silverman goes into detail about how difficult he can be to work with, and how that difficulty sabotaged their collaboration. And you should hear the stories his girlfriend tells on the podcast. The best elements of the documentary “Harmontown” capture the unique raw energy of Harmon. Most people in Hollywood are overly concerned about what you think of them. Harmon is the kind of guy who admonishes hecklers who scream out “I love you” because he doesn’t love himself.

After the third, low-rated season of “Community,” NBC made a tragically stupid decision and fired the creator and voice of the show. I realized the error in that call at the time, especially after seeing how much the show rebounded creatively when Harmon returned for the fifth season, arguably the show’s best. However, I mistakenly just thought that it was because Harmon was a good TV writer. That’s not it. As is made clear by “Harmontown,” Dan Harmon's very essence is reflected in “Community.” In the simplest of forms, Harmon is protagonist Jeff Winger (Joel McHale), the guy who can be a total jerk sometimes but also embraces and protects those who are close to him.

But the affinity between creator and series goes deeper than that. “Community” is about outcasts, and it is outcasts who have been drawn to Harmon through his podcast and the tour he went on after NBC fired him. As is the case with Patton Oswalt and Kevin Smith, fans see something uniquely relatable in Harmon onstage. They may think, He looks like a friend of mine; he has my problems; if he can get up there and talk about his life, mine might not be so bad.

“Harmontown” has echoes of “Conan O’Brien Can’t Stop” and other documentaries about entertainers who are hard-working to the point of self-destruction. The main difference is the sense of discovery on display here. Harmon was kind of let loose after the “Community” debacle, although he was supposed to be working on pilot scripts for CBS and FOX, so he decided to see what his hit podcast would feel like on the road.

The first few shows were not good. In fact, I would argue most of the shows aren’t traditionally “good.” What they are is raw. People play D&D on stage. Harmon drinks moonshine. He crowd-surfs. He does as he feels in the moment. He is just trying to make contact with people, his fans. Seeing those fans lose their minds is fun. The look on the face of a young journalist after interviewing Harmon is priceless, like that of a kid meeting Mickey Mantle in his prime.

It could not have been easy to make the self-described “Oprah of Ineffectual White People” interesting for the length of a feature. Harmon would admit he’s not the best stand-up or on-stage performer. He's a writer trying something different. The result is more of an experiment than an accomplishment, which can be difficult to capture in a feature-length documentary. The movie is primarily a piece of fan service aimed at those who love the podcast and “Community.” But even if you bear that in mind, "Harmontown" can still feel as unfocused as one of Harmon’s monologues. Just as the tour was more of an experiment than an accomplishment, so too is the documentary commemorating it. I wish it were tighter, more like the brilliant sitcom that Harmon created and less like his podcast. The final half hour gets a bit more “warts and all” about Harmon's anger issues and is fascinating, but it takes too much D&D to get there. I suspect that a 20-minutes-shorter version of “Harmontown” would have been more entertaining and effective, but if a note like that came from a network suit, Harmon would probably ignore it. 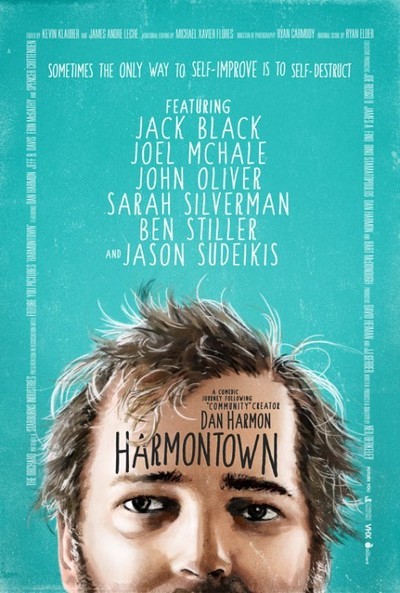