Hard to Be a God

There’s no getting around it: “Hard To Be A God” is one of the most consistently disgusting films ever made. On completion of some explanatory opening titles, the movie depicts a dank, grim, perpetually chilly and humid medieval world. A couple of extras are seen, splattered in mud, but on consideration, the viewer can’t be sure it’s mud. What came to mind for me was the immortal exchange from “Monty Python and the Holy Grail,” as two characters watch a spotless Arthur pass: “Must be a king.” “Why?” “Because he hasn’t got s**t all over him.”

In this movie, neither king-dom nor dukedom nor God-dom confers any such sort of privilege. Also, everyone in this movie has a horrible cold, because everyone has liquid or snot or some combination thereof dripping from his or her nose and/or is hocking up and spitting softball-sized wads of phlegm. It just never ends. I’m not even getting into the misshapen naked bodies, the mutilating mortal wounds suffered by characters throughout, the hung corpses festered with I can’t even tell you what, and, oh, the spilling intestines. You think maybe because it’s in black-and-white that it’s not gonna churn your stomach, but no: the integrity of the special effects is such that it’s likely that you’ll stop thinking they’re special effects after a while, and the unrelenting nature of the grotesque atmosphere is just too effective.

Sounds great, right? You can see why I gave it four stars. And yet I will insist: “Hard To Be A God,” the final film by the inspired Russian director Alexei German—a film he spent four decades planning and a dozen years making, a film he did not actually live to complete (post-production was handled by his widow and his son, both close longtime collaborators of the filmmaker)—is not only an unforgettable individual masterpiece but probably one of the capital-G Great Films. You’ll need a strong stomach and another kind of endurance to sit through it, as it’s nearly three hours long and is more than a little oblique in its approach to narrative (I know, it just keeps getting better!), but once it is over you know you’ve really had an experience. An experience very different from watching an average or even a very good conventional film.

Some background: Like his contemporary Andrei Tarkovsky, Alexei German was only able to make a handful of features in his career, which began in the ‘60s. His first solo directorial effort, 1971’s “A Trial On The Road,” is both one of his most accessible films and a persuasive piece of evidence that nobody does the war movie better than the Russians. Snow, stale and scarce cigarettes, random acts of violence and interludes of terror; “Road” has them all, and in spite of its “victory is ours” coda, this WWII chronicle got banned for 15 years. “Hard To Be A God” is more in the mode of German’s delirious 1998 “Khrustalyov, My Car,” in which a gregarious, hard-living doctor is subject to unspeakable humiliations during the last days of the Stalin regime. Stalin hangs over “Hard To Be A God” like a mordantly chortling specter.

The movie is adapted from a novel by Russian sci-fi masters Arkady and Boris Strugatsky (whose “Roadside Picnic” inspired Tarkovsky’s visionary, disagreeable “Stalker”). “Sci-fi? But didn’t you mention a ‘medieval’ setting?” is maybe what you’re asking. Indeed I did. The conceit of “God” is a rather pointedly allegorical one: Earth scientists have been secreted on a planet much like our own, one that is going through its own Middle Ages, and the movie tells the story of one such scientist who is powerless to stop the ruling class wipeout of what’s called the intelligentsia—that is, anyone among the population who can read or write. The focus of German’s movie is one such scientist, Don Rumata, played with admirable diligence and droll irony by Leonid Yarmolnik. He’s “disguised” as a nobleman who some inhabitants believe to be descended from a god. And in his real-life capacity as something close to a god, he’s appalled by the power plays going on around him, but helpless to stop it.

D.R. is an unusual hero; he has a sybaritic insouciance that makes him a soulmate of the lead character of “Khrutalyov.” He’s a good man but not a particularly righteous or self-righteous one. As the casually vicious forces of darkness wreak havoc on the learned, he’s at first bemused, and also ill-advisedly confident; things can’t be that bad, he seems to be thinking quite often. The action is a little hard to follow at times because of the way German throws the viewer into it; more often than not the camera seems to function as an unseen observing character, and a lot of the actors will look directly into the lens, make some facial indications, or even speak to the camera. One finds oneself in a problematic relationship to the screen—am I supposed to talk back? And then there are the things in the frame getting in the way of what one is supposed to be looking at: hanging sausages, hanging bodies, all sorts of obstacles.

Behind them, though, is production design that is utterly convincing. The signal achievement of “Hard To Be A God” is its utterly, nightmarishly convincing simulation of a whole new world. The movie is in a sense a trip to hell, but the torture we witness is not doled out gratuitously. German cannot exorcise the torment of Stalinism from his consciousness; instead he uses art to communicate the reasons it existed and the way it felt for those victimized by it. “Hard To Be A God” is a fantastical examination of man’s inhumanity to man, and as replete as it is with persistent visceral disgust, it also pulses with intelligence, a mordant compassion, and yes, incredible wit. Its vision is so monstrously realized that even as it repulses, it makes almost any other film you would care to put next to it seem puny, silly, unnecessary. It is a demanding work, in every sense of the word. But it also gives back as much as it wants from you. 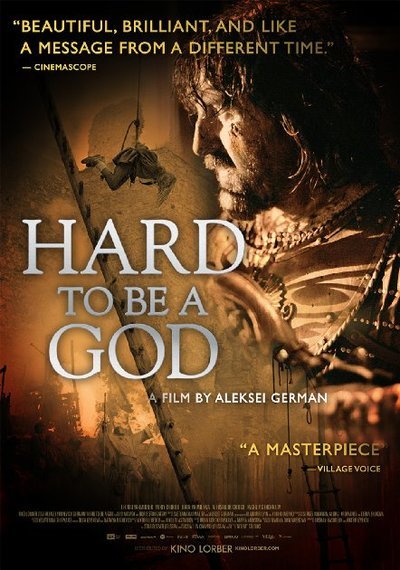