“Halston” is an empathetic portrait of someone you wouldn’t want to work for, be in love with, or trust a great deal of money with. The American women’s fashion designer, an “artist who liked to spend money,” was audacious to put it lightly, and so too is this compelling epic about ego that embeds you in his world of brilliant designs and self-sabotage. It doesn’t hurt that it has a career-best performance from Ewan McGregor as its center, who approaches the grandeur of Roy Halston as if the fashion designer were an actor, and matches the power of this artist who only wanted to be known by his middle name. And along with exquisite costume design in depicting Halston’s rise and fall from the ‘60s to the late ‘80s, the five episodes are told with restraint and focus by director Daniel Minahan, which is not something often said about other projects from “Halston” executive producer and co-writer Ryan Murphy.

The series jumps right to the beginning of Halston’s ascendance, so much that his famous design for the pill box hat worn by Jackie Kennedy is a blink-and-you’ll-miss-it detail, despite the importance it had to getting Halston’s name and fashion into the mainstream. It is framed here as a moment in which Halston’s narcissism wins, but funding is still a problem. The pleasure of this captivating series is getting to see what he does with the opportunities that are given to him, especially when massive companies with seemingly good intent like Norton Simon (given a face by Bill Pullman as chairman David Mahoney) convince him to let them use Halston’s name.

But Halston didn’t achieve this success alone, even if it takes Halston four episodes here to realize that as part of his emotional journey. The story builds around him a group of up and comers in the scene, who make their own contributions, and are performed with their own compelling grace across the board. There’s Elsa Peretti (Rebecca Dayan), his go-to model; or Joe Eula (David Pittu), an illustrator who becomes like an angel on Halston’s shoulder throughout tough decisions. Rory Culkin appears in the earlier episodes as a young Joel Schumacher, who provides the material that Halston then handles with a magic touch. Throughout the series, Halston’s ability for genius cutting and sculpting is on display, but part of the very drama about the series concerns how certain breakthroughs were not exactly his own.

A great example of this comes from fashion history, as with the Halston teardrop perfume bottle. Peretti is shown designing it after a necklace she wore, after Halston insisted on making. He gets pushback from Mahoney that the design isn't logical or factory assembly-friendly, but nonetheless, Halston was right. The bottle is a hit. And yet this success did not create an openness; it fueled Halston's stubbornness as a businessman and an artist. Halston’s life decisions become a dirge that the series embraces, especially as he’s presented with numerous doors that could have lead to more commercial success.

The group does have a not-so-secret weapon in Liza Minnelli, a long-time friend of Halston’s. Played here by Krysta Rodriguez, it’s a splashy, charming performance that has the same air of tribute as McGregor’s work, but has more outward fun with recreating Minnelli’s presence on stage or as a star. “Halston” nearly relishes the role as a means to cut loose, especially when she's introduced performing a full blistering routine to the song “Liza with a Z.” It can be a welcome change-up from the energy of the movie, to get to adore a star while having far less caveats.

But even with its cast, the tight writing within the 250-minute miniseries always goes back to Halston. In particular, McGregor as Halston, a vital spectacle that one must be fascinated by in order to get into the series, even if the overall likability of Halston is rarely hammered in. McGregor treats Halston as a piece of art, a complex being with always more behind his moments of hubris and genius. A major breakthrough for Halston is presented early, in which he realizes he can slick his hair back, don sunglasses, and lower his voice. It's a presentation of power, and a costume. There could have been more from this script about how he came to these ideas, but such a moment is telling and adds to the richness of what McGregor is trying to do.

The series’ larger avoidance of young flashbacks—which becomes a bit of a gap in the few instances it does—is nonetheless answered by McGregor’s work. What was Halston the younger like? You can trace it to McGregor’s face, the way he relishes being able to have control and power in the office, but sometimes seems scared by the bare-chested sexuality of escort and artist Victor Hugo (Gian Franco Rodriguez). Hugo was Halston’s lover and just one piece of Halston’s long history of transactional, protective relationships. One of McGregor’s most fascinating additions to the image of Halston is that of palpable, guarded insecurity, albeit for someone who would become so self-destructive and later lose the power of his brand name in part because of what ego he had.

“Halston” shows off McGregor at his most sensitive and sensorial, on a level close to when he played Jesus Christ wandering the desert in the experimental “Last Days in the Desert.” It’s the way that Halston holds his long cigarettes as if made of glass, accompanying impeccably perfect posture. Episode three brings this out especially, with Halston experiencing vivid sense memory and tearful reactions as he chooses smells for his famous perfume (with an excellently cast Vera Farmiga as a pseudo-therapist and perfumer). It’s the deepest dive the miniseries does into his repressions, and it comes from McGregor’s brilliant, full-bodied take on the character.

A lot of the series’ later passages, especially in this downfall, show Halston at his most self-sabotaging, focusing on luxury or ego instead of creating. “Fashion moves fast,” as Mahoney says, and the competition with Calvin Klein and other names gets out of Halston's hands quickly, as do his vices of doing cocaine and blowing deadlines. Such scenes exemplify how McGregor approaches this character with complete empathy, embracing how that factor is needed for an actor, or viewer, to connect with such a character. But “Halston” presses on that a great deal, with numerous examples of his gross exorbitance (flying his dinners on a private jet from Manhattan to Montauk), or his stubbornness as an artist to barely do work. Some viewers may not see him as a hero or an artist, and some might even see the project itself as tone-deaf. That becomes a type of litmus test to sticking with “Halston,” which loves its character deeply but also presents his crash in visceral slow motion.

But the world around Halston is captivating, with intoxicating, music-driven sequences that capture the grandeur of Halston's reign in the '70s, and there's a stunning recreation of his famous Olympic Tower studio and showroom, a glass castle in New York City overlooking a cathedral. And Minahan has a sure hand with moving Halston between different friendships, unfolding intimate scenes that show how these people have their own lives and would create their own legacies away from him.

In 2019, Frédéric Tcheng made a documentary about Halston (also titled “Halston”) which would pair nicely with this series. This one seems even less interested in guaranteeing its viewership, or in telling the full story (Tcheng’s doc even has a narrative about a woman, played by Tavi Gevinson, discovering Halston as if he were a secret locked away). In its own way, Minahan’s series handles Halston and his many secrets with adoration, and awe. But he remains an enigma, an appeal that McGregor and this miniseries treat like fashion: you either feel it too, or you don't. 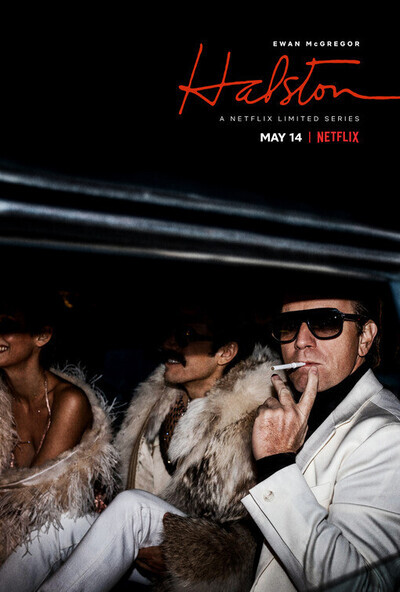 Writer (based on "Simply Halston")