"HairBrained" is painfully contrived and self-consciously quirky from the word go. It has the audacity to borrow liberally from far superior comedies—"Rushmore," specifically—without contributing much in the way of originality or believability.

The cruelest irony of all: It's a movie about a child genius which the child genius himself probably would find dull, flimsy and unfunny.

Alex Wolff stars as the aforementioned mega-brain, who introduces himself to us early as part of the film's copious and obvious use of voiceover: "Hello, my name is Eli Pettifog. I'm 13 years old. Today is my first day of college." Eli's defining trait, besides his comparative youth on campus, is the massive mop of messy dark hair atop his head. It calls to mind The Cure's lead singer Robert Smith, circa 1986; it also suggests what "Rushmore" hero Max Fischer might look like had he stuck his finger in a light socket.

The reason behind the 'do: It protects his brain. Hence the film's title. But rather than making Eli seem like an intriguing and complicated figure, the hair feels more like a distracting affectation–one more method of turning him into a lovable oddball, in theory.

On his first day at Whittman College, a small, East Coast liberal arts school, Eli's sloppy mother can't be bothered to escort him personally. Instead, she drops him off at the bus, explaining: "I wanted to take you, but I'm just. So. Tired." She's played by Parker Posey, star of director/co-writer Billy Kent's 2006 comedy "The Oh in Ohio," and Posey gets about three lines of dialogue in a wasted opportunity to inject some real comic talent. (The formidable Fred Melamed similarly is underused in a minor role as a bookie.)

Once he arrives on campus, plot devices dictate that Eli must connect with his exact opposite: the overgrown slacker across the hall at his dorm. He's 41-year-old fellow freshman Leo Searly, who's going back to school to earn a degree after throwing his life away gambling. Brendan Fraser plays him with a party-boy glibness that's vaguely reminiscent of Val Kilmer in "Real Genius," another movie from which "HairBrained" borrows. (Kent co-wrote the script with Sarah Bird and Adam Wierzbianski.)

When we first see Leo, he's parked in his Mercedes Benz convertible, pounding a beer and pondering which sports electives to take. When Leo and Eli introduce themselves to each other, it's with the respective, self-assigned tags of "late bloomer" and "child prodigy." As one does. Immediately and out of nowhere, the two become the absolute best of friends, even though neither of them seems even remotely like a real human being.

But Eli also forges somewhat of an identity by joining the school's Collegiate Mastermind team. With his vast brain full of otherwise useless trivia, he soon becomes its captain. His real intent, though, is to beat Harvard—his dream university, which rejected him. And so as Eli and his teammates trounce school after school (Amherst, Vassar, NYU, MIT), they walk in slow motion in matching, preppy blue blazers to alt-rock music. Sound familiar? As if that weren't enough of a "Rushmore" rip-off, the group even has its own sweet, smart Margaret Yang figure, played by Greta Lee.

Other supporting players who supposedly are instrumental to the main characters' transformations are barely fleshed out in the first place, then they disappear for such vast stretches of time that you're likely to forget about them completely. Leo's girlfriend, whom he meets at a fraternity party, may not even have a name. Eli's girlfriend, a perky townie played by Julia Garner, is essentially your standard Manic Pixie Dream Girl.

But Eli has no real struggles, no conflict, so it's hard to get a handle on him or care about whether he succeeds. His status as an anomaly makes him a bit of a celebrity on campus, which allows him to win over the sexiest girl in school (Elisabeth Howser), her idiot-jock boyfriend (Michael Oberholtzer) who bullied him in act one, and everyone in between. Meanwhile, moments that are meant to be substantial, such as Leo's awkward reconciliation with his estranged, teenage daughter, instead ring awkwardly shrill and hollow.

The only questions that remain as "HairBrained" limps toward its lifeless ending: Will Whittman win the Collegiate Mastermind championship? And will Eli keep his mass of hair, now that he knows how to protect himself? You don't have to be a genius to figure it all out. 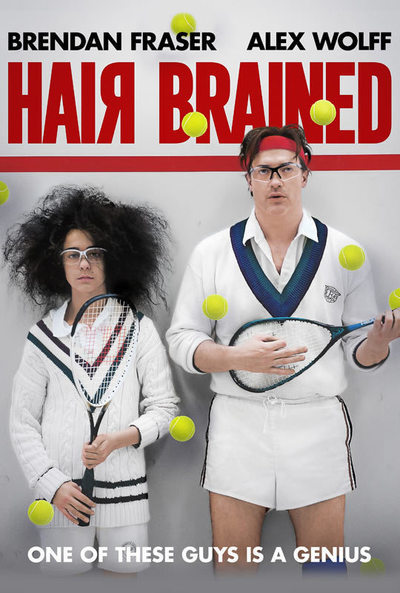