What a strange world it is that we consider normal. What daily details do we fail to notice; how delicate are our routines? These questions are exemplified by the two couples at the heart of the mysterious, perplexing "H." One is an older pair, set in their ways and in their fantasies. The younger set is unsure of their relationship and the onset of a baby. Both seem normal to the strangers around them until they, and we, take a closer look.

The first couple looks to be living out their retirement in Troy, New York, in relative peace and quiet, but Helen (Robin Bartlett) is playing the role of a mom to a “Reborn doll,” an eerie lifelike thing she feeds, changes, and makes parenting videos of. Her husband Roy (Julian Gamble) tolerates it, but looks to have a life outside of their relationship and Helen’s fantasy. Likewise, the working artist couple of Alex (Will Janowitz) and Helen (Rebecca Dayan) is equally ill at ease. Although they work together and seem like the picture perfect artist-muse pair, she’s four months pregnant and expects her partner to disappear at any moment. Both of these couples’ lives are shaken by the unexplained meteor shower that rocks their small worlds and threatens their relationship in a way their complacency never did.

The opening sequence clues viewers into some of the movie’s themes fairly early on. The camera closes in on the conception of baby dolls on a conveyor belt, watching each lash carefully threaded and limbs popped into place. It’s slightly unnerving but no more so than watching the elder Helen dutifully rise at all hours of the night to feed her unmoving babe, or the younger Helen instinctively reach for her belly obsessively. There’s a strong sense of anxiety surrounding motherhood in this film; how each woman reacts to it can both entrance and estrange the viewer.

At some points, “H.” is pushing to prove its experimental chops as profound concepts. If you hadn’t already made a guess about where the Helen of Troy nod stems from, “H.” openly plays with aspects of the Greek epic. There’s a  motif of a cantering black stallion in the film. It's seen three times in the movie—twice as the animal seen by each male partner and once as a man costumed as the horse (Greek gods occasionally changed into animals or mortals for various reasons). Perhaps it was the Trojan Horse bringing mayhem into these couples’ lives. Yet the heavy symbolism can get in the way of what the film has to say about its central relationships.

There’s also a reappearing Greek head floating down the Hudson River. We don’t know much about it, why it’s floating down the Hudson, or what it has to do with either couple. It’s just another strange thing tucked into a series of banal couple problems and extraordinary celestial events. The floating head is perhaps one of the most striking images in an already heavily stylized film, a listless sphinx telling us no more or no less than what we come up with ourselves.

“H.” can look extravagant but not in every scene, obtuse but not wholly incomprehensible. It is an enigmatic film, full of story and conflict, yet spacious enough for our thoughts to fill the unclaimed space. Directing team Rania Attieh and Daniel Garcia have created something special even if it is a touch difficult to grasp on a first watch. Themes meant to be universal can be alienating at the same time.

“H.” doesn’t see fatherhood in a positive light, as evidenced by the two men who look ready to leave the caregivers in their lives. Likewise, motherhood seems more like a kind of mental illness than it is just another stage of life. Make of that and the floating Grecian head what you will. 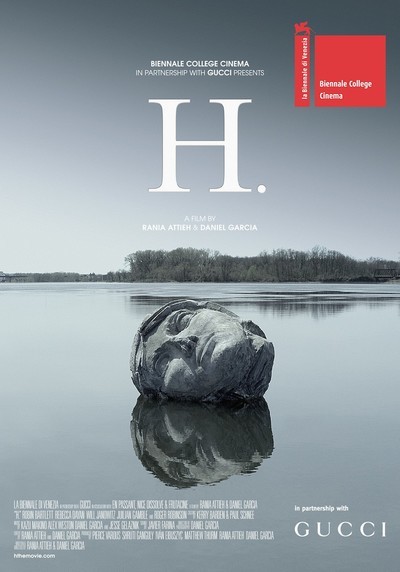 Will Janowitz as Alex