Decades before his name became instantly associated with macabre wonder, Guillermo del Toro conjured up accomplished special effects makeup for Mexican productions. Now, with an esteemed body of work as a director, it's still the tangible handcraft that distinguishes his monstrous brainchildren from those conceived solely as digital confections.

Del Toro's creatures exist as entities in this plane of reality—often in the body of Doug Jones as in "Pan's Labyrinth" and "The Shape of Water." They take up space, react to light, have complex textures, and interact with actors in human roles. But as sophisticated as their configuration seems, they obey cinema's longstanding tradition of engendering fanciful worlds in front of the camera with practical ingenuity.

Del Toro's lifelong commitment to turning the figments of his imagination into physical realities makes his decision to opt for stop-motion for his first animated feature an obvious and perfectly suitable one. Glorious in its tactile fabrication, his "Pinocchio" epitomizes the melding of tale and technique into a cohesive philosophical unit. For a story about imperfect fathers and sons, this method capitalizes on the irreplicable quality of the human touch one frame at a time.

Decidedly more mature in tone than previous animated iterations of Carlo Collodi's 19th-century fable, though no less stirring or disarming, this version penned by del Toro and co-screenwriter Patrick McHale (creator of the miniseries "Over the Garden Wall") transports the characters first just a few years into the future to the early 1900s, as the Great War ravages Europe. The peaceful countryside is home to chipper woodworker Geppetto (David Bradley), to the townspeople, "a model Italian citizen," and to his 10-year-old son Carlo (Gregory Mann), an obedient boy who fulfills all of his father's expectations.

But like a cruel stunt from the heavens, a bomb, not unlike the one that falls on the orphanage in "The Devil's Backbone," takes Carlo from Geppetto, destroying his once idyllic outlook. A fabulously cast Ewan McGregor voices Sebastian J. Cricket, a pompous insect initially only interested in recounting his feats, who narrates the tragedy. Grief-stricken still years later, with Mussolini now in power, Geppetto carves a puppet from the pine tree near Carlo's tombstone in a drunken stupor that plays out with the uncanniness of a "Frankenstein" movie.

Pinocchio (also Mann) gains consciousness by the hand of the Wood Sprite (the always alluring Tilda Swinton), a new take on the Blue Fairy that resembles an angel as described in the Old Testament—think Angel of Death in "Hellboy II: The Golden Army." This winged figure, and the beguiling chimera that represents Death later in the story (also Swinton), illustrate del Toro's interest in the otherworldly forces that affect mortals' paths on earth, as well as a singular vision of the afterlife, just not those prescribed by modern Christianity.

"In this world, you get what you give," the fantastical do-gooder tells Sebastian, tasking him with Pinocchio's moral guidance in exchange for a wish. The cricket replies, "I try my best, and that's the best anyone can do." Del Toro and McHale feature multiple pithy refrains like these, which avoid repeating fairytale platitudes based on impossible rectitude. Instead, they advocate for the wisdom found in forgiving oneself for the mistakes of the past because it's in between failures and triumphs that our lives are written. Precisely how the illusion of stop-motion animation occurs in between the frames that remind us of what we are witnessing is painstakingly executed cinematic puppetry.

Unlike the face replacement technology that some studios such as Laika employ to achieve nuance in the performances of the stop-motion puppets, del Toro and co-director Mark Gustafson, who honed his skills with Claymation master Will Vinton, utilized figures with mechanical visages that require delicate manipulation from the animators for a slightly less immaculate result in movement, but one that makes the hand of the artists known.

One can't help but marvel at the superb craftsmanship in every detail of the characters that inhabit this darkly whimsical realm. Every hair strand on Geppetto's head, the wrinkles in his weathered artisan hands, or the material of his garments are individual, minuscule strokes of genius. The design of Pinocchio himself feels elemental, with the organic blemishes of real wood, without clothing, and sporting a mischievously adorable face and an explosive hairstyle. This might be the most truthful on-screen depiction of the character ever. In the breathtaking dedication of those in charge of the production design, the costumes, and the constructions of the sets, large and miniature, the film finds its soul.

Yet as innocent as Pinocchio is—early on, he sings about every object he encounters as an incredible discovery—there's an abrasive side to his personality that resonates honestly with the less flattering aspects of children's behavior. Not only is Geppetto not immediately accepting of his new offspring, given that the Catholic churchgoers believe it to be sorcery, but he hopes to mold him into who Carlo was.

But Pinocchio, born without the inhabitations of the human condition, only conforms to the norms to gain his father's validation. Del Toro is nothing if not a gentle champion of the misunderstood to those whose appearance, origin, or worldview isolate them from the homogeneity of the masses. And in this wooden boy, he finds a walking and talking symbol for the indomitable power of nature, of chance, of the unpredictable factors that can enrich our days even if they weren't precisely what we had hoped for.

Fascism, a dangerous ideology that demands submission while it derides uniqueness, is explored via personal relationships. In failing to accept their sons for who they are and not who they wish them to be, all the fathers in "Pinocchio" partake in its perverse dynamic of control: Podesta (Ron Perlman), a government official raising his kid, Candlewick (Finn Wolfhard), with strict discipline; the villainous puppeteer Count Volpe (Christoph Waltz) and his mistreatment of his baboon sidekick Spazzatura (Cate Blanchett); and even a cleverly ridiculed Mussolini (Tom Kenny), as a father figure for an entire nation.

Organized religion seeks similar servitude, holding one's missteps against us as a reminder of our unworthiness and why we should listen to the teachings of its ancient practice. A wooden Jesus on the cross, the image of a faultless god, looks down on its sinful flock.

Its critique of Catholicism notwithstanding, del Toro and Gustafson's "Pinocchio" remains a striking spiritual experience. Its emphasis on the material, in what we can see and feel, in the here and now—defects all—speaks to the notion that our brief time alive isn't measured in faultless accomplishments but also in the precious glimpses of the divine we carve from the rubble left behind by personal and collective catastrophes. Despite the sorrow that comes with our flesh-and-blood constraints, we replenish our will to go on.

At some point, the expertly plotted narrative veers its sights to teach Pinocchio, who is unable to die for a while, a lesson on why mortality is both a curse and a gift. That Carlo and Pinocchio are both voiced by Mann, while Swinton enlivens both the Wood Sprite and Death, denotes a marked duality at play about what was but no longer is and what wasn't but now exists. Two sides of the same coin remind us that loving is a burden worth carrying, life is an ordeal worth dying for, and that in the crevices of all which we consider that make us misfits, we can find pockets of happiness with others like us.

With the screenplay's unassumingly poetic final line, Sebastian casts a lovingly life-affirming spell, a phrase that applies to the entirety of the piece, noting that even the artists behind this production will someday also die; only their stories will endure.

A wondrously affecting work, "Pinocchio" becomes a magnum opus for del Toro that channels his interests and beliefs long present in his oeuvre but spun with a luminous new gravitas. It may go against its ethos to deem del Toro's "Pinocchio" an impeccable masterpiece, even if that's an adequate description, but know that if the art of making movies resembles magic, this is one of its greatest incantations.

In limited release now and available on Netflix on Friday, December 9th. 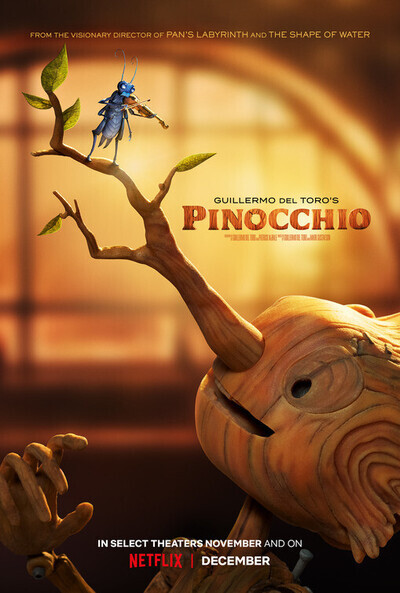 Ron Perlman as The Podestà (voice)