According to Tom Arnold, kangaroos were hopping about, and there was even a 600-pound tiger in attendance.

"Poot the tiger in dah pool!" commanded Schwarzenegger, according to the story, and indeed, the tiger wound up in the pool.

So basically Arnold Schwarzenegger celebrated his 65th birthday with a true-life rendition of "Life of Pi." Has anyone lived a larger, more cartoonishly voracious version of the immigrant American dream than this guy?

It stands to reason Schwarzenegger would return for his first starring role since 2003 with a BIG bang — in fact, an entire movie filled with one big bang after another. To call "The Last Stand" gratuitously violent is to pay the movie a compliment. It's sort of the whole point.

If you've got violent-movie fatigue, and you're too exhausted from real-life carnage on the news to enjoy an R-rated blood-fest in which a number of kills are executed as deliberately funny visual punchlines, you do not want to go anywhere near this film. But if you're a fan of stylish, relentlessly loud shootouts, questionable plot developments be damned, this is your ticket to weekend escapism.

Nearly 30 years after the original "Terminator" made him one of the most unlikely and most popular movie stars of our time, Schwarzenegger still has that thick Austrian accent, which somehow makes him more endearing, especially when he's playing a former highly decorated Los Angeles cop named Ray Owens. Really? He was given that name at birth?

At 65, Arnold in some ways resembles a cyborg more than ever. His skin is pulled back so tight, his eyes are mere slits; his shoulders are sloped with age but his arms are still huge. Schwarzenegger is still a formidable albeit self-deprecating presence onscreen. Responding to the deadpan question, "How are you?" after one violent dustup, Ray simply replies, "old." And in an exchange of insults and punches with a bad guy from Mexico, he says, "You give immigrants like us a bad name."

Ray is now in semi-retirement as the sheriff of the sleepy Arizona border town of Sommerton Junction, an outpost so small and inconsequential I'll bet even that the Google car hasn't driven through yet. Ray's three-person force of deputies includes human bowling ball Luis Guzman as Mike, ever ready with the comic relief; Jaimie Alexander as the tough and lovely Sarah, and Zach Gilford from "Friday Night Lights" as the earnest but bumbling Jerry.

With the high school football team playing a big game out of town, Sommerton Junction is conveniently deserted, save for a few stalwarts at the diner and maybe a farmer or two on the edge of town. Looks like a quiet weekend!

As we get to meet the town's likable cast of characters (including a zany gun enthusiast played by Johnny Knoxville), there's a parallel story taking place in Las Vegas, as FBI agent John Bannister (Forest Whitaker) marshals a team of elite law enforcement personnel tasked with transporting Gabriel Cortez (Eduardo Noriega), who we're told is the most notorious drug lord since Pablo Escobar.

Those transport-the-dangerous-prisoner missions never work, do they? Soon Cortez is behind the wheel of a souped-up CORVETTE, and if you don't know it's a CORVETTE, you'll get constant reminders it's a CORVETTE. Boy, is that CORVETTE fast!

The title tells us "The Last Stand" is a modern-day Western, borrowing elements of "Rio Bravo" and a dozen other films. Of course, there are myriad ways in which the government should be able to stop the drug lord from making it across the border in his CORVETTE, but we get a few throwaway lines (and more than a few explosions and car crashes) that pave the way for the big showdown pitting Ray and his ragtag deputies against the drug lord's heavily armed battalion of thugs, led by Peter Stormare.

"The Last Stand" marks the American debut of the Korean director Jee-woon Kim, who delivers a half-dozen quality kills that will leave audiences squirming and then laughing at the sheer audacity of it all. With all the high-speed chases and ear-shattering explosions, perhaps the most exciting and tense scene features two high-powered cars playing a game of cat and mouse while slowly rolling through a cornfield. (There's an overhead shot during this sequence that's just hilarious.)

This is what Arnold does best: big-gun violence and one-liner laughs. He's still got it. I don't know why Johnny Knoxville gets equal billing on some of the film's posters, seeing as how he has a mercifully short role. (Knoxville's fine at playing Knoxville, but a little of that cackling lunatic shtick goes a long way.) Maybe the studio figured the original "Jackass" would help pull in a younger audience.

Like the FBI agents and the drug lord in this movie, they shouldn't underestimate Arnold's ability to get the job done on his own. 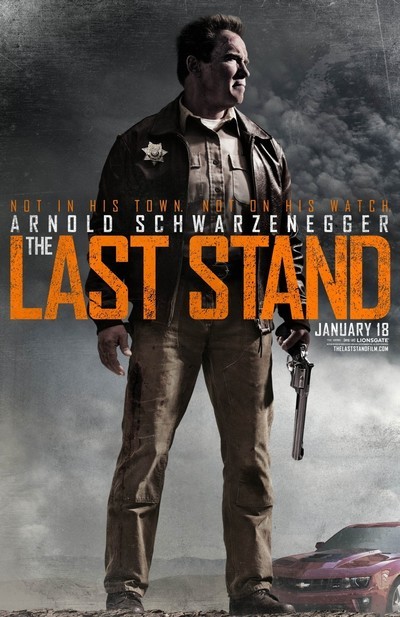 Rated R for strong bloody violence throughout, and for language