“Pleasant surprise” might be a misnomer for “Gringo.” The comedic thriller plays rough, and is replete with violent moments of eye-opening nastiness, including an edited-in-the-nick-of-time near-depiction of a toe amputation. The “pleasant” aspect resides not in the content but in the fact that this movie, which appears to be getting the kind of theatrical release industry experts and wannabe industry experts (talk about a distinction without a difference these days) call a “dumping,” is in fact a largely fun watch, a corporate crime tale of consistent tartness enacted by a superb cast.

That cast is the first thing that makes the not-badness of “Gringo” a little less of a surprise. How wrong can you go with David Oyelowo, Charlize Theron, Amanda Seyfried, Thandie Newton, Joel Edgerton, and Sharlto Copley, anyway? Well, if you’ve seen enough movies, you know a good cast doesn’t necessarily guarantee anything. And if you haven’t seen “Hardcore Henry,” I will not accept you raising an eyebrow at my including Sharlto Copley as part of a “good cast.” In any event, all these luminaries do stellar work, as do supporting players ranging from Alan Ruck to Paris Jackson (yeah, that Paris Jackson).

Oyelowo is the title character, Harold, who has a mid-level job at a Chicago pharma company whose co-president is his supposed best friend, Richard (Edgerton), whom he’s known since college. Early in the picture Harold’s accountant Stu (Bashir Salahuddin, memorable in a brief role) warns his client and buddy that the rug is about to be pulled out from under Harold, corporate-wise. Harold confronts Richard, who responds with a ridiculous pseudo-parable about carrots and bananas. Richard and the company’s co-president Elaine (Theron), a relentless climber with ice-water for blood who not only has no compunction about flaunting her secondary sexual characteristics for career gain but may in fact have no idea what the word “compunction” even means, join Harold for one of his periodic jaunts to Mexico, where the company has a plant.

That plant makes marijuana in a pill form. As you can imagine, it is a much envied formula, and concurrent with Harold and company’s trip, a guitar-shop semi-loser (Harry Treadaway), with his aptly-named girlfriend Sunny (Seyfried) in tow but not aware of what’s happening, is down in Mexico City to try and steal it.

As it happens, Harold’s accountant is not just right, he’s only got a part of the big bad picture. Richard and Elaine have been offloading a portion of their inventory to a Mexican drug cartel to raise much need cash. Now that they’ve found a partner for a merger, they want that stopped. Their Mexican plant manager, Sanchez (Hernán Mendoza) explains that the “Black Panther,” the head of the cartel, is not someone you just cut off like that. Richard and Elaine are less than sympathetic. Looking at the multiple picture of children on his wall, Elaine asks if they sell condoms in Mexico. That’s the kind of gal she is.

Sanchez goes to the Panther, who quizzes him on what the best Beatles album is before getting down to business. The business does not go well. As for Harold, whose thumb happens to be the only one that can open the plant vault that contains the formula for the wonder drug, once he figures out the extent to which he’s being played for a stooge, he decides to turn the tables. This, initially, does not go well.

Revealing more plot points than necessary would be spoilerish in a spiteful way, especially considering the bang that the movie begins with. Suffice it to say that the complications also include Harold’s wife (Thandie Newton), who’s keeping a secret, and Richard’s brother Mitch (Copley) a reformed mercenary who is not entirely closed to being tempted back into corruption. The toe business and the drug-cartel-king who’s into pop culture may ring some bells, suggesting that this movie, written by Anthony Tambakis and Matthew Stone from a story by Stone, is some kind of Coen/Tarantino pastiche. As it happens Stone collaborated on both “Intolerable Cruelty” and “Destiny Turns on the Radio” (what, you don’t remember Quentin Tarantino’s big acting move?) so an affinity would not be unexpected. However, “Gringo,” directed by Nash Edgerton, strikes a tone of its own and sticks to it. As the movie grows more far-fetched it actually gets more predictable, in both plot twists and camera setups—you can actually see when Edgerton frames a shot so that a character can get “unexpectedly” slammed by a car. By this point the movie's accrued enough interest and goodwill that it’s not too trying. I was a little more irritated by a certain bit of withholding at the finale but the overall experience of “Gringo” is pretty tangy. 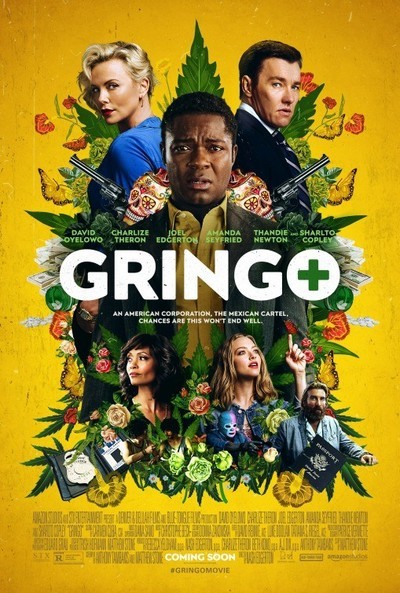 Rated R for language throughout, violence and sexual content.