It's a sign of progress that the great Isabelle Huppert can emerge from her acclaimed performance in "Elle" with enough industry clout to land a hambone villain role in a project that probably wouldn't exist if she hadn't said yes to it. "Greta," a thriller directed and co-written by Neil Jordan ("The Crying Game"), is a 2019 update on a popular sub-genre from a specific period in film history, the '80s and '90s. It was a time when multiplexes never lacked for preposterous thrillers about law-abiding people menaced by agents of chaos who had sympathetic backstories but were so cruel and frightening that the audience could cheer their deaths without guilt. "Fatal Attraction," "The Hand that Rocks the Cradle," "Unlawful Entry," Martin Scorsese's remake of "Cape Fear," "Basic Instinct," and other movies in this vein were godsends to skilled actors looking for a chance to cut loose and have naughty fun. From the looks of it, Huppert had a grand time playing the title character in "Greta," a film that could have been released in the era of MTV veejays and VCRs.

The story begins when young Frances McCullen (Chloë Grace Moretz), a single New Yorker who shares a stunning apartment with her rich pal Erika (Maika Monroe), finds a designer handbag on a subway car and returns it to its owner, Greta Hideg. Greta is a French-born piano teacher and recent widow who lives by herself in a gorgeous old house, playing Chopin and Beethoven. It just so happens that Frances recently lost her own mother. The women settle into a facsimile of a mother-daughter relationship (a dynamic that Jordan has explored in other films, notably "Byzantium"). Frances even helps Greta adopt a dog.

Of course this movie wouldn't be billed as a thriller were Greta a nice but lonely woman just looking for companionship. Sure enough, Frances figures out that Greta is a malevolent figure who has lured people into this kind of trap before—but by the time she's done the mental math, it's too late to save herself. Greta sinks her claws in deep. And Huppert gets the chance to cut loose and give the sort of impish, over-the-top, at times brazenly self-regarding performance that let Jack Nicholson buy himself extra houses.

In addition to being a sophisticated portrayer of unconventional relationships, Jordan is a genre buff. He debuted with a werewolf picture ("The Company of Wolves"), manages to work horror elements into non-horror films. He loves to stage jump scares, and film sensuous images of mangled flesh and spilled blood. "Greta" has plenty of that. But because all the characters save Greta are thinly drawn (including Frances, a distressed ingenue that not even Moretz can save), they might all feel a touch mechanical if Huppert weren't in there, pirouetting her way through the script. She's always looking for the odd detail that'll make a moment pop, like the absentminded, sing-song tone she takes as she tells Frances, "A woman is known by her shoes and her gloves, and we are nothing if not ladies!" or the way she literally dances as she's doling out violence, the camera dipping to floor-level to capture her footwork.

This is a ridiculous film, knowingly so. It's hard to say who winks at the audience more often, Jordan or Huppert. As in other movies in this vein, Greta absorbs physical punishment that would incapacitate a team of Clydesdales and keeps right on coming—but it's a lot of fun, especially at the end when the plot's noose tightens, drawing in supporting players (including a police detective played by longtime Jordan repertory company member Stephen Rea) and transforming Greta's home into a de facto haunted house, filled with secrets and traps. There's a moment near the climax where Jordan darts close to Huppert's face during a moment of extreme horror and you notice a smirk tugging at the corners of her face, paired with a slightly trembling lip. It's the expression of a woman who can barely contain her laughter. 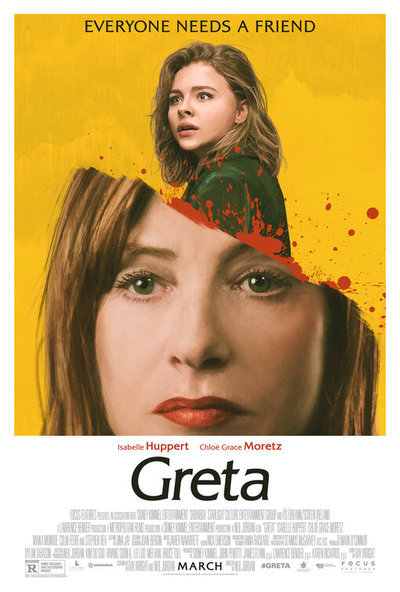 Rated R for some violence and disturbing images.