No story could be simpler. An old couple come to the city to visit their children and grandchildren. Their children are busy, and the old people upset their routines. In a quiet way, without anyone admitting it, the visit goes badly. The parents return home. A few days later, the grandmother dies. Now it is the turn of the children to make a journey.

From these few elements Yasujiro Ozu made one of the greatest films of all time. "Tokyo Story" (1953) lacks sentimental triggers and contrived emotion; it looks away from moments a lesser movie would have exploited. It doesn't want to force our emotions, but to share its understanding. It does this so well that I am near tears in the last 30 minutes. It ennobles the cinema. It says, yes, a movie can help us make small steps against our imperfections.

It does this with characters so universal that we recognize them instantly -- sometimes in the mirror. It was made 50 years ago in Japan, by a man who was born 100 years ago this year, and it is about our families, our natures, our flaws and our clumsy search for love and meaning. It isn't that our lives keep us too busy for our families. It's that we have arranged them to protect us from having to deal with big questions of love, work and death. We escape into truisms, small talk and distractions. Given the opportunity at a family gathering to share our hopes and disappointments, we talk about the weather and watch TV.

Ozu is not only a great director but a great teacher, and after you know his films, a friend. With no other director do I feel affection for every single shot. "Tokyo Story" opens with the distant putt-putt of a ship's engine, and bittersweet music evokes a radio heard long ago and far away. There are exterior shots of a neighborhood. If we know Ozu, we know the boat will not figure in the plot, that the music will never be used to underline or comment on the emotions, that the neighborhood may be the one where the story takes place, but it doesn't matter. Ozu uses "pillow shots" like the pillow words in Japanese poetry, separating his scenes with brief, evocative images from everyday life. He likes trains, clouds, smoke, clothes hanging on a line, empty streets, small architectural details, banners blowing in the wind (he painted most of the banners in his movies himself).

His visual strategy is as simple (therefore as profound) as possible. His camera is not always precisely three feet above the floor (the eye level of a Japanese person seated on a tatami mat), but it usually is. "The reason for the low camera position," the writer Donald Richie explains, "is that it eliminates depth and makes a two-dimensional space." So we are better able to appreciate a composition because Ozu lets us notice its lines and weights and tones -- which always reflect his exact feeling about the scene.

He almost never moves his camera (it moves once in "Tokyo Story," which is more than usual). Every single shot is intended to have a perfect composition of its own, even if that means there are continuity errors. All the shots are framed in some way. In the foreground of the interior shots, perhaps tucked in a corner, is a little teapot. Ozu loves that teapot. It's like the red signature stamp of a Japanese woodblock artist; it is his maker's mark.

If there is movement in an Ozu film, it comes from nature or people, not from the camera. He often shows a room before people enter, and lingers a second after they leave. If characters go upstairs, they are absent precisely long enough to actually do that. If a character is speaking, he shows the entire speech. No cutaways, no listening shots, no overlapping dialogue. He is comfortable with silences. Sometimes characters speak little and imply much; the old father in "Tokyo Story" often smiles and says "yes," and what he means is sometimes yes, sometimes no, sometimes deep regret, sometimes a decision to keep his thoughts to himself.

Does anyone go to a movie to watch the style? Well, yes. An elegantly refined style like Ozu's places people in the foreground; he focuses on the nuances of everyday life. His is the most humanistic of styles, removing the machinery of effects and editing and choosing to touch us with human feeling, not workshop storytelling technique.

Consider the Hirayama family in "Tokyo Story." Shukichi, the grandfather, is played by Chishu Ryu, one of Ozu's favorite actors; Tomi, the grandmother, is played by Chiyeko Higashiyama. She is overweight and plain-faced; he has a tall, fallen grace. There are no extravagant displays of affection between them. We learn that he drank too much as a young man, then stopped. There are hints that their marriage was imperfect, but endured.

Living at home with them is their youngest daughter Kyoko (Kyoko Kagawa), one of the many unmarried children in Ozu's films who live with their parents. (Ozu never married, and lived with his mother until she died.) Their youngest son Keizo (Shiro Osaka) works in Osaka, midway on their train journey. In Tokyo, their oldest son Koichi (So Yamamura) is a doctor in a neighborhood clinic -- not as distinguished as his parents imagined. He is married to Fumiko (Kuniko Miyake), and they have two sons. His sister Shige (Haruko Sugimura) is married and runs a beauty salon. A middle son was killed in World War II; their daughter-in-law Noriko (the great star Setsuko Hara) has never remarried and is an office worker living in Tokyo.

There is an extraordinary scene soon after the old parents arrive. "These are your grandparents," Fumiko tells her oldest son, Minoru. And then to her mother-in-law: "Minoru is in middle school now." So this is the first time he has met them, yet he escapes quickly to his room. Ozu's lifelong theme is the destruction of the Japanese family through work and modernization, and in only two lines of dialogue, he shows us how the generations have drifted apart.

The grown children mean well. They try to make time for their visitors. There is a moment of rich humor when we join them all on a tour bus, everyone bouncing and leaning in unison. But old folks spend most days "resting" at home because no one is free to take them anywhere. When Koichi brings home cakes for his parents, Fumiko says they're too expensive, and the old folks won't appreciate them; while discussing this, they eat the cakes. Oddly, the person who treats them most kindly and makes time for them is Noriko, the widow of their middle son.

The others feel bad that they can't spare more time for their parents and hit on a solution: They'll send them for a holiday to Atami Hot Springs. Shukichi and Tomi did not come to Tokyo to go to a spa, but they agree. At the spa, we see young people dancing and playing cards, and then, in one of those perfect Ozu shots, two pairs of shoes placed neatly side by side outside the old couple's door. The next morning, as they're sitting side by side on a sea wall, he says, "Let's go home."

People spend a lot of time sitting side by side in an Ozu film. Instead of over-the-shoulder compositions, he likes two or three characters all in a row. If this causes violations of the eyeline rules (sometimes they don't seem to be looking at one another when they speak), he doesn't care. Often he views them from behind. He composes this way, I think, so we can see them all at once, the listeners as well as the speakers.

The last night in Tokyo is made of two wonderful sequences. Tomi goes to stay with Noriko, and Shukichi says he will visit an old friend from the village. Tomi and Noriko have a warm and loving conversation (the old woman tells her son's widow she should remarry), and Shukichi gets plastered with two former village friends. As they drink, they complain about their lives and children, and we see how alcohol helps them break through the resolutely positive Japanese public face.

All through the movie, Tomi and Shukichi discuss their disappointment in such guarded words, punctuated with so many nods and agreements, that their real feelings are hidden in code. Notice how they criticize their grandchildren by saying they prefer their children. Listen how they agree their children are "better than average."

The old people go home, the mother dies, and the family assembles for the funeral -- at last all lined up together in one row for Ozu's camera. Now there are real tears, even from those who resented the visit. Chishu Ryu, that wonderful actor, is masterful in the way he buries the old man's grief in nods, agreement, pleasantries and routine. When the old woman next door stops by to express her sympathy, he makes what for him is an outpouring of grief: "Oh, she was a headstrong woman ... but if I knew things would come to this, I'd have been kinder to her." A pause. "Living alone like this, the days will get very long." 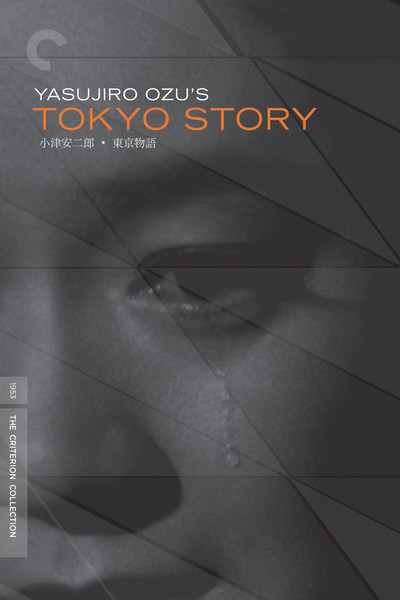