After he completed "Red" (1994), the final film in his "Three Colors" trilogy, Krzysztof Kieslowski announced that he would retire. This was not a man weary of work. It was the retirement of a magician, a Prospero who was now content to lay aside his art--"to read and smoke." When he died two years later, he was only 56.

Because he made most of his early work in Poland during the Cold War, and because his masterpiece "The Decalogue" consists of 10 one-hour films that do not fit easily on the multiplex conveyor belt, he has still not received the kind of recognition given those he deserves to be named with, like Bergman, Ozu, Fellini, Keaton and Bunuel. He is one of the filmmakers I would turn to for consolation if I learned I was dying, or to laugh with on finding I would live after all.

He often deals with illness, loss and death, but deep pools of humor float beneath the surfaces of his films. There is a sequence in "White" (1994) where his hero, a Polish hairdresser, is so desperately homesick in Paris that he arranges to be sent back to Warsaw, curled up inside a suitcase. His friend at the other end watches the airport conveyor belt with horror: The bag is not there, it has been stolen by thieves who break the lock, find only the little man, beat him savagely and throw him on a rubbish heap. Staggering to his feet, he looks around, bloody but triumphant, and cries out, "Home at last!"

In "Blue" (1993), Juliette Binoche plays a young woman whose husband and child are killed in a car crash. After a period of emotional paralysis, she telephones an old friend who has always been in love with her, and tells him his chance has come around at last. They have sex. She wants to see if it will help. It does not. She moves to an obscure street in an anonymous corner of Paris, determined to see no one she knows and make no new friends. But as chance would have it, she does meet someone: She meets her husband's mistress.

"Red" (1994), the best film among equals, stars Irene Jacob as Valentine, a woman in Geneva whose car strikes a beautiful golden retriever. She nurses the dog back to health and returns it to its owner, a retired judge (Jean-Louis Trintignant), who tells her she can keep it. He is beyond worrying about dogs. He occupies his days intercepting the telephone calls of his neighbors, and he watches them through his windows almost like God--actually, just like God--curious, since they have free will, what they will do next. After a lifetime of passing verdicts, he wants to be a detached observer.

As a young man this judge was was once in love, lost that love, and has lived on hold ever since. He all but caresses his emotional wounds. Although at first he rudely turns Valentine away, slowly he begins to tell her his story. There is a moment in "Red" where Valentine leans forward to listen with such attention and sympathy that she seems at prayer. Only gradually do we learn that the story of the judge and his lost love reveals parallels with the story of Valentine and her lover who is always absent, and with the life of a young law student who lives across from her apartment in the city--a student she has never met.

On another timeline, in a parallel universe, the judge and Valentine might have themselves fallen in love. They missed being the same age by only 40 years or so. Now that Hubble has seen back to the dawn of time, that doesn't seem a great many years. There is a passage in one of Loren Eiseley's books where he climbs down a crevice in the desert and finds himself looking at the skull of one of man's early descendants, who gazes back at him over countless centuries. He reflects that from a cosmological perspective, they lived at almost the same instant.

"The Decalogue" and the trilogy were written in collaboration with Krzysztof Piesiewicz, a lawyer Kieslowski met during the Solidarity trials. "He didn't know how to write," the director remembered, "but he could talk." Shut up in a smoke-filled room, they talked through the films together. Although he always wrote with Piesiewicz, curiously Kieslowski usually used a different cinematographer for every film; he didn't want them to look as if they matched. One imagines Piesiewicz as the advocate for contrarian views, since the films so consistently resist delivering in the expected way.

In the trilogy, "Blue" is the anti-tragedy, "White" is the anti-comedy, and "Red" is the anti-romance. All three films hook us with immediate narrative interest. They are metaphysical through example, not theory: Kieslowski tells the parable but doesn't preach the lesson. It's the same with his "Decalogue," where each film is based on one of the Ten Commandments, but it is not always possible to say which commandment, or precisely what the film is saying about it. I know this because I taught "The Decalogue" in a film class, where we discovered that the order of the commandments differs slightly in the Jewish, Catholic and Protestant versions. "And in the Kieslowski version," a student sighed.

In the same elusive way, using symbolism that only seems to be helpful, "Blue," "White" and "Red" stand for the three colors of the French tricolor, representing liberty, equality and fraternity. Juliette Binoche, in "Blue," has the liberty, after her loss of husband and child, to start life again, or not at all. Zbigniew Zamachowski, in "White," is dropped by his beautiful wife (Julie Delpy) after he goes to a great deal of trouble to move her to Paris. Back home in Poland, he wants to make millions so that he can be her equal, and have his revenge. Valentine and the old judge in "Red" have a fraternity of souls that springs across barriers of time and gender because they both have the imagination to appreciate what could have been.

There is also, lurking unsaid, the possibility that this Prospero, so intent on studying the lives of his neighbors without involving himself, might be the catalyst for one final act of magic involving Valentine and that young man who lives across from her. That young man who might have been him, or, this being Kieslowski, might actually be him, his timelines overlapping slightly and specific details of course altered by circumstances.

The Columbia University professor and film critic Annette Insdorf, who knew Kieslowski well and often translated for him, says, "It's rare that you say about some film director, 'What a good man.' But he was. Very by-the-way, emotional, very non-sentimental, dry in his wit and in his bearing, but he really made an impression." Her book, Double Lives, Second Chances: The Cinema of Krzysztof Kieslowski, provides the key to his work in its title. Kieslowski almost never made a film about characters who lacked choices. Indeed, his films were usually about their choices, how they arrived at them, and the close connections they made or missed.

Most films make the unspoken assumption that their characters are defined by and limited to their plots. But lives are not about stories.

Stories are about lives. That is the difference between films for children and films for adults. Kieslowski celebrates intersecting timelines and lifelines, choices made and unmade. All his films ask why, since God gave us free will, movie directors go to such trouble to take it away.

There is a moment in "The Double Life of Veronique" (1991), where if the heroine had only glanced out a bus window a second sooner, she might have glimpsed herself in the city square. How could that be? A moment's rent in the fabric of time? A flash from a parallel universe? Kieslowski would never have dreamed of saying and probably didn't know.

"Kieslowski truly loved his characters and invites us into a poignant awareness of both our limitations and our capacity for transcendence," Insdorf says, and you can feel that in the tenderness of every frame. The old judge in "Red" is harsh and dismissive, but with the sense that it hurts him, not entertains him, to treat Valentine so harshly. We see him like so many of Kieslowski's characters, swimming upward through a suffocating life toward the possibility that hope still floats somewhere above.

I connect strongly with Kieslowski because I sometimes seek a whiff of transcendence by revisiting places from earlier years. I am thinking now of a cafe in Venice, a low cliff overlooking the sea near Donegal, a bookstore in Cape Town and Sir John Soane's breakfast room in London. I am drawn to them in the spirit of pilgrimage. No one else can see the shadows of my former and future visits there, or know how they are the touchstones of my mortality, but if some day as I approach the cafe, I see myself just getting up to leave, I will not be surprised to have missed myself by so little.

Kieslowski would have understood. A link between all three films in the trilogy is provided by a brief shot of an old lady trying to deposit a bottle in a street trash-recycling bin. The slot is a little too high for her to reach. In "Red," Valentine tries to help her. The first two movies are set in Paris. What is the old lady doing in Geneva? Exactly. 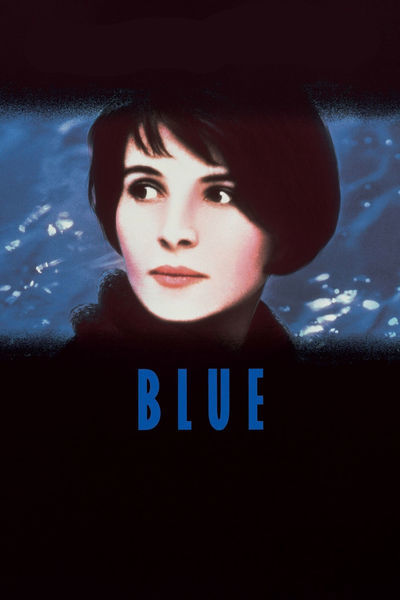