Heil, heil, the drang's all here!

In 1938, the world's most famous movie star began to prepare a film about the monster of the 20th century. Charlie Chaplin looked a little like Adolf Hitler, in part because Hitler had chosen the same toothbrush moustache as the Little Tramp. Exploiting that resemblance, Chaplin devised a satire in which the dictator and a Jewish barber from the ghetto would be mistaken for each other. The result, released in 1940, was "The Great Dictator," Chaplin's first talking picture and the highest-grossing of his career, although it would cause him great difficulties and indirectly lead to his long exile from the United States.

In 1938, Hitler was not yet recognized in all quarters as the embodiment of evil. Powerful isolationist forces in America preached a policy of nonintervention in the troubles of Europe, and rumors of Hitler's policy to exterminate the Jews were welcomed by anti-Semitic groups. Some of Hitler's earliest opponents, including anti-Franco American volunteers in the Spanish Civil War, were later seen as "premature antifascists"; by fighting against fascism when Hitler was still considered an ally, they raised suspicion that they might be communists. "The Great Dictator" ended with a long speech denouncing dictatorships, and extolling democracy and individual freedoms. This sounded to the left like bedrock American values, but to some on the right, it sounded pinko.

If Chaplin had not been "premature," however, it is unlikely he would have made the film at all. Once the horrors of the Holocaust began to be known, Hitler was no longer funny, not at all. The Marx Brothers, ahead of the curve, made "Duck Soup" in 1933, with Groucho playing the dictator Rufus T. Firefly in a comedy that had ominous undertones about what was already under way in Europe. And as late as 1942, the German exile Ernst Lubitsch made "To Be or Not to Be," with Jack Benny as an actor who becomes embroiled in the Nazi occupation of Poland.

Chaplin's film, aimed obviously and scornfully at Hitler himself, could only have been funny, he says in his autobiography, if he had not yet known the full extent of the Nazi evil. As it was, the film's mockery of Hitler got it banned in Spain, Italy and neutral Ireland. But in America and elsewhere, it played with an impact that, today, may be hard to imagine. There had never been any fictional character as universally beloved as the Little Tramp, and although Chaplin was technically not playing the Tramp in "The Great Dictator," he looked just like him, this time not in a comic fable but a political satire.

The plot is one of those concoctions that makes the action barely possible. The hero, a barber-soldier in World War I, saves the life of a German pilot named Schultz and flies him to safety, all the time not even knowing he was the enemy. Their crash-landing gives the barber amnesia, and for 20 years he doesn't know who he is. Then he recovers and returns to his barber shop in the country of Tomania (say it aloud), only to discover that the dictator Hynkel has come to power, not under the swastika, but under the Double Cross. His storm troopers are moving through the ghetto, smashing windows and rounding up Jews (the term "concentration camp" is used early, matter-of-factly). But the barber's shop is spared by the intervention of Schultz, now an assistant minister, who recognizes him.

The barber (never named, just like the Tramp) is in love with the maid Hannah (Paulette Goddard, Chaplin's estranged wife at the time). And he is befriended by his former neighbors. But he and the disloyal Schultz are eventually put in a concentration camp, and then Hynkel has a boating mishap, is mistaken for the barber, and locked into the camp just as the barber and Schultz escape -- with Hynkel's uniform. Now the barber is assumed by everyone to be the dictator.

In the classic Chaplin tradition, the movie has a richness of gags and comic pantomime, including Hynkel's famous ballet with an inflated balloon that makes the globe his plaything. There is a sequence where five men bite into puddings after being told the one who finds a coin must give his life to assassinate Hynkel. None of them want to find the coin and there is cheating, but eventually -- see for yourself. And there is a long, funny episode when the dictator of neighboring Bacteria, Benzini Napaloni (Jack Oakie), pays a state visit. Napaloni, obviously modeled on Mussolini, eludes an attempt to make him sit in a low chair so the short Hynkel can loom over him. And when the two of them sit in adjacent barber chairs, they take turns pumping their chairs higher than the other. There is also a lot of confusion about saluting, and Chaplin intercuts shots of the two dictators with newsreels of enormous, cheering crowds.

In 1940, this would have played as very highly charged, because Chaplin was launching his comic persona against Hitler in an attempt, largely successful, to ridicule him as a clown. Audiences reacted strongly to the film's humor; it won five Oscar nominations, for picture, actor, supporting actor (Oakie), screenplay and music (Meredith Willson). But audiences at the time, and ever since, have felt that the film comes to a dead end when the barber, impersonating Hynkel, delivers a monologue of more than three minutes which represents Chaplin's own views.

Incredibly, no one tries to stop the fake "Hynkel." Chaplin talks straight into the camera, in his own voice, with no comic touches and only three cutaways, as the barber is presumably heard on radio all over the world. What he says is true enough, but it deflates the comedy and ends the picture as a lecture, followed by a shot of Goddard outlined against the sky, joyously facing the Hynkel-free future, as the music swells. It didn't work then, and it doesn't work now. It is fatal when Chaplin drops his comic persona, abruptly changes the tone of the film, and leaves us wondering how long he is going to talk (a question that should never arise during a comedy). The movie plays like a comedy followed by an editorial.

Chaplin (1889-1977) nevertheless was determined to keep the speech; it might have been his reason for making the film. He put the Little Tramp and $1.5 million of his own money on the line to ridicule Hitler (and was instrumental in directing more millions to Jewish refugee centers). He made his statement, it found a large audience, and in the stretches leading up to the final speech, he shows his innate comic genius. It is a funny film, which we expect from Chaplin, and a brave one. He never played a little man with a mustache again.

And now a memory. In 1972, the Venice Film Festival staged a retrospective of Chaplin's complete work, with prints from his own collection. On the closing night, his masterpiece, "City Lights" (1932), was shown outdoors in Piazza San Marco. The lights were off, the orchestras were silenced for the first time in more than a century, and the film played on a giant screen to standing room only.

When it was over, and the blind flower girl could see again, and she realized the Little Tramp was her savior, there was much snuffling and blowing of noses. Then a single spotlight sprung from the darkness and illuminated a balcony overlooking the square. A little man stepped out and waved. And we cheered and cheered. 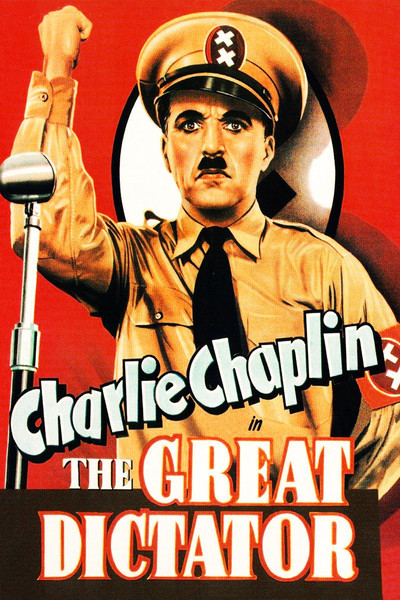