Louise Brooks regards us from the screen as if the screen were not there; she casts away the artifice of film and invites us to play with her. Her beauty was “almost impersonal,” Pauline Kael wrote; she carries it like a gift she doesn't think much about, and confronts us as a naughty girl. When you meet someone like this in life, you're attracted, but you know in your gut she'll be nothing but trouble.

Life cannot permit such freedom, and so Brooks, in her best films, is ground down--punished for her joy. At the end of “Pandora's Box” (1928), she's killed while in the embrace of Jack the Ripper, and the audience isn't even asked to accept her death as punishment for her wicked ways. It's more a settling of scores: Anyone who looks that great, and lives life on her own terms, has to be swatted down by fate or the rest of us will grow discouraged.

“Louise Brooks was way too wild in a business that was way too tame.” So says Dr. Paolo Cherchi Usai, curator of the film collection at Eastman House in Rochester, N.Y. We see him in “Looking for Lulu,” an hourlong documentary, narrated by Shirley MacLaine, that Turner Classic Movies will air May 5, part of its monthlong tribute to Brooks. The cable channel will also show “Pandora's Box,” “The Show-Off” (1926) and “God's Gift to Women” (1935). If you can believe Steve Silberman's article in Wired magazine, there is a Brooks revival sweeping the country; she is the most popular dead actress on the Web, and so on. Popularity comes and goes. Brooks remains, because of her luck in making two great films in Germany right at the end of the silent era, after she had burned all her bridges in Hollywood.

These films are “Pandora's Box” and “Diary of a Lost Girl,” both directed by the master of psycho-sexual melodrama, G.W. Pabst. Now restored and available on video, they glisten with the purity of black and white, and Brooks' face is fixed forever: the bangs cut low over the eyes (“One of the 10 haircuts that changed the world,” according to InStyle magazine); the eyebrows rich and level, parallel to the bangs; the deep dark eyes; the mouth often caught in a pout or a tease; the porcelain skin; the perfect regularity of features that made her almost a cartoon (she inspired the comic strip “Dixie Dugan”).

She is thin but not skinny, a flapper. Her lovers included Charles Chaplin, CBS president William Paley (who gave her a lifetime stipend), and many others--including the clients of an escort agency she worked for in New York in the 1940s, after all of her rich and famous friends had forgotten her. She was “too wild” (thrown out of the Algonquin Hotel at 18 for “promiscuity”), but there was another problem; she drank too much. When she drank she did things like telling Paramount to go to hell when they asked her to come back to Hollywood and dub dialogue into her last silent film.

Her life was as harrowing as Frances Farmer's, but it had a happier ending. After the early fame (she danced with Martha Graham at 16), the Hollywood stardom, the German films, and the slow decline (she lusted after John Wayne in that B western they made together), there came the lost years of drinking and “escorting,” and then--well, it happened that her New York apartment was across the hall from John Springer's, and he was a publicist. When James Card, then the film curator at Eastman House, asked Springer where Brooks could be found, Springer knocked on her door.

Brooks visited Rochester to look at her old films, and was invited to stay. Card fell in love with her, although the nature of their relationship is unclear. He took her to Paris for a retrospective at the Cinematheque Francais, where rumpled old Henri Langlois declared, “There is no Garbo! There is no Dietrich! There is only Louise Brooks!” Brooks must have smiled to hear her name linked with two of her reputed lovers.

In Rochester, she wrote memoirs that were eventually collected into Lulu in Hollywood, one of the few film books that can be called indispensable. She remembered Bogart as a kid starting out on the New York stage, and the private lovability of her old friend, W.C. Fields. And she was frank about her rise and especially her fall. Many silent stars become boring relics, repeating the same memorized anecdotes. Louise Brooks was saved by the astringent power of her wit.

The other night I looked again at “Pandora's Box,” which was offered to her by Pabst just as Hollywood dumped her. Would it be a great film without her presence and her closeups? Maybe not. The plot, which could be remade today, involves a young woman named Lulu who says she is not a prostitute, while we notice that she behaves an awfully lot like one. She's entertaining the meter-reader as the film begins, and then welcomes Schigolch (Carl Goetz), a seedy old man who may be her father, her pimp, or both. He wants her to meet an acrobat who wants her for a trapeze act, but first she gets a visit from her lover and patron, Schon (Fritz Kortner), a newspaper publisher.

Those who love Lulu tend to die violently and unexpectedly. The look on her face during the accidental shooting of one character is fascinating: She seems to be standing outside her own life, watching it happen. There is an episode on a gambling ship where a disreputable Marquis attempts to sell her to an Egyptian pimp on the grounds that since she can't return to Germany anyway, she might as well make the best of a bad situation. There is a flight by rowboat, and then Jack the Ripper materializes from the London fog.

At this late stage in the movie we are asked to believe that Lulu, freezing and starving and concerned for her old pimp (or father), has decided to commit her first act of sex for cash. When Jack the Ripper explains that he has no money, however, she likes his looks enough to invite him upstairs anyway. Not a good judge of character.

This synopsis could apply equally to a great or a laughable film. Brooks makes it a great one. She seems to stand outside “Pandora's Box.” She looks modern: She doesn't have the dated makeup of many silent stars, but could be a Demi Moore or Winona Ryder, electronically inserted into old scenes by computer. As she careens from one man to another, the only constant factor is her will: She wants to party, she wants to make love, she wants to drink, she wants to tell men what she wants, and she wants to get it. There is no other motive than her desire: Not money, not sex, just selfishness. It could get ugly, but she makes it look like fun. You can't get something for nothing, but if you can put off paying the bill long enough, it may begin to feel like you can. 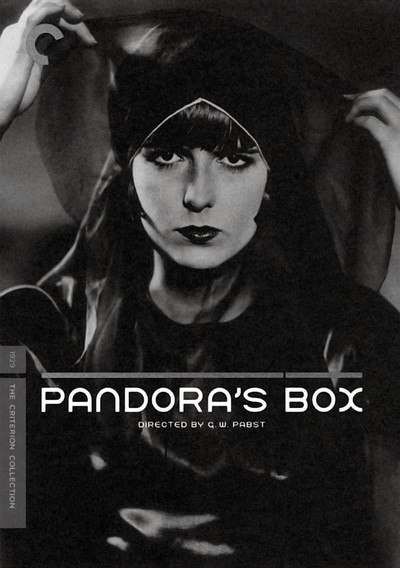