A movie like "Good Luck to You, Leo Grande," a two-hander taking place mostly in a single location, only works if the two actors are charming. Charm is a quality very difficult to define, or even describe, but you know it when you see it. Charm can't be pushed. Neither can chemistry. Without these hard-to-grasp yet essential qualities, "Good Luck to You, Leo Grande," about an uptight woman who hires a younger male sex worker, would have been a so-called sex-comedy, filled with pushed and inauthentic hi-jinx. Considering these factors, "Good Luck to You, Leo Grande" is extremely risky. Everything depends on the feel of the moment, the way the actors look at each other, or listen, or react. Directed by Sophie Hyde, with a script by Katy Brand, these risks more than pay off, and often in very unexpected ways.

Emma Thompson plays Nancy, retired and recently widowed, vividly unhappy, and at the limit of her ability to endure her own unhappiness. Completely breaking her strict patterns, she hires a sex worker named Leo (Daryl McCormack), whom she somehow found on the internet. She rents a posh hotel room, where he joins her. The film is broken up into four separate "meetings," and each meeting has its own flow and rhythm, with jagged edges, reprieves and pauses, beautiful and funny moments, as these strangers get to know each other in what is a transparently transactional relationship. Things don't happen in a linear way: emotions rarely do. Sex sure doesn't, especially not with someone as terrified as Nancy.

Leo is kind and open, funny and confident. Nancy is a mess, whip-sawing from self-hatred to over-sharing to near-hysteria to business-like statements, flung at him like a weapon. There are times when a totally inappropriate motherly vibe comes out of her, and she worries he's being trafficked, or that he feels demeaned by being there, or grossed out by her body. Leo meets her wherever she's at. It's part of his job, and he's very good at his job. Leo does not judge. Nancy tells him straight out that she's never had an orgasm, nor does she expect to, so he shouldn't even try. Leo doesn't push it, or reassure her that he'll make her come, no problem. Instead, he asks her questions about her experiences. She's probably never said any of it out loud before, and the words tumble out of her mouth.

What happens between them is, of course, sexual, but so much else is going on. Fascinating philosophical territory opens up, where things like intimacy, aging, and the importance of sexual pleasure, whether it's with yourself or with someone else, enter the room. There is a moment early on where Thompson, always amazing but at her best here, begins to weep. For her, sex is associated with disappointment and loss. She isn't going to untangle that in a two-hour session. It's not like Leo touches her and she melts instantly. Nancy thought she hired Leo to have some sex. She didn't realize the focus would be on pleasure, whatever form that pleasure takes. She has no idea what pleasure even means.

The structure of "Good Luck to You, Leo Grande" is simple, almost like a stage play, but the execution clearly took meticulous care. The hotel room is shot by cinematographer Bryan Mason as though it's a vast space with different rooms: sitting on the couch has a totally different feel than sitting on the bed, even though the areas are just three feet apart. There's nothing fussy or overdone in the film's look, nothing to distract. Human interaction is the main event here. McCormack is extraordinary as Leo, approaching the character with no condescension. He easily handles the more troubled aspects of Leo's life, the flickers of unease when Nancy starts pressing to know more about his "real life." Leo is not a cipher or a symbol. This is a testament to the script, but also to McCormack's performance.

It's a relief to see a film so frank about sex, and so open to sex's complexities, especially when so much of current cinema is sexless to a disheartening degree. "Leo Grande" cares about sex for older women, and not just sex, but the baggage associated with sex, and how that baggage robs us of joy and fulfillment. Also revelatory is the film's non-judgmental attitude towards sex work. I thought often of the haunting moment in "American Gigolo" when Julian (Richard Gere) leans against the wall, naked, and opens up about what he does and why:

"The other night, that night I met you at the hotel, I was with a woman. Somebody's mother. Her husband didn't care about her any more. This woman hadn't had an orgasm in maybe 10 years. It took me three hours to get her off. For a while there, I didn't think I was gonna be able to do it. When it was over, I felt like I'd done something, something worthwhile. Who else would've taken the time or cared enough to do it right?"

Julian's monologue is not just about pleasure. He leads with the woman's pain. Sex isn't just sex. It's healing and cathartic and just plain old fun, fun with no object other than it's fun to have fun. These are tough topics. "Leo Grande" has a light touch, and the dialogue is often hilarious, but depth is never sacrificed. There is a moment when Emma Thompson stares at her naked body in the mirror, probably for the first time. Physical nakedness is one thing. Emotional nakedness is another. "Good Luck to You, Leo Grande" has room for both. 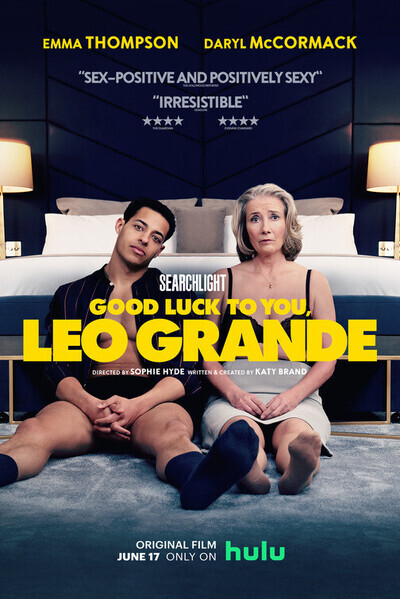