God's Not Dead: A Light in Darkness

Written and directed by Michael Mason, "God's Not Dead: A Light in Darkness" is the third installment in the "God's Not Dead" franchise, and it features all of the familiar elements from the two previous films: a persecution-complex, an "us vs. them" attitude, and visions of the brave faithful going up against a hostile secular society. It's a near impenetrable "world view," so impenetrable in the earlier films they were barely films at all. They were straight-up political propaganda. "A Light in Darkness" is political propaganda too (Dana Loesch has a cameo, after all). However, it has a slightly more complex story, and actually interrogates some of the assumptions behind the stifling Christian persecution complex. A lot of grappling happens. The community grapples. The characters grapple. People grapple alone, people grapple together. Grappling is more interesting to watch than certainty, any day of the week.

David A.R. White reprises his role from the two former films, that of Pastor Dave, and this time Pastor Dave takes center stage. He preaches in St. James, a beautiful old church on the grounds of a small public university. Also returning is Dave's co-pastor and best friend Reverend Jude, played by Benjamin A. Onyango. The Board of Trustees at the university (headed by Tatum O'Neal, in a glorified cameo) wants to expropriate the church land to build a student union. But the issue goes deeper than that. St. James and Pastor Dave have been embroiled in controversy, with student protest groups clustered outside of the church day and night. What exactly is so controversial about the church is never explained. The opening scene shows Dave being taken to jail for refusing to hand over the transcripts of his sermons to a judge. Why were his sermons subpoenaed? Perhaps in the "world view" of "God's Not Dead" secular people just have it in for Christians and that’s that. But it's pretty important to know why these sermons have made national news. Dave, as played by White, is unassuming in his faith, and has a quiet belief in the value the church adds to the community in its outreach programs. So what's the deal? Is he preaching anti-LGBTQ stuff? Anti-evolution tirades? "A Light in Darkness" doesn't say, and it should.

Then one night, someone throws a brick through the window of the church, starting a fire, and Jude—who ran into the church to investigate—is killed. Dave barely has time to process his grief before he is blindsided by a settlement offer from the university, presented to him by the Chancellor, Thomas Ellsworth (Ted McGinley). Dave decides to fight it, and makes a call to his long-lost brother Pearce (so long-lost he wasn't even mentioned in the other two movies), who also happens to be a lawyer working on "social justice" cases. (There's a dog whistle for you.) Pearce is played by John Corbett, and he brings life, humor and intelligence into his scenes.

White is an okay actor. When he tried to play a broad "character" part in "Faith of Our Fathers" it was embarrassing. But going toe to toe with John Corbett grounds him and keeps him from romanticizing his character (and the film does enough romanticizing of Dave as it is). The brothers debate their childhood, debate religion (Pearce is now a skeptic), all as they try to put together an eminent domain case. Their scenes together have real sparks, and Corbett swaggers through it all with an insouciant confidence, as he bats back Dave's certainties with pointed rational questions. Pearce calls out his brother—and calls out the film, really—when he says, "You guys love to play the victim card. I'm not engaging in a false narrative with you." The other two films painted the adversaries of the faithful as lost souls drenched in godless selfishness. Pearce is not painted that way at all. He's human. When he questioned his faith as a kid, the family—including Dave—rejected him. He is rightfully furious about that.

There's a subplot involving a young student named Keaton (Samantha Boscarino), who can't feel God's presence anymore. She's lost. Her boyfriend Adam (Mike C. Manning) teases her about her faith, assuming that eventually she will come over to the "other side." She breaks up with him (it's a well-written and well-played scene. There are quite a few of those.) Surprisingly, the script eventually gives Adam a backstory which explains—and respects—his position. His anger at the church comes from a very valid place. In the meantime, though, he grapples mightily. Nobody has time for homework at this college with all the grappling going on.

If you aren't an Evangelical Christian enmeshed in the political strain of American Christianity, these films can come off as irrational fever-dreams. (If you look at my name, it's not too difficult to figure out my own religious upbringing. I come from a family of very religious people, including a couple of Benedictine nuns. I go to mass still.) But the "God's Not Dead" films are not geared towards Catholics. They speak to Evangelical Protestants who believe there is a war on Christmas (even though stores across the land start playing Christmas carols on November 1st), who share Internet memes showing a misty-haloed Jesus embracing Trump in the Oval Office. There's a reason these films are hits.

Film critic Alissa Wilkinson wrote an essay titled "I'm a Christian and I hate Christian movies" where she said, "The glaring problem with 'God’s Not Dead', and most other films made for and marketed at the 'faith audience,' is that instead of exercising and challenging the imagination of their audience in ways that would make their audience better Christians, they shut down imagination and whisper sweet nothings into their ears instead."

"A Light in Darkness" does not "challenge the imagination." And Dana Loesch showing up on a talk show to discuss the case, whining contemptuously, "All of these universities go on and on and on about tolerance and inclusivity ... " is where the film shows its cards. Resentful grievance is the name of the game. But in one scene where Dave complains to a fellow pastor (an African-American) about how persecuted he feels, this pastor sets him straight in extremely sharp terms: "Brother, who do you think you're talking to? I am a black man in the deep South. Don't talk to me about your persecution." It's a good moment. The film has a lot of them. There's breathing room for grappling. 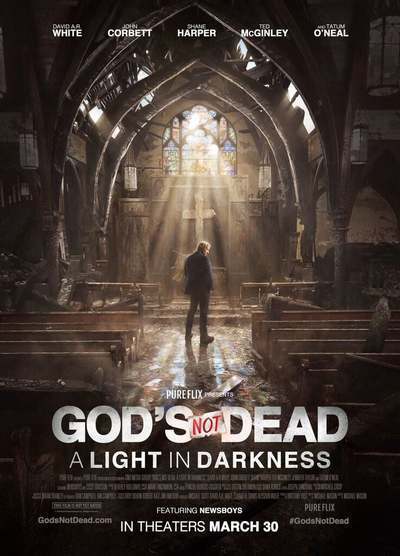 Rated PG for thematic elements including some violence and suggestive material.