The best bits in “Glass Onion: A Knives Out Mystery” are the ones you won’t read about in this review (and hopefully won’t hear about before you see the movie). But rest assured that they are plentiful, and they’re scattered generously throughout Rian Johnson’s uproarious if slightly inferior sequel.

The clever details, amusing name-drops, and precisely pointed digs at vapid celebrity culture keep Johnson’s movie zippy when it threatens to drag. In following up his 2019 smash hit “Knives Out,” the writer/director has expanded his storytelling scope in every way. Everything is bigger, flashier, and twistier. The running time is longer, as is the time frame the narrative covers. But that doesn’t necessarily make “Glass Onion” better. A wildly entertaining beginning gives way to a saggy midsection, as Johnson’s mystery doubles back on itself to reveal more details about these characters we thought we’d come to know. The result feels repetitive. The percolating tension that existed within the classy confines of the first “Knives Out” has lessened here against the sprawling, sun-dappled splendor of an over-the-top, private Greek island.

And it would just be tough for Johnson to top his original film, which was so smart and singular—hilarious, but also legitimately suspenseful. His characters felt richer (no pun intended) the first time around, and his ensemble cast had more to do across the board. “Glass Onion” offers some meaty and meaningful performances, particularly from Janelle Monáe, Kate Hudson, and Daniel Craig, once again doing his best Foghorn Leghorn impression as the intrepid detective Benoit Blanc. And several of his high-profile cameos are a giddy delight. But multitalented actors capable of daring, exciting work, such as Leslie Odom Jr. and Kathryn Hahn, frustratingly go to waste in underdeveloped supporting parts.

Still, if you can catch “Glass Onion” in its one-week theatrical run before it streams on Netflix starting December 23, it’s a film that benefits from the collective energy of an enthusiastic audience. Plus, it’ll help you avoid any spoilers that might dribble out over the next month. So: here goes!

Edward Norton plays Miles Bron, a billionaire tech bro who isn’t nearly as brilliant as he thinks. Once a year, he amasses his tight-knit clique—a disparate group of people who smugly refer to themselves as “The Disruptors”—for a lavish, weekend vacation. This time, he’s shipped them all multilayered puzzle boxes (an early indicator of the kind of elaborate production design Rick Heinrichs has in store for us) as a tease for the murder mystery he’s planned at his isolated getaway. His mansion manages to be gaudy yet chicly minimalist at once, an indication that he has no recognizable personal style of his own.

His guests include Hudson’s model-turned-influencer Birdie, who keeps getting into trouble for tweets she doesn’t realize are racist; Hahn’s married mom and no-nonsense politician Claire; Dave Bautista’s brash men’s-rights YouTuber Duke Cody and his scantily clad girlfriend, Whiskey (Madelyn Cline, finding surprising shading); and Odom’s beleaguered scientist, Lionel, who endures urgent faxes from Miles at all hours of the day and night. Also receiving an unexpected invitation is the jovial and fashionable Benoit Blanc, who welcomes the fun of this challenge, as he seems at sea between cases. Once again, it’s truly a joy to watch Craig get goofy.

Their reunion is all warm smiles and hugs until Monáe’s Andi Brand shows up. She was Miles’ partner in building his business empire; now, she’s on the outs with everyone. Her arrival sends an instant charge through the group and sends Blanc’s antennae buzzing. It’s a promising setup.

But as the title (taken from the Beatles song) suggests, there are layers upon layers to unpeel, yet the truth at the center is also crystal clear. As an indictment of the way extreme wealth corrupts, this whole exercise is pretty obvious, and it fits securely within a series of recent satires (“Triangle of Sadness,” “The Menu”) that aim at some easy targets, albeit with copious wit and style.

Monáe’s spectacular performance gives us something substantial to hold onto in this transactional world. The celebrity cameos are a consistent hoot, but Monáe—especially in her interactions with Craig—provides the necessary emotional heft and deeper meaning. Hudson’s performance is also more complex than we might initially expect. She combines an infectious ditziness reminiscent of her glorious mother, Goldie Hawn, with the kind of depth and vulnerability she displayed in her Oscar-nominated supporting work in “Almost Famous.” It’s an enjoyable change of pace to see the normally likable Bautista play such an obnoxious figure. And Craig offers slightly different versions of Blanc, depending on the situation; his technical precision is impressive, as always.

Trying to outsmart this deliriously complicated plot is part of the fun, too, but it also becomes an unwieldy process in time. Still, “Glass Onion” remains dazzling to watch, from the shimmering images from Johnson’s usual cinematographer Steve Yedlin to the truly inspired costume design by Jenny Eagan. One particular outfit Norton wears in a crucial flashback scene provides one of the movie’s biggest laughs.

Ultimately, though, the giant glass onion that rests atop Miles’ mansion becomes an all-too-apt metaphor for the movie as a whole: Sparkling, but empty.

Now playing in theaters for a one-week sneak preview and available on Netflix on December 23rd. 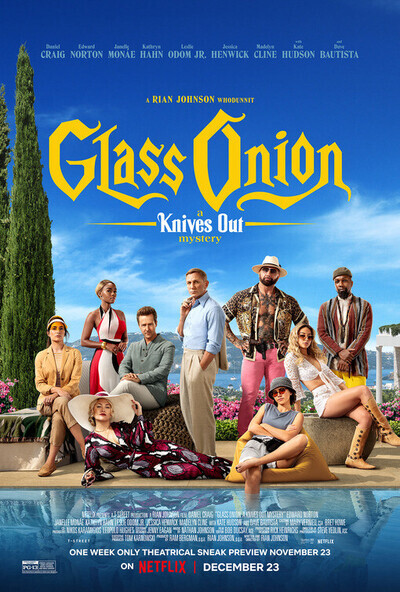