Girl with No Mouth

The Turkish post-apocalyptic children’s adventure “Girl With No Mouth” is a survivors’ tale about the vital importance of storytelling; it begins with an ungenerous written preface about “The Great War” and an “an explosion at ‘The Corporation.’” A young girl named Perihan—which they translate with the definition of “Peri,” or “fairy” in Turkish—wanders around an unnamed forest “in a small town in the North.” She’s listening to Delibes’ “The Flower Duet" from Lakmé, which suggests that something violent is about to happen since popular opera arias are now often used as sentimental short-hand for your dad’s about to die.

Sure enough, Perihan’s father (Sermet Yesil) is murdered a few minutes later by his intolerant Corporate stooge brother Kemal (Mehmet Yilmaz Ak), who claims that he’s the real victim since the Corporation “will hang me” if he doesn’t turn in Perihan, a girl with a puckered scar where her mouth should be. Kemal spends the rest of the movie chasing after Perihan and a group of similarly scarred children (one blind, one nose-less, etc.), but his free-floating anxiety about Corporate retaliation never pays off in this wet noodle of a fairy tale.

Instead, “Girl With No Mouth” is the sort of half-baked postmodern fantasy where child actors meander around a few dilapidated interiors and sunny exteriors, and only talk vaguely about their character-defining traumas. Perihan finds a new adopted family when she bounds into the young self-decorated Captain (Denizhan Akbaba) and his gang of misfit pre-teens, all of whom are fleeing “the hunters.” But writer/director Can Evrenol (“Baskin”) and his co-writer Kutay Ucun never really show viewers what sets these kids apart from other scrappy foundlings, like the Lost Boys from “Peter Pan,” the Lost Tribe kids from “Mad Max: Beyond Thunderdome,” or the Spanish Civil War orphans from “The Devil’s Backbone.”

More often than not, the depressed environment and weak dialogue is uninspired short-hand for archetypes that have already been reaffirmed by other, superior fairy tales; too bad, because it’s hard to care about characters who almost never try to unpack their emotional baggage (The Captain to Perihan: “It’s obvious you’ve been through a lot, right?”). So most of “Girl With No Mouth” is as symbolically meaningful as dumb ‘80s stadium rock songs like AC/DC’s “Rock and Roll Ain’t Noise Pollution,” where already-committed fans are encouraged to have faith that “rock and roll ain’t gonna die,” as if AC/DC were single-handedly trying to bump the value of rock and roll’s stock in a bear market. This is especially disappointing in a 2020 YA fantasy given that almost any of this year’s current events could believably be plugged into a dystopian narrative.

There’s also nothing inherently hopeful or compelling about watching a group of kids in raggedy clothes and after-school drama club-worthy props. The Captain wears steampunk-like welding glasses while Yusuf (Ozgur Civelek), his overweight, noseless second-in-command, wears dirty coveralls with only one functioning strap, and a rodent-like prosthetic snout that’s held in place by a white elastic band. The Captain says that he’s wary of “zombie” attacks, but his group always seem to be ready and on the move whenever Kemal eventually re-appears and tries to hurt Perihan. It’s almost as if these kids were smarter than we might think based on their raggedy clothes or proudly juvenile attitude …

The world of “Girl With No Mouth” isn’t just void of meaningful, let alone sustainable, inter-personal connections—it doesn’t even have significant-looking symbolism. Perihan carries a Snow White doll around with her, the Disney version with the yellow dress and the blue-and-red shoulder pads; her doll doesn’t have a mouth either. "Did you find this doll somewhere?” the Captain asks. “Was it your mom's?" Perihan looks away, so he changes the subject: “Want to hear an adventure?” Weren’t these kids supposed to be looking for the “Lost City”?

Maybe a better question is: shouldn’t “Girl With No Mouth” hint at something beyond a world of hackneyed storytelling tropes and hackier violence? Maybe something about how marginalized women are in even pseudo-progressive stories like this, as Yusuf suggests when he complains that “[Perihan] might be one of us, but it's bad fortune to have a woman on board.” Or how hopeful these kids are despite living in a future where adolescent stories are their only comfort, like when the Captain tries to describe the white horse that he, a “Pirate,” might ride, but only winds up joking about how his imaginary steed “smells a bit like horse sh*t.” And don’t get me started on the overbearing flute-and-strings score, which suggests Prokofiev’s “Peter and the Wolf” without ever approaching its quality or effect. I wonder when the zombies are going to arrive, and what kind of ironically cued classical music they like. 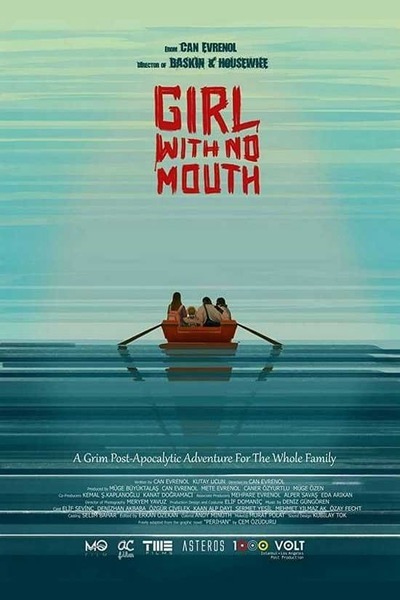