Do you remember the "Twilight Zone" episode when Richard Conte has a dream within a dream within a dream? You know the one: Conte thinks his life is a series of randomly juxtaposed dreams, and tries to wake himself up by jumping out a window. Imagine what that story would look like if it were filtered through the lens of Dario Argento's nightmare-thrillers and Rob Zombie's ghost-train freakouts. Turkish horror-thriller "Baskin" is that kind of blood-soaked entertainment, a lucid-dream-film that actively resists the logic/psychoanalytical structure of puzzle movies like "Inception." The breakout feature debut of director Can Evrenol, "Baskin" is a perfectly imbalanced mix of chilly atmosphere, heavy-handed symbolism, and familiar horror-movie tropes. The film's savage violence and wisp-thin Big Ideas may alienate you, but only to remind you that you're watching a film, especially during its grimy finale. "Baskin" does what many horror films try and fail to do: it makes you feel like you're a passive prisoner/spectator, watching as an especially vivid nightmare unfolds.

"Baskin" has a plot ... kind of. A group of Turkish police officers get drinks and tell dirty jokes at a small restaurant, then get involved in some weird doings when they're called to a nearby crime scene. But beyond that, "Baskin" is not really narrative-driven. Young policeman Arda (Gorkem Kasal) is our surrogate. He observes his comrades with suspicion, but goes along with whatever they're up to. Still, within the context of the film's slippery dream logic, it wouldn't be that unusual if Arda were to disappear suddenly. In fact, at one point, control of the narrative seems to shift to Seyfi (Sabahattin Yakut), a hungover police officer who sees something horrible when he divests the contents of his upset stomach all over a bathroom sink. In that moment, it's unclear who will steer the film's plot because realistically, "Baskin" isn't about Arda's journey. Arda just happens to be the youngest police officer, and therefore the one who is the least jaded, or corrupt.

"Baskin" isn't a completely /impossible-to-solve puzzle. While there is an unsettling nesting-doll plot structure—one story stops, then starts, then perhaps re-starts where the last dream left off—some parts of this dream-film are designed to guide you to a greater understanding of what you're looking at. In the first scene, a young boy hears what we can only assume are his parents having loud sex in the living room. We later learn that the boy is Arda, and the dream is a recurring nightmare. But in the moment, we do not know who the boy is, what's going on, or why he is startled beyond the intrusion of a disembodied hand that reaches out to grab him from somewhere off-screen.

The longer the film's plot unspools, the deeper we're dragged into a stew of literal-minded and abstract Freudian symbolism that resembles "Turkish Hellraiser," if such a thing existed. Arda's group is challenged by a religious cult that makes Clive Barker's Pinhead and his sadistic, God-like Cenobites look downright benign. Arda's comrades are told that their earthly authority means nothing, that they should prepare to be judged, and well, the rest should be seen and not read. I can tell you that the film's loftier concepts are too neatly explained during pseudo-mystical dialogue exchanges around this point, like when the main torturer sleepily declaims, "You carry Hell with you at all times" and, "You die as you sleep, you resurrect as you wake up."

That kind of bald-faced declaration may make you more squeamish than any simulated eye-gouging or disembowelment could. But how can you complain when Arda's company seems so real? You've met these guys, even if it was only when you were on holiday in a foreign country. They're the uninhibited, nosy locals that drove you in their taxis while blasting loud music, or maybe you saw them in a local restaurant as they gave you the eyeball and kibitzed heedlessly about everything and nothing (family illnesses, the weather and government corruption are favorite topics). You know these people, even if you avoided them.

And you know the feeling that "Baskin" thrives on: chances are that you've tossed and turned at night, and almost imperceptibly fallen from one dream into its sequel, and so on. You would be forgiven for ultimately resisting the hyper-real sensationalism that makes "Baskin" so off-putting. After all, how many close-ups of screaming men, simmering meat, and writhing monsters can you stomach? But if you submit to the film's inexorable pull, you may forget what elder exploiteers William Castle, Herschell Gordon Lewis and Wes Craven warned their prospective viewers: "It's only a movie. It's only a movie." 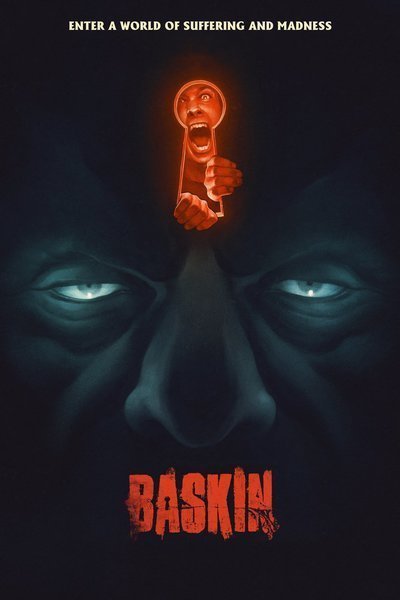