Girl on a Bicycle

Derek (Paddy Considine) is an Englishman living in Paris. He's spent years learning the language, and all his little heart desires is to find a French woman willing to speak French with him. Seems every French woman he encounters wants to speak English when they find it's his native tongue. He's been through three French wives, none of whom wanted to grant his linguistic wish.

Model Cecile Laurent (Louise Monot) speaks perfect French and doesn't mind being naked. She's the titular character of "Girl on a Bicycle." Due to an accident—she's a klutz—she's nursing a broken arm and a broken leg. While testing out her new bicycle in her apartment, the stationary platform suddenly comes loose. Cecile goes flying out her window, broken limbs all akimbo. She hits the conveniently placed café awning across the street, and lands in the arms of Derek, who just happens to be sitting there nursing a latte. Sounds like a respectable, dare I say clever, Meet Cute at the beginning of a romantic comedy, n'est-ce pas? Unfortunately, this happens almost an hour into "Girl on a Bike." The movie isn't about this relationship. Derek is merely a secondary character the screenplay trots out whenever it gets stuck. He hooks up with Cecile, but it's just a subplot. The real movie is happening elsewhere.

The bicycle that sends Cecile airborne was given to her by Italian transplant Paolo (Vincenzo Amato), the main character of "Girl on a Bicycle." Cecile's broken bones are also courtesy of Paolo, who ran her over with his gigantic tour bus while trying to get her phone number. As a result, Paolo must take care of Cecile and her two children, who think Paolo is their father. Paolo uses Derek to hide this activity from German flight attendant Greta (Nora Tschiriner), the fiancée Paolo was going to cheat on had he successfully obtained Cecile's number.

The word convoluted does no justice to just how poorly designed "Girl on a Bicycle" is. It is also stereotypical, unfunny, unromantic, absurd, sitcomish, insulting to several European ethnicities and a slave to what Roger Ebert used to call "The Idiot Plot Syndrome." It may be the worst romantic comedy I have ever seen, and this is not hyperbole. Usually, I like to go into movies with as little knowledge of their content as possible. Had I done my homework, none of the characteristics of "Girl on a Bicycle" would have surprised me. It's written and directed by Jeremy Leven, who wrote such cinematic cannon fodder as "Don Juan De Marco," "Alex and Emma," and "The Legend of Bagger Vance." You need a suspension of disbelief the size of Jupiter to buy what this guy's been selling, but even if you possess that admirable quality, it won't help you get through "Girl on a Bicycle."

Each character is reduced to the most common stereotype of their country. German Greta is a meticulous control freak who rules her airplane with an iron fist. She's so controlling she directs Vincenzo's marriage proposal. Brit Derek is an agreeable bloke who likes to drink and is polite even when being yanked off Cecile during sex by Vincenzo. Italian Vincenzo is a snob who thinks Italy is better than any other country. He makes pasta and talks with his hands. There's also a horny French pilot with perpetual, Jean Reno-approved 5-o'clock shadow. When not trying to bang Greta, the pilot advises her on matters of l'amour. His descriptions of Italian men should inspire protests.

Vincenzo tells whoppers of lies, hurtful lies that the screenplay cleans up in the most uninspired, cheating ways possible. He lies to Cecile's kids, who apparently have never seen their father. Cecile is not only fine with this, she lets this strange man (who ran her over, mind you) take her kids to school and stay in her apartment. Vincenzo also lies to Greta, who thinks he's having an affair but is so slow to act upon her suspicions that she loses all credibility. When Vincenzo takes a phone call during sex (Leven seems to think coitus interruptus is funny), then suddenly leaves, Greta's complaint isn't that he's leaving for points unknown at 3 AM, but that he didn't finish first. Really, Frau Thing?

Every single romantic comedy cliché is evident here! There are cute kids who repeat the same thing. ("I am siiiiix," says one. "I am fiiiive," says the other.) There's the overbearing score, the constant misunderstandings, the mere notion that one explanation would clear up those misunderstandings, and the characters whose brains must be concussed because their actions make no sense. Lest I forget the numerous lines that quiver with Meaning:

"I am going to give you the secret of life, pal. There's always gonna be a girl on a bicycle."

"If love doesn't have the power to forgive, what kind of love is it?"

The big romantic climax features Vincenzo barricaded in an airplane bathroom while all the inconvenienced fellow passengers sing an Italian song to win Greta back. I rolled my eyes, but then I remembered that a similar airplane sing-a-long worked in "The Wedding Singer." In fact, I could think of several other movies where plot elements employed in "Girl on a Bicycle" worked. But all those films had characters who made me care about their romances. Almost anything can be forgiven if you have two people the audience wants to succeed in love. There is nothing but failure here. 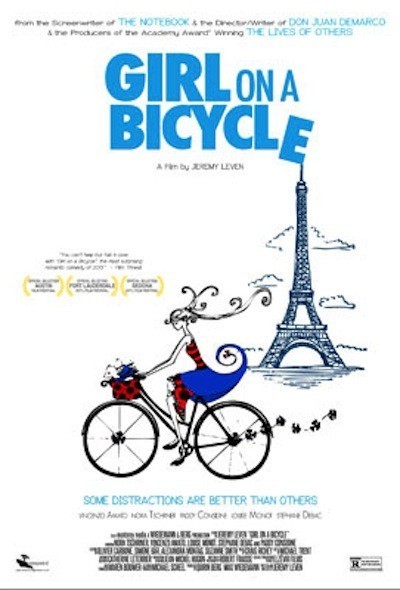