Get Away if You Can

First, I’m obliged to give credit where credit is due: co-directors Terrence Martin and Dominique Braun get major respect for shooting a large portion of this, um, relationship drama on a boat. Look up any account of a film shot even partially on a boat of any size or configuration and you learn: shooting on a boat is hell. Getting coherent shots on a boat is near impossible.

Spelling out its title one word at a time, in screen-filling white-on-black letters (kind of like in “The Irishman,” a bit Scorsese adapted from Godard), the movie opens with a cabin cruiser on a choppy sea under gray skies. The couple trying to make a getaway, played by Martin and Braun, aren’t enjoying themselves much. When the female tries to get amorous with the male in their bathroom, he pushes her away, pleading tiredness. Bored and distracted at the helm of the boat, he puts it on automatic pilot.

The characters aren’t given names, not even in the end credits (although said credits do give you Martin and Braun’s Twitter handles); given how many times Terrence Martin’s character yells for “DOMI,” one infers that the character played by Braun is named, well, Dominique. Their discontent is laid out in flashbacks. Martin’s bro-ish husband is hounded to no end by his woman-hating dad, played by Ed Harris, and lectured by his high-in-an-office good-earner brother, Riley Smith. In the meantime, wife Dominique thinks about her sister, who seems to be named Martina (Martina Gusman), back in Buenos Aires. “Mar” believes that “Domi” is living some kind of storybook romance. Would that it were so simple.

The boat trip is meant to bring back that loving feeling (which Harris’ character is seen aggressively undermining behind Terrence’s back) and it’s not quite working. Before setting out on the trip, Harris tells Martin “On this boat there’s one captain … she’s got to know her place.” Apparently their destination is Easter Island—Terrence says the surfing there is excellent; it is apparently a sign of his burgeoning maturity that he doesn’t call it “rad”—but Domi wants to stop at some islands on the way. “Those are called the islands of despair,” Terrence protests. “Those are the islands you go past!” Islands of despair. Huh.

Nevertheless, Domi, feeling broken, takes a dinghy to one of those islands, where she immediately thrives. Sets up a tent, makes a fire, catches some food, and she’s good. Terrence panics, gets drunk and then goes in pursuit. When he confronts her, she screeches at him: she wants him to take the boat and go. Which, regardless of the state of their relationship, sounds ever so slightly, well, lunatic.

As various slightly surreal interludes have already hinted (a scene in which Dominique dives off the boat in a red bikini, and then again naked, and then again in a long red dress, for instance), this movie is not entirely invested in realism. By the time Dominique, an enthusiastic dope smoker, runs out of skunk and plants a few seeds and voila, has an instant thriving pot plant, we may realize we are well and truly in the Land of Allegory. And so the island of despair turns instead to an island of, yes, hope. OR DOES IT?

The island portions of the picture were shot on Robinson Crusoe Island, a national park in Chile, and several short sequences hint at a non-colonialist Crusoe scenario. Martin, who sports several tonsorial stylings in the picture, is a startling sight in the nude with a vivid red beard and wild hair. Braun is similarly impressive in Earth Goddess mode. For all of that, the movie has an aura of indie navel-gazing that kept me at arm’s length. And I found Harris’ presence odd; it reminded me of that old Minute Maid commercial in which Robert Loggia shows up and the jaded little kid says “Whoa, Robert Loggia!” But really: good work with the boat. First class.

Now playing in select theaters and available on all major digital platforms. 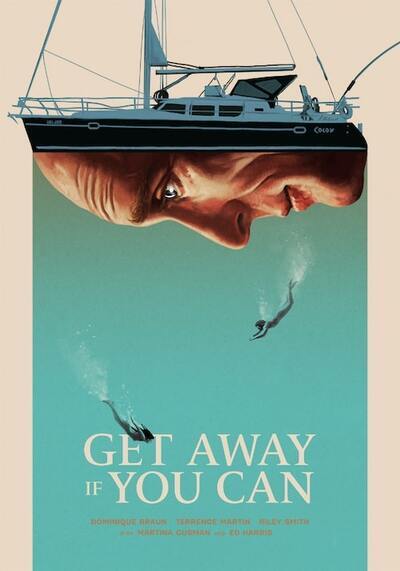