"Frankenstein's Army" is no perfect beast. This horror feature from director Richard Raaphorst and writer Chris Mitchell has all the hallmarks of what I call a "reel" film. By that I mean it's a feature length production demo reel with sets, characters and a story, kind of.

This movie about Russian soldiers battling Nazi-conjured Franken-beasts near the end of World War II is less interesting as a self-contained work than as a promise of things to come. It's a bravura if deeply silly demonstration of what clever moviemakers can do on meager resources. I wish it satisfied on its own terms, but its energy is engaging, provided you have a strong stomach for gore and are amused by old-fashioned analog monsters made of latex, rags, and diving helmets gutting Russian infantrymen as they shriek, "AieeeEEEEEEEE!"

You don't need to know much about the individual soldiers except that they conform to war-movie types: the young and decent and perpetually terrified newbies; the caring but beleaguered commander; the psycho who seems to want to rape and kill everyone and everything he comes across; the mostly faceless cameraman recording the nightmare and acting as audience surrogate.

That last character proves most important. This is a "found footage" picture, in the style of "The Blair Witch Project", "Cloverfield," "Rec" and the little-seen Vietnam War mockumentary "84 Charlie MoPic." "Frankenstein's Army" reminds me most of the latter, plus monsters. "MoPic" followed a long range patrol through a terrifying mission, and let scenes play for as it took for a reel of 16mm film to run out. In "Frankenstein's Army," as in "MoPic," we're theoretically seeing fragments of the filmed mission in sequential order, with rough splices, abrupt cuts-to-black, and color flares caused when a reel runs out.

The use of a constantly-roving single camera lets the director stage long sequences of soldiers stalking and being stalked, and hiding, and shooting, and running through corridors. Sometimes the camera swings unexpectedly to reveal a creature half-glimpsed through a doorway, or galloping toward a future victim on stilt-like, oddly bent legs, or ripping into a screaming soldier with absurd lobster claws. At its worst, the action scenes suggest a re-enactment of a halfway decent first-person shooter game. At their best they have a sinuous, horrible beauty, with the creatures galumphing through gloom and smoke. From some angles they look like human-sized versions of the monsters Godzilla used to fight during the glory years of Toho Studios. This is good: I'd rather watch model-shop ingenuity than another $200 million CGI slugfest between superheroes or robots. Even the worst analog monsters betray a human touch.

That said, Raaphorst and his cinematographer Bart Beekman don't take their conceits as far as they could. As in so many found-footage horror movies, the format starts to feel like a gimmick or a crutch: a way to spice up a script whose shortcomings might be even plainer had the tale been told straightforwardly. Film buffs might be annoyed by production design gaffes—for instance, the fact that the movie is in color rather than black-and-white (uncommon in 1945); and that it's filmed in 16x9, the modern rectangular standard format for movies and TV, rather than the older, more squarish "Academy" ratio of 1940s documentaries, and that the cameraman seems to have gotten hold of a lightweight synchronized-sound 16mm camera roughly fifteen years before such cameras were perfected by the American documentarian Robert Drew. The filmmakers were bold in their choices of period and format, but not patient enough to do right by them.

Maybe I'm nitpicking these aspects of "Frankenstein's Army" because its aura of specialness isn't bright enough to obscure its inadequacies. Or maybe I'm annoyed that the film denied us the sight of a bored sound guy in flip flops, shorts and a trucker hat fending off a Franken-soldier with his boom pole, then screaming in mortal agony as the beast's pinchers sank into his "Not My Problem" t-shirt. Yes, that's it. 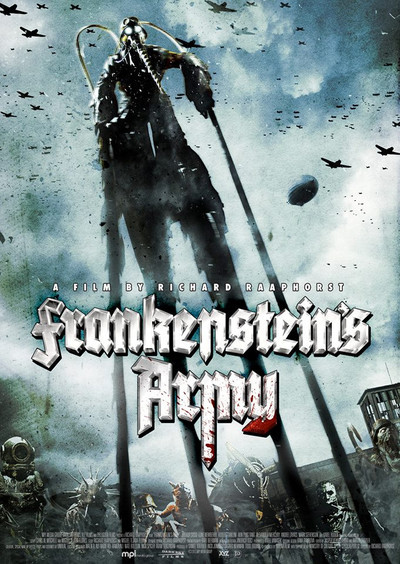