Restless and clueless 20somethings who share a loft in Brooklyn’s hip Williamsburg neighborhood, they can barely do something simple like go for an afternoon bike ride without having it turn into a debacle. They are emblematic of millennial entitlement; rather than work toward a fulfilling life and risk failure, they’d rather make fun of everyone around them in catty, detached fashion and expect success will simply come their way. Strangers and friends alike exist for their use, abuse and amusement. But while they’re high on snark, they’re low on smarts: They’re not nearly as capable as they think they are, individually or as a duo.

So why should we bother spending an hour and a half with these people, much less care about them? Because eventually, they end up being more wounded, complicated and sympathetic figures than we could have imagined at the outset. And because – whether or not we’d like to admit it – they’re willing to say what the rest of us are thinking when they tactlessly open their mouths without a filter.

It’s difficult to create enjoyably unlikable characters; a fine line separates hilarity and hostility. For all its bull-in-a-china-shop crassness, Larry David’s persona is a delicate thing to pull off well. With “Fort Tilden,” writer-directors Sarah-Violet Bliss and Charles Rogers have created two women who are drawn so vividly and so viciously, they’re hard to dismiss. And with great chemistry and – ultimately – vulnerability, co-stars Bridey Elliott and Clare McNulty bring them sharply to life.

In their ditziness and daffiness – as well in their in their codependency – Harper and Allie are like a toxic version of the lovable airheads Mira Sorvino and Lisa Kudrow played in “Romy and Michele’s High School Reunion” or the deluded pals June Diane Raphael and Casey Wilson portrayed in the lesser-seen “Ass Backwards.” They need each other. They love each other. But they’re also holding each other back from facing adulthood – all of which will play out over one long and spectacularly disastrous day.

When we first meet Harper and Allie, they’re trading insulting texts while enduring their friends’ rooftop acoustic guitar performance, which is (admittedly) shrill and self-indulgent. But the night isn’t a total waste: They end up meeting a couple of guys (Jeffrey Scaperrotta and Griffin Newman) whom they awkwardly flirt with and make tentative plans to meet the next day at the beach at Fort Tilden. (Awkwardness, by the way, is the name of the game throughout as the ladies stumble from one uncomfortable situation to the next – usually of their own making.)

A late wake-up leads to a scramble to find bikes (Neil Casey appears briefly and amusingly as the needy upstairs neighbor who helps them). Every decision they make before they leave the house is inspired by vanity: no breakfast, no sunscreen and a carefully placed copy of David Foster Wallace’s “Infinite Jest.” Then there’s a side trip to Prospect Park to get some Molly from Harper’s hot ex (Peter Vack), who ends up being the voice of reason even though he’s the most outwardly vapid person in the film. (“Are you a hat person now?” he asks derisively of Harper’s style choice for the day.) And on and on it goes through various neighborhoods on a palpably steamy late summer day in Brooklyn.

After suffering through exhaustion, caffeine withdrawal, hunger, confusion and a brutal argument that neither of these studiously blasé women was prepared for, they eventually reach the beach. (It’s not a spoiler – it’s the image on the poster.) And here’s where they’re finally forced to expose themselves in every sense of the word. To this point, Elliott and McNulty have navigated the highs and lows of their adventure – and their friendship – quite deftly. By the conclusion, they actually make you feel sorry for their characters because you realize that they finally understand how deeply and hopelessly lost they are. The fact that their destination ends up being so desolate effectively adds to their feeling of isolation.

Advertisement
Just as it’s difficult to decide whether to like or hate Harper and Allie, it’s hard to determine whether the end of “Fort Tilden” offers a moment of hope or resignation. As much as Bliss and Rogers are indicting the worst qualities of today’s post-collegiate generation, they also seem interested in exploring how young people use cynicism or cruelty to deflect their own insecurity or fear of responsibility. When Allie describes a song as “tediously adorable,” the intriguing contradiction is all-too fitting. 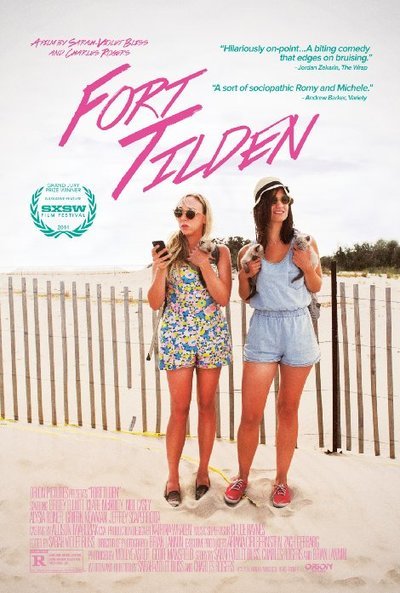