"Ass Backwards" takes its title quite literally from the very beginning, matter-of-factly offering us the image of two women from behind, squatting side by side as they relieve themselves in broad daylight, their urine trickling in parallel streams down the sidewalk.

Co-stars, co-writers and longtime collaborators June Diane Raphael and Casey Wilson have chemistry and energy to spare as a pair of bubble-headed best friends stumbling from one scenario to the next. The Upright Citizens Brigade alumnae and college best friends don't have to work to hard to convince us of their connection. It's infectious, and the daffy, breezy way they play off each other makes "Ass Backwards" way more enjoyable than it ought to be.

Their delightful zaniness remains a constant even when the predicaments their characters find themselves in can be rather hit and miss and often strain for laughs in director Chris Nelson's feature debut.

Raphael and Wilson star respectively as Kate and Chloe, aimless but unflappably upbeat women sharing an apartment in New York City. Pushing 30, they still have no real goals, although they've fashioned pseudo careers for themselves. Kate is an "entrepreneur" (she sells her eggs on Craigslist to couples trying to conceive) while Chloe is an "entertainer" (she's a listless go-go dancer in a box at a nightclub). They live on maxed-out credit to create the illusion of luxury, hoping to convince both the outside world and themselves that they've really made it.

But when Kate and Chloe receive an invitation to return to their hometown to compete in an anniversary edition of the beauty pageant they both lost as young girls—the crucial moment in their childhood that bound and defined them—they can only pretend to be cool about it. The prospect of redeeming themselves is too tantalizing, especially in front of their longtime nemesis, a pageant goddess turned best-selling author (a smarmily condescending Alicia Silverstone).

And the timing is perfect—sort of—because they've just been evicted from their apartment, forcing them to go somewhere. Now. So they load up a rickety van with totally impractical belongings, program the wrong directions into the GPS and hit the road. Their scattered adventures along the way feature a highly symbolic bunny rabbit, a strip contest (where Raphael's real-life husband, Paul Scheer, plays the club manager), a down-and-dirty interlude with a drug-addicted reality TV star (Brian Geraghty) and an overnight visit to a women's commune which (sort of) alters their notions of femininity.

As with any kind of episodic or sketch comedy, some gags land more effectively than others, although you'll likely find a line or a beat or an image that makes you laugh from start to finish. Through it all, the actresses seem game for anything, staying completely committed to the delusional characters they've created and reveling not only in their flamboyance but also in their vulnerability. They allow us to genuinely enjoy these women (although spending 85 minutes with them is plenty) while also recognizing their flaws.

Raphael and Wilson (and Kate and Chloe) owe a great debt to "Romy and Michele's High School Reunion," the still-hilarious 1997 comedy that was both silly and sweet and allowed clueless female characters to be ditzy and shallow while remaining true to each other. Despite Raphael and Wilson's fondness for pushing the humor into brash, crass directions (as evidenced by that opening shot), their characters clearly have an innate decency and a loyalty to each other that's heartening.

At the same time, "Ass Backwards" is a welcome departure from the script they co-wrote for 2009's "Bride Wars," an ugly example of longtime female friends tearing each other apart for the sake of broad laughs. Even when the cracks in Kate and Chloe's cheery, colorful exterior begin to show, it's clear that they still love each other, and they'll live to shop together another day. Raphael and Wilson's friendship—and their collaborative efforts—are just as promising. 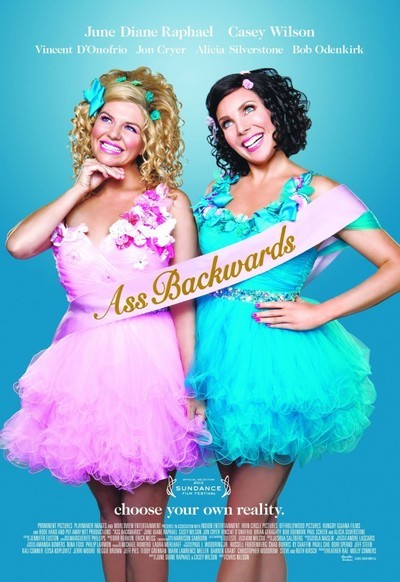