It's sort of insidious, the way a formula can take over and smother a good idea for a movie. “Fort Apache, The Bronx” apparently began as such an idea. It's said to be based on the experiences of a couple of real cops in the worst area of New York's Bronx. The area looks like a bomb site, with burned-out buildings and people. The filmmakers wanted to go into this area and use a police story as a framework for showing how people live and suffer there, and how public agencies such as the police grow frustrated trying to deal with an impossible situation. That was their intention, anyway. What they came out with is the most complete collection of cop-movie clichés since John Wayne played a Chicago cop in “McQ”.

There were authentic perceptions and ideas available to this film, and you can see them on the screen. You can see them in the look of some of the shots, tracking across the urban wasteland, and in the sound and feel of a scene where a pimp beats and berates one of his girls, and the grim humor of a scene where a thief outruns a cop, who pauses, gasping for breath, and lights a cigarette.

But then there's a story line that keeps getting in the way. There are too many scenes that are necessary to the plot but not to the movie, scenes where the life of the movie stops so story details can be filled in. And we realize that somehow Hollywood hasn't wanted to get too close to this material. Instead, it has borrowed a look of grim authenticity and grafted it to assorted cop show situations.

The movie stars Paul Newman. He's good in his role, as a cop named Murphy who simultaneously falls in love with a nurse, witnesses his fellow officers committing a murder, and has a battle of will with his commanding officer. The chief is played by Edward Asner, who is in the movie so briefly that, effective as he is, we have trouble remembering he's a cop. He's still Lou Grant, barking orders in the sqaud room instead of the city room.

The movie has several story threads that lead nowhere. One involves Pam Grier, as a junkie prostitute who wanders the streets in a daze, kills a couple of cops, and then turns out to have been basically a walk-on, and not the key to the movie's mysteries. There are also several whole scenes that seem to have been put in without much purpose, including one in which Newman and his partner try to talk a transvestite out of jumping off a building, and another in which Newman delivers a baby. Then there's a big climactic scene, with drug dealers holed up with hostages and the SWAT boys (and Newman, of course) crashing through windows on the ends of ropes.

These scenes all seem to be in the movie because the filmmakers thought they belonged in any self-respecting cop movie. Too bad. The purely human story in this movie would have been much more interesting. It involves Newman's relationship with the Puerto Rican nurse (wonderfully well-played by Rachel Ticotin) and the crisis of conscience he goes through about whether to turn in his fellow officers after he saw them throw a kid off a roof.

Do the filmmakers feel we're not ready for issues like that, served straight? Do we need violence and action to keep our attention? Is our attention span so short that no strand of character development can be followed for long without throwing in some kind of sensational diversion? I hope not. To throw in all the stock characters and shopworn situations from old TV cop shows is an insult to the abilities of the actors and to the real lives this movie pretends to reflect. 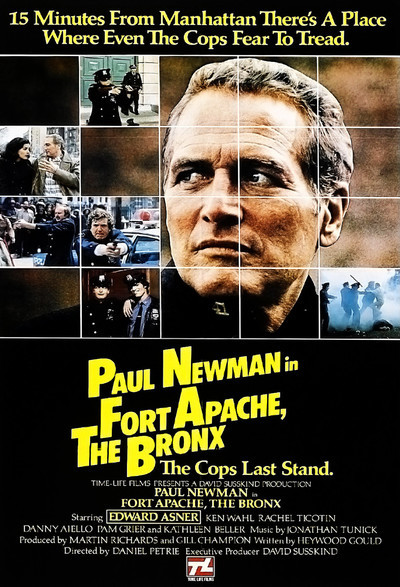