For the Love of Spock

“For the Love of Spock” is more than just catnip for Trekkies. It’s also an often painful examination of the rocky father/son relationship that existed between filmmaker Adam Nimoy and his famous father, Leonard. Released to coincide with the 50th anniversary of “Star Trek,” Nimoy’s documentary originally planned to focus specifically on the show’s Vulcan character, Mr. Spock. When Leonard Nimoy died in 2015, his son widened the scope of his film to encompass his entire life and career. The result is a lively, often hilarious collection of talking heads that includes fans and actors from the original and current incarnations of “Star Trek,” plus footage of Leonard Nimoy in the numerous roles that were overshadowed by his most famous creation.

Much of the film is narrated by Leonard Nimoy, who immediately jumped at the chance to work with Adam for the first time since their collaboration on the remake of an old “Outer Limits” episode 10 years prior. Nimoy plays the same role in both versions, which the film juxtaposes to show not only the passage of time but also the equal amount of commitment put into both performances. It was one of many pre-Spock roles Nimoy played when he arrived in Hollywood from Boston. ““I must have looked like I just got off the boat from Transylvania,” he says of his arrival. Despite getting somewhat steady acting work (the clips of the actor as a young, strikingly handsome man are fascinating to behold), Nimoy supplemented his gigs with a wide array of jobs that highlighted his workaholic tendencies.

“He hustled his ass off in the '60s,” says Adam Nimoy with a tinge of wonder in his voice. “He could do anything,” “For the Love of Spock” cycles through a long list of people who mention the various jobs Leonard held. He serviced fish tanks, drove a cab, had vending machines, ran an ice cream parlor and managed an apartment building, among other things. But it was an appearance in a 1965 episode of “The Lieutenant” that got “Star Trek” creator Gene Roddenberry’s attention. “He’d make a good alien,” Roddenberry said. It was a mild understatement, to be sure.

Trekkies can probably recite by heart many of the details this film provides about the show. When NBC considered Roddenberry’s original pilot too cerebral, he created a new version featuring a different lead actor, William Shatner. Had NBC completely gotten its way, Shatner would have been acting opposite a different alien; the network considered Spock too “satanic looking” and feared he’d offend the Bible Belt viewers. Those same viewers may have contributed to the truckloads of fan mail, and carloads of fans, that came to the Nimoy household after the show’s first few episodes. “People were stealing leaves and grass from our front yard,” Adam Nimoy recalls. And this was before the show’s 1969 cancellation and syndication deal created the type of cult status that made its first convention in 1972 a rousing success.

Though Shatner’s Kirk was the show’s overly emotional lead, more people saw themselves in the mostly emotionless Spock. He predictably resonated with young science lovers in training like Neil deGrasse Tyson and NASA employees Bobak Ferdowksi and Amy Mainzer, whose interviews mention Spock’s thirst for knowledge. But “For the Love of Spock” shows that Spock also appealed to anyone who felt like a societal odd man out. For example, Ferdowski points out that, as a biracial person, he felt a kinship with Spock’s half-human, half-Vulcan identity and its accompanying trials and tribulations. And at his first Trek convention, Adam Nimoy interviews several people with similar stories of how some unusual aspect of their being led them to being lifelong Spock fans.

“They are the yin and yang in front of the camera,” says George Takei, the original show’s Sulu, of Shatner and Nimoy. Shatner confirms this before taking a playful swipe at the singing “careers” he and Nimoy shared. “He was a better singer than I was,” says Shatner. “He could hold a note—off-key, but he could hold it.” The younger Nimoy also can’t help ribbing his Dad’s warbling: in a revised “Star Trek” scene he substitutes Leonard’s awesome, infamous music video for the Hobbit-loving ditty, “The Ballad of Bilbo Baggins” for whatever originally inspired the USS Enterprise crew’s horrified response.

Scenes like this reflect the level of thoroughness “For the Love of Spock” has for Leonard Nimoy’s career. “Fans of “Mission: Impossible” and (my personal favorite) “In Search Of” are rewarded with clips from each show along with Nimoy’s own commentary about them. Nimoy’s directing career, which often goes forgotten nowadays, is also celebrated. We’re reminded us that he not only directed the best film in Paramount’s original “Star Trek” movie series (“Star Trek IV: The Voyage Home”), but he also directed the series’ prior installment and the box office hit “Three Men and a Baby." Alas, there’s no Steve Guttenberg talking head interview in “For the Love of Spock," which is bound to disappoint legions upon legions of viewers.

But seriously, while “For the Love of Spock” is a very entertaining and light-hearted look at the man behind Spock’s pointy ears, there’s an underlying sadness that Adam Nimoy never lets us forget. The tensions between fathers and sons has always made for compelling drama, and the tale of Adam and Leonard includes alcohol and drug addiction and the aftereffects of fame depleting a father’s time with his children. Nimoy uses a powerful letter of explanation written by his father in 1973 to great effect, reading it in fragments throughout the film as a dramatic counterpoint. The director also uses footage of a “Viking funeral” of sorts for Spock (and by extension, his portrayer) at 2015’s Burning Man as a haunting, cathartic visual elegy, closing the film on an effective moment of tribute. 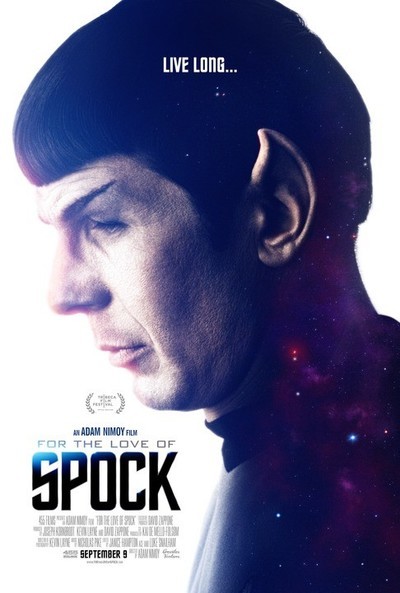 Leonard Nimoy as Himself (archive footage)

J.J. Abrams as Himself

Nichelle Nichols as Herself

Zachary Quinto as Himself

Chris Pine as Himself

Simon Pegg as Himself