"For A Woman" tells a story that is pretty much fraught with both romantic and political intrigue and it is therefore a little surprising to report that the end result is itself not especially intriguing. This is a bit of a shame because this is obviously a deeply personal story for French filmmaker Diane Kurys (best known for her 1983 breakthrough "Entre Nous") but she never quite manages to generate the amount of excitement required to make anything memorable out of the fairly familiar material.

As the film opens in 1991, filmmaker Anne (Sylvie Testud) and her older sister Tania (Julie Ferrier), still reeling from the death of their mother three months earlier, are visiting their ailing father when Anne comes across a suitcase belonging to her mother containing photographs and letters that force her to reassess everything she knew, or thought she knew, about her parents. Fascinated by the story they tell, she begins to transform them into a screenplay that winds up forming the bulk of the film.

The story proper opens in 1945 as Ukrainian couple Michel (Benoit Magimel) and Lena (Melanie Thierry) are settling in Lyon and preparing to have their first child. The two were incarcerated in the same prison camp during the war, and when Michel, a former Foreign Legionnaire and a member of the Communist Party, was granted his freedom, he insisted that Lena, who he had never actually met, was his fiancee and needed to go with him. Grateful to him for saving her life, Lena agreed to marry him but while the two care for each other, there is a palpable mismatch in the tenor of their affections for each other—he genuinely loves her while she feels more of a sense of obligation to him than any real passion.

Two years later, Michel is running a small tailor shop and attending local Communist Party meetings while Lena is in the apartment upstairs raising Tania and trying to stave off an overwhelming sense of boredom. That all changes with the unexpected arrival of Jean (Nicolas Duvauchelle), the brother that Michel had assumed had died long ago. As it turns out, Jean joined the Red Army and one of his duties now is to clandestinely track down Nazis and collaborators and bring them to justice. At first, the reunion is happy enough but tensions between the two brothers begin to arise—Michel's idealized view of communism doesn't exactly jibe with Jean's real-life experiences under it—and things become more complicated when a different sort of tension begins to develop between Jean and Lena.

Although there is nothing particularly surprising on display in "For A Woman," the story does work on some basic, fundamental level, most of the performances are pretty good and it is certainly a handsomely mounted production. And yet, while it never falls below the level of general competence, it never really rises above it either and after a while, most viewers will find themselves feeling the same sense of ennui as its heroine does in the early going. Considering the personal stake that Kurys clearly has in this film, the overall lack of passion is disconcerting at times—too often, it feels like a piece of product being made by a disinterested director who is just going through the motions in exchange for a paycheck. By comparison, Claude Miller's "A Secret" told a somewhat similar story to the one presented here but did so with far more power and drive than Kurys is able to muster.

There are two bigger problems with "For A Woman" besides the general lack of excitement to the proceedings—one structural and the other emotional. The modern frame with Anne trying to piece things together is an unnecessary distraction that takes away from whatever head of dramatic steam the story proper has been able to generate and basically wastes the usually lively Testud in a role that offers her little to do. The other problem is that the character of Lena, who should be the dramatic and emotional center of the film, fails to make much of an impact on viewers, due in large part to the overly passive performance by Melanie Thierry, an actress who has done good work in the past (as in "The Princess of Montpensier") but who comes across here as little more than an exceptionally gorgeous blank who never seems to be playing a real part in these proceedings.

"For A Woman" never quite manages to turn the corner in a way that justifies its existence as anything more than a handsomely mounted but emotionally inert time-waster. 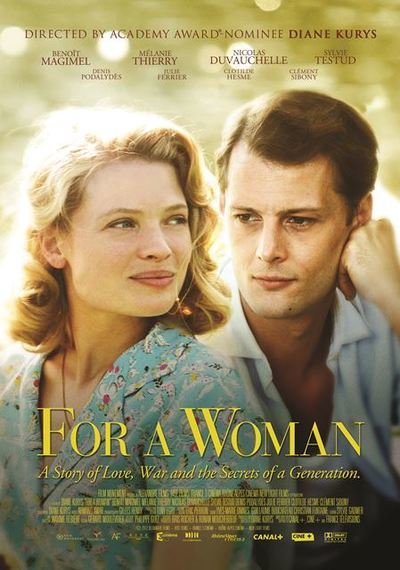