A rambling road trip story with no real point to it, “Folk Hero & Funny Guy” attempts to be a sweet comedy about two friends in respective ruts attempting to break out of them together. Instead, it’s mostly a series of loosely connected scenes about such a concept combined with a needless, half-baked love triangle. It’s a strangely aimless film with some good ideas but it never follows through.

Jason (Wyatt Russell), an indie folk rocker who supposedly mixes “the good times of Wilco with the authenticity of Bob Dylan,” and Paul (Alex Karpovsky), a struggling stand-up comic with no stage personality of which to speak, are good friends from childhood. After Paul’s rough breakup with his fiancée, Jason decides to take him on a brief East Coast acoustic tour as an opening act to get his mojo back. Along the way, the two meet cute up-and-coming singer Bryn (Meredith Hanger) and decide to bring her along on tour. Though Paul quickly falls for her, Jason swoops in early on, creating tension between the two of them, which only increases after Jason discloses his real reason for the tour (spoiler: it’s another woman) while Paul tries to leave stand-up behind for good.

The good ideas implicit in the script mainly involve Paul’s attempt to extract himself from comedy in order to get a “real” job in advertising. Jason, the more successful of the two, tries to keep pushing him along the artistic path because of his disgust for the rat race. Yet the truth is that Paul isn’t a very good stand-up, he’s just been doing it long enough where he feels comfortable bombing on stage telling the same jokes about Evites. Of course, all Paul needs to do is be himself on stage and he’ll unlock some magical portal into comedy stardom or whatever, but writer/director Jeff Grace ignores the more interesting path “Folk Hero & Funny Guy” could take: someone slowly learning that it’s time to hang it up as his best friend continues to reach for the stars.

Naturally, the film instead becomes a slog until Paul and Jason finally have their climactic fight where they say what they really mean to each other. This might work better if Russell and Karpovsky had better chemistry together, but while they’re both fine individually, they don’t really work as a duo let alone as “good friends.” The same goes for the third wheel in the triangle, as the film also hinges on Karpovsky and Hanger creating sparks on screen, and yet that doesn’t really pan out either. All three actors seem to be having a good time, which might be enough in another film, but since none of them can imitate friendship or intimacy between each other, it all feels a little empty.

“Folk Hero & Funny Guy” coasts on an amiable indie charm that might be palatable to some but will likely induce eye rolls and throat gags in others. There are the obligatory cameos from beloved actors we know and love, like Melanie Lynskey, Michael Ian Black, and David Cross, who all do good work. There’s the bright visual aesthetic that feels almost blinding at times. Russell and Hanger both sell the hell out of their music, courtesy of Adam Ezra, but it’s nevertheless largely bland and unmemorable. The best thing that can be said about “Folk Hero & Funny Guy” is that Grace does right by his female characters, especially for such a male-dominated film, in that it provides them enough self-awareness and agency to walk away from or call out the more devastating flaws in both Paul and Jason. Oddly enough, it’s those flaws, as well as the basic indications of human friendship, that needed to be developed more for “Folk Hero & Funny Guy” to really take off. 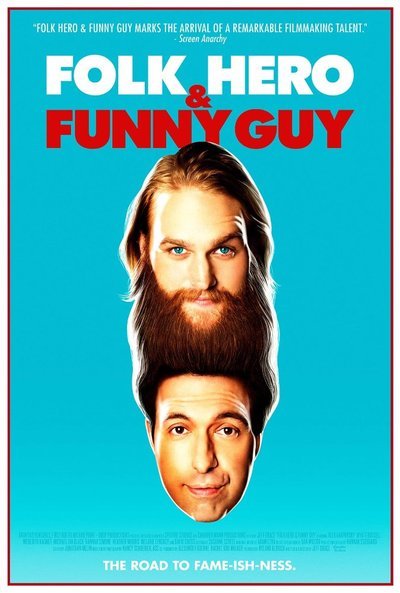