With the through-the-roof achievements of his penetrating marital drama “A Separation” in 2011, Asghar Farhadi leapt over several of his world-renowned countrymen to become the most internationally successful Iranian auteur yet. After capturing the Golden Bear at Berlin, the feature, Farhadi’s fifth, went on to rake in unprecedented earnings for an Iranian film as well as a stream of honors that culminated in its becoming the first Iranian film to win the Oscar for Best Foreign Language Film.

Given the wide interest the film excited, it’s hardly surprising that curiosity regarding Farhadi’s little-seen earlier work has grown since. While he subsequently made a well-regarded drama set in France (“The Past,” 2013), U.S. viewers have recently been given the chance to see the two terrific films that preceded “A Separation”: “About Elly” (2009) was released last year, and “Fireworks Wednesday” (2006) arrives this week.

Although the three films can’t be called a trilogy, in a sense they form a group. Farhadi’s first two features, “Dancer in the Dust” and “Beautiful City,” were more typical of Iranian films in their relatively conventional (if very assured) styles and especially in their focus on lower-class or marginal characters. With “Fireworks Wednesday,” Farhadi turns his attention to the Iranian middle class and the strains within the marriages of people who are materially comfortable. Farhadi also introduces a style that is cooler, more intricate and refined. While “About Elly” displays these qualities at their most expansive and dramatically charged, “Fireworks Wednesday” is inarguably the film that most resembles “A Separation” and lays the groundwork for its brilliance.

The main location in both films is the apartment of an upper-middle-class Tehrani couple, yet the characters include not only that couple but also one from the lower social echelons. With a bit of clever misdirection, “Fireworks Wednesday” introduces the poorer characters first. Roohi (Taraneh Alidoosti) is a bright-eyed, young servant-for-hire who’s due to marry her boyfriend next week. Soon after we meet the two, they’re riding his motorbike on a mountain road when her chador gets caught in a wheel, forcing them to an abrupt stop. Though they laugh it off, the troublesome chador will recur in the film, essaying both symbolic and dramatic roles.

The same day she tries on her wedding gown, Roohi is assigned a job at an apartment in a ritzier district of Tehran. It is Fireworks Wednesday, a rowdy holiday that precedes the spring-equinox arrival of the Persian New Year (this year on March 20). (Because it dates from Zoroastrian times, Fireworks Wednesday is held in suspicion by Iran’s Islamic rulers; it has figured into other Iranian films, including Jafar Panahi’s “This Is Not a Film.”) Due to the celebration, fireworks are going off constantly outside, but if that makes Roohi’s snazzy place of employment sound like a war zone, it also looks like one: there’s a broken window, glass on the floor and furniture in wild disarray.

When she enters, Roohi finds the man of the house, Morteza (Hamid Farokhnezhad), talking agitatedly on the phone and waving a bandaged hand. When his wife, Mozhde (Hediyah Tehrani), comes in, the cause for this home’s disturbed appearance becomes evident: the couple’s marriage is rocking on its foundations. Husband and wife go at each other bitterly. He yells at her, “You’re so damned neurotic!” then storms out, supposedly headed for work. But she suspects even this is a lie, and later will swipe Roohi’s chador to use as a disguise when she goes to spy on him—a provocation that ends with him beating her in the street. (This crucial scene occasions one of Farhadi’s most startling stylistic maneuvers: As the action in the street occurs, the camera remains planted in the elevator Morteza has used to reach his wife, even as it ascends again.)

By the end of the story’s first act, we’ve learned the reason for the marital meltdown. Mozhde suspects her husband is carrying on an affair with an attractive divorcee named Simin (Pantea Bahram), who operates a beauty salon out of her apartment on their floor. But is Morteza really being unfaithful, as various clues suggest? Or is Mozhde, a woman hemmed in and perhaps unhinged by the restrictions and pressures Iranian society places on women, fantasizing the infidelity? This question will be answered later in the film, but even before discovering the truth, the innocent, youthfully optimistic Roohi gets a chillingly disillusioning lesson regarding the harsh realities of marriage—at least among her elders and social betters.

Given this story’s implications as a social critique, it might seem surprising that it got past the ever-watchful censors of the Islamic Republic. But Farhadi is skilled in the careful subtleties and understated symbolic nuances developed by previous Iranian filmmakers, and he has a special weapon in his own arsenal: maximum complexity. As he does to such masterful effect in “A Separation,” here he constructs a story that keeps revealing new thematic and psychological layers, ones that often come to light through the shifting of perspective from one character to another, a technique that deepens our sympathy for the people we’re watching to the point of our realizing that, as in Renoir, “everyone has their reasons.” And while a critique of Iranian society is certainly implied, the narrative complexity means that its exact meaning is left to the viewer. Indeed, while some may trace the problems evoked here to the impositions of a state that tries to impose religion by law, Iranian conservatives might deduce that this marriage’s problems come from the couple being too selfish, Westernized and removed from religion. No wonder the censors weren’t quick to pounce.

The film’s style exhibits a similar purposeful complexity. Using cinematographer Hossein Jafarian’s crisp images, Farhadi develops the mode of camerawork that would characterize his subsequent films, a technique that involves constant movement and reframing (especially in the apartment’s beautifully designed interiors) in order to follow the shifting of perspectives among characters as well as the story’s emotional twists. While the style in some moments recalls American filmmakers including Altman, Lumet and Kazan, its distinctiveness and eloquence ultimately testify to the gifts of Farhadi, one of the contemporary cinema’s most essential masters. 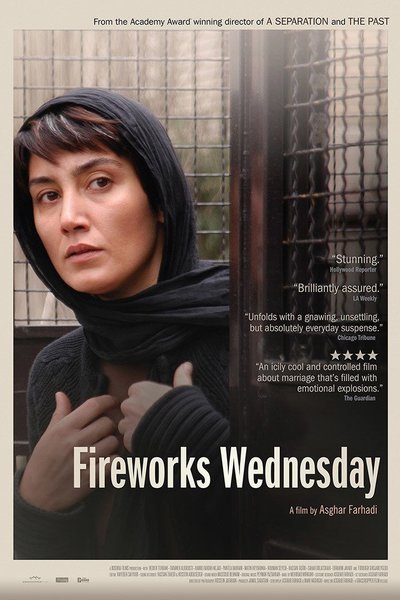