It’s a post-apocalyptic wasteland but Tom Hanks plays a character named Finch Weinberg who sings “American Pie” and listens to Perry Como. Also, he has an adorable dog and an endearing robot. All of this makes “Finch” a comforting, cutesy sort of post-apocalyptic wasteland, more like an updated “Pinocchio” than a searing exploration of what it takes to cope with the direst possible circumstances. "Finch" is more of a fairy tale, about a man whose interactions and experiences with the robot he created may make him a mechanical-plus AI version of a real boy. As he showed in “Cast Away,” Hanks can make conversations with inanimate objects lively, engaging, and even emotional. But that film’s Wilson volleyball wisely stayed silent. “Finch” gives us a robot who not only talks, he learns and grows.

A sun flare has wiped out the ozone layer and most human, animal, and plant life on Earth with devastating radiation. Now, even a few seconds in sunlight burns exposed skin. Finch, once an engineer and computer whiz, is a loner and a tinkerer by nature. Creating gizmos and foraging in a high-tech hazmat suit has kept him occupied and helped him stay alive for 15 years after the end of nearly everything. Goodyear the dog and a cute little robot named Dewey (like the one in “Silent Running”) are his only companions. But as the movie begins, Finch has to make some changes. One of them concerns a fast-approaching storm that's so devastating they can no longer stay in his home/lab in St. Louis. The other conflict becomes more apparent when we see Finch cough up blood. And so, he builds a bigger robot, scanning his entire library to upload it as memory. But the storm is getting closer very quickly. There's a moment of wry humor as the computer program Finch is using to program the robot responds with an all-too-familiar message on the screen: “Please call technical support for assistance.”

Because they have to hurry, only 72 percent of the data is uploaded to the robot, and there's only time for a just a couple of quick lessons on vital matters like walking without falling down. But Finch cannot resist investigating what his creation can do. “Tell me something interesting,” he says, and then, when the robot (voiced by Caleb Landry Jones) responds with a fact about giraffes, he says, “Tell me something interesting about you.”

Like any good engineer, Finch has programmed the robot with Isaac Asimov’s famous directives, but he adds another, superseding directive. Instead of Asimov’s primacy of human life and welfare, Finch tells the robot that his first priority is to care for the dog. As the storm arrives, they leave in a 1984 Fleetwood RV fueled by solar panels on the roof. Finch wants to go to San Francisco and see the Golden Gate Bridge. He has never seen it, but he's had a postcard with a picture of it since he was a teenager. He has no idea whether it's safe there, but they will “head west over the mountains in search of places that haven’t been ransacked and looted.”

And so, like all road trip movies, there is a destination (1,811 miles away, the robot notes) with many opportunities for conflict with outside forces and with each other. There are also dangers along the way. Finch gets frustrated with his creation, and with his inability to program him to be everything he needs.

The robot may only have 72 percent of the uploaded data, but it clearly has some very powerful machine learning AI. Caleb Landry Jones impressively shows the carefully calibrated voice and movements of the robot as he becomes more “human” along the way. (Given the masculine name and voice, I’m going to refer to it as “he.”) His posture straightens, he develops the ability to understand idioms and metaphors, and his speech becomes clearer and more expressive. He also shows his increased sense of personhood by asking for a name, though he also shows a still-limited understanding with the first few names he suggests.

Hanks is wonderfully watchable as always and effortlessly holds the screen with only the briefest appearances from other human actors. The cinematography from Jo Willems is stunning and elegiac, finding beauty in ravaged landscapes and making one brief moment of respite seem almost miraculous. But the screenplay is not up to that level—it's predictable, inconsistent, and too often heavy-handed. Hanks does his considerable best with Finch’s revelations and confrontations, but the writing lets him down. 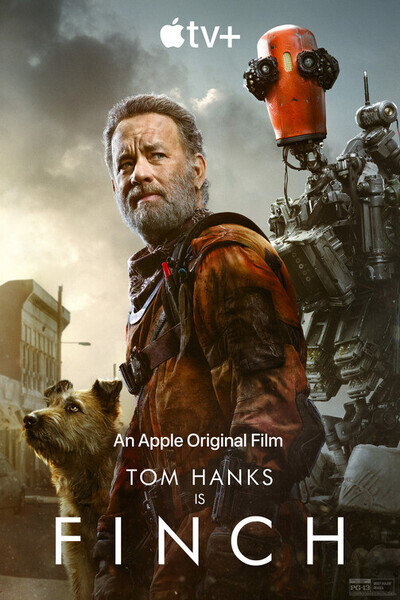