Quentin Tarantino’s 1994 "Pulp Fiction" gets a lot of grief for wellspringing, that is, for inspiring a container ship gross of (largely) inferior "edgy" genre pictures overstuffed with blood, guts, octane, and classic rock soundtracks. To spread around disapprobation where it’s due, I think the 1996 film version of Irvine Welch’s novel "Trainspotting," as good a film as that was, also brought into being a subgenre that got real tired real fast, a subgenre involving the gritty and repellent depiction of a world of sex and drugs, a depiction that also partakes of a certain giggly amorality (calling itself "anarchy," or something more high-minded), while playing that against an occasional po-faced assessment of the consequences of such a mode of life. Facile "pungent" irony and alternative rock soundtracks optional.

In 2014, there’s actually something mildly anachronistic about "Filth," writer-director Jon B. Laird’s adaptation of a 1998 novel by Welch. The movie’s opening credits play over a retro-lounge rendition of "Winter Wonderland." There’s a low-angle shot of what appears to be the world’s longest dressing room floor, black and white chessboard tile, and at the end of the line, a beautiful woman in lingerie with her back to the camera is putting on lipstick, looking at herself in the mirror. It’s all very 1995 imagining it’s 1957. When DOES this movie take place, anyway? The fact that its lead character, Bruce Robertson, is seen watching a television program (or "programme" as they say across the pond; the movie is set and was made in Scotland) featuring papier-mâché headed character Frank Sidebottom suggests late ‘80s-early ‘90s. The fact that he’s watching said programme while masturbating and making an obscene phone call to the unsuspecting wife of a "friend" says a bit about Bruce’s character, of course. He’s a cop, a bad one, and he’s gunning for promotion, and his obscene phone call stunt is one of the many machinations he’s using to achieve that aim. Or so he believes.

To be fair to "Filth," which boasts a creditable cast featuring James McAvoy (in the lead role), Jamie Bell, Eddie Marsan, Imogen Poots, Jim Broadbent, and others, the movie is not exactly what its initial flurry of sarcastic voiceover ("When did a single-figure IQ ever hold anyone back in the police force?"), cheeky irony, and unrelenting depiction of drinking and drugging make it seem. It’s actually something just a bit worse. Rather than a how-sweet-to-be-a-lout story that turns semi-cautionary, "Filth" attempts to depict genuine madness. More than merely an out-of-control sybarite prone to the corrupting influences of power, Robertson is supposed to be a Genuinely Broken Man. One who Used To Be Good. Or at least Had Potential. I understand such things do happen in life, but in "Filth," the movie, such things are laid out in ways that become almost reliably predictable and unenlightening. A side trip for the lead characters to Hamburg ends with the boys chased out of a sex club to the strains of "99 Luftballoons," can you believe it?

As the movie goes on, what had at first blush seemed a Macbeth-type scheme on Robertson’s part is revealed to be a complete non-starter, and the viewer is ostensibly plunged into the character’s tortured psyche. But there’s nothing really revealing therein, just more pastiche; a character who morphs into a version of Carroll’s White Rabbit, a dialogue exchange that turns into a musical number. McAvoy’s nudge-nudge performance has a similarly tired quality. "Filth" demonstrates that contemporary filmmakers would do well to find new ways of getting their hands dirty. On the plus side, a viewing of the movie might temporarily cure just about anyone’s nostalgia for the mud. 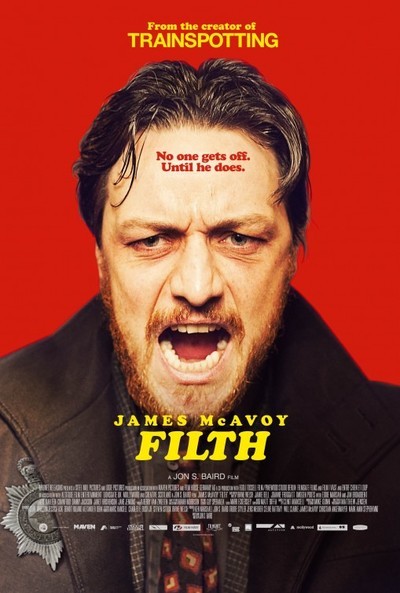