Fighting with My Family

Can you smeeelll what the Stephen Merchant is cooking? Yes, while “Fighting with My Family” boasts a guru-presence cameo by Dwayne Johnson, a whole lot of funny talent performing athletic slapstick, and even some laugh-out-loud shade at Vin Diesel, the key to WWE Studios’ best film yet is the co-creator behind shows like "Hello Ladies" and “The Office.” Merchant’s mind for sharp dialogue and character-based comedy proves to be an essential muscle for this feel-good true story, which tells of how WWE superstar Paige came from a completely lovable wrestling clan and rose to international stardom.

When Saraya Knight and her brother Zak are shown tussling as kids, their parents intervene—to correct the chokehold to make it more effective. Their home proves to be a charming atmosphere, where the parents, former-convict and current teddy bear Ricky (Nick Frost) and force of nature Julia (Lena Headey), love each other deeply. The family shares this positive atmosphere in their wrestling gym and indie wrestling league in their working-class English town, where they teach a band of excitable young kids how to pin, bounce off the ropes, etc. The two stars are the now-grown Knight children, Saraya (Florence Pugh), her jet-black hair and lip ring as definitive as her shyness and shortness, and the slightly hot-headed Zac (Jack Lowden). The Knight clan sees each other as equals, and when they do fight, it’s the good kind.

One of the film's funniest scenes is early on, when the Knights meet the parents of Kirsten (Aqueela Zoll), Zac’s girlfriend. With Kirsten’s dad played by the comparably demure Merchant, the Knight family are true bulls in a china shop of delicate upper-class niceties. To watch Merchant interact with them is especially funny, while highlighting how this family has their own language, and that they can’t help but be themselves. Most of all, they’re proud of where they’ve come from. It makes for a very warming ensemble comedy, the quartet’s chemistry making a vivid nest that Saraya soon leaves when she gets a shot at professional wrestling.

Saraya's steady ascent to WWE stardom with blood, sweat, tears, and personal branding (where she changes her stage name from Britani to Paige) then presents Merchant with a narrative challenge he doesn’t entirely pin down—how do you show a character’s progress arc in an industry where everything is fixed, not faked? He finds a solution in part by not forgetting about Zac when he doesn’t make the cut, and putting a lot of dramatic screen-time into Paige’s weaknesses—that she isn’t as strong as some of the other women, which her coach Hutch (played with tough love by Vince Vaughn) reminds her about. Worst of all, she gets stage fright when it comes to the essential act of talking trash in the ring. Pugh and Lowden’s full-bodied dramatic performances express the complete frustration and isolation within these shortcomings, representing hard-working people who are tempted to give up on a dream for many reasons. This eventually makes for moments in which the film, as unabashedly formulaic as it is, can be genuinely inspiring.

But in spite of the many montages that show what wrestling requires physically, this movie is honestly about successfully branding yourself to superstardom, which WWE seems to be in denial of in pursuit of a classic athletic success narrative. Even though there’s a sense of those who simply do and do not have what Vaughn calls “spark,” there’s little explanation of that, blurring the potential of being able to root for someone to have “it,” whatever that is. The movie goes so far as to make its pivotal match seem like a fight won purely by strength, even though The Rock himself shared during the Sundance Q&A that while Saraya's first big match (known at that point as Paige) did have the same winner, he did tell her the result the night before, which the script avoids. It’s artifice in awkward denial of itself, and it cheapens the hard work of people like Paige, as much as we see her and her peers throw every part of themselves into this entertainment.

Packaged in part as a look back on executive producer Dwayne Johnson’s own success, the film begins with old wrestling footage of him as The Rock, and then jokes at the end about how he created himself a career outside of wrestling. It calls to mind how Johnson became a superstar by branding himself as down-to-Earth on- and off-screen, making him one of the most inspirational superstars you can follow on Instagram. You get a comforting sense that the WWE is following his lead: even though “Fighting with My Family” is undoubtedly about branding the WWE as a fantasy factory, its biggest strengths are its wit and surprisingly big heart, celebrating underdogs who rumble for what they love.

This review was filed from the Sundance Film Festival. 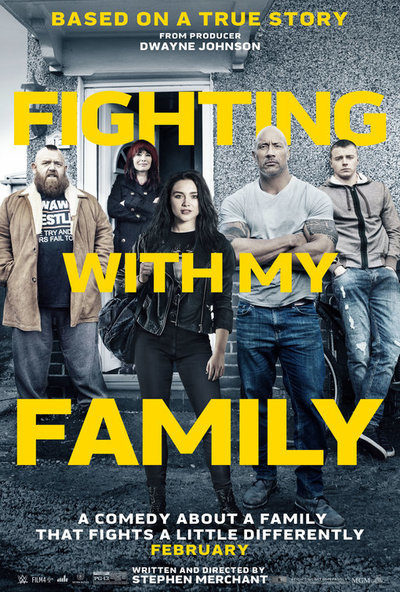 Rated PG-13 for crude and sexual material, language throughout, some violence and drug content.

Dwayne Johnson as The Rock