“There are three conflicts and you side with both sides,” critic Kenneth Turan says, explaining the heart of “Fiddler on the Roof,” and why it became one of the most beloved musicals of all time. There has already been one documentary about the improbable story of the Broadway musical based on the stories of a poor dairyman in a Russian Jewish shtetel, the 2019 film “Fiddler: A Miracle of Miracles.” The stories written by Yiddish author Sholem Aleichem had universal themes of parents, children, money, prejudice and the endless struggle between tradition and the need to adapt to changing times. And the music by Jerry Bock, lyrics by Sheldon Harnick, book by Joseph Stein, and dances by Jerome Robbins brought those stories, well, “To Life.”  The specific details in the story may not be universal, but it is the specifics that illuminate the universal details. Everyone in every culture knows what it is to leave home, to become your own person, to separate from your parents’ ways of doing things. And every parent knows the experience so heart-piercingly expressed in the song “Sunrise Sunset” about that moment of realizing that your children are grown and a new generation is on its own path.

The Broadway musical, produced all over the world, became an Oscar-nominated movie in 1971, and that story now has its own documentary, “Fiddler’s Journey to the Big Screen.” Director Norman Jewison and some of the filmmakers and performers share their memories and we get to see behind the scenes footage of the filming in what was then Yugoslavia and in Pinewood Studios in England.

If this documentary never makes it out of the category of “interesting DVD extra” into a standalone film, it still has some entertaining inside stories and some insights into the art of cinematic storytelling. The film also shows the continuing relevance of “Fiddler’s” themes more than half a century after its debut, and more than a century after Aleichem first wrote about Tevye and his daughters. As “Fiddler” director Norman Jewison says—recalling the location they found to replicate a tiny Jewish community in 1905 Russia, like the musical’s fictional town of Anatevka—the Yugoslavia they knew is gone.

The documentary is as much a love letter to the filmmakers as it is to the film. Like every documentary ever made about filmmaking, it shows above all how unlikely it is that any movie, especially a good movie, ever gets made at all. There are always unforeseen crises and setbacks and there are always so many personalities and so many moving parts and so many decisions that it's like trying to do a jigsaw puzzle in the dark while riding a unicycle backward.

So many pieces have to fit; sometimes quite literally. One of “Fiddler’s” most well-known songs is Tevye’s “If I Were a Rich Man.” Jewison was committed to turning the theater production into a realistic, gritty, natural-looking film, and so he decided that Tevye, played by Israeli actor Topol, who had starred in the role in London’s West End production, would sing the song in his barn and at one point climb the ladder to the loft as he sang. This required very close coordination with John Williams, who did the score, Robert F. Boyle, production designer, and Tom Abbott, the choreographer. One rung of the ladder or one measure of the song too many or too few, and Tevye would not make it to the top on the right beat. Not to mention the marble dust used for fake snow that worked perfectly for cinematographer Oswald Morris but was disastrously slippery for the dancers.

The story of Isaac Stern’s reaction to being invited to play the violin for the title character is endearing, as are the stories about the real fiddler on the real roof and Jewison’s thoughts on the fiddler as metaphor. Rosalind Harris, Michele Marsh, and Neva Small, who played Tevye’s three oldest daughters, are a delight to watch as they recall how thrilled they were to get the news they were going to be in the film and how much it still means to them to have been a part of it. A commenter in the documentary says that making “Fiddler” was a sort of “Brigadoon,” a magical one-time-only experience with no breakout stars, as though it was so real and so organic no one could imagine the performers doing anything else.

While the documentary does not quite live up to its promise to show us Jewison’s creative and spiritual journey in making the film (it is fun to hear him respond to the offer to direct with “What would you say if I told you I’m a goy?”), it does make clear what a completely charming and engaging person he is. (The same with John Williams—we need full-scale documentaries about both of them, immediately.) Jewison gives us one hint when he says that like another of his most beloved films, “Moonstruck,” “Fiddler” is about that most universal experience, family—the conflicts, the frustrations, and how at the end of the day, they all sit down around the same table. The best part of a documentary like "Fiddler's Journey to the Big Screen" is how it peeks into the thinking of those rare people who can piece together the impossible movie jigsaw puzzle, in order to show us our world, our community, our families, and ourselves. 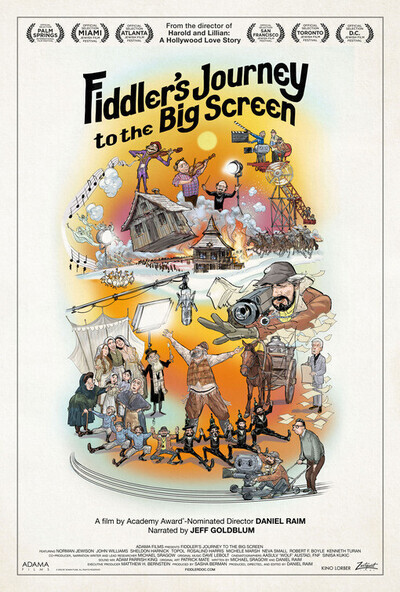 Jeff Goldblum as Narration by

Norman Jewison as self

John Williams as self

Chaim Topol as self

Rosalind Harris as self

Michele Marsh as self

Neva Small as self

Robert F. Boyle as self

Kenneth Turan as self

Sheldon Harnick as Self