The cold open of this movie is unpleasantly eye-filling. In individual shots we see a woman’s bloodied-up hands and bloodied-up feet tied to a bedspring; gagged, she screams as she strains. A male figure in a sleeveless t-shirt, his face invisible, stands nearby, holding a firearm. At the bound woman grows more violent, her pupil changes to that of something not human. The man in the t-shirt adopts his “badass with a gun” pose (what is it with movies, that every time someone’s gonna pull a trigger, he’s gotta assume some dumb “I’m gonna pull the trigger” position?) and fires, killing the bound woman.

The good news is that “Feral,” directed by Mark H. Young from a script he co-wrote with Adam Frazier, is not a horror movie about a guy in a sleeveless t-shirt who binds women to box springs and shoots them. Not per se, at any rate. No, “Feral” is about a group of college students (no!!!) who venture out into the woods (no!!!!) only to get lost and find themselves beset by creatures…help me, I can’t go on.

And yet I must. Three couples, one of them same-sex, make their way through a wood, and say things like “Are we lost?,” “Are we going in the right direction?” and “I haven’t been here since I was a kid.” They’re heading for a lake, apparently. Giving up, they set up camp, and as night falls, discuss their med school thangs. When Matt (George Finn) reveals he’s going to be a urologist, one of the other guys taunts “Matt’s gonna be a penis doctor. He loves the D.” Oh my. One of the same-sex couple, Alice (Scout Taylor-Compton) reveals her passion for epidemiology. And so. Once in their respective tents, the kids plod through some of the worst screenwriting-workshop character-establishment bits of dialogue I’ve heard in some time, for instance, “I’m from the Bible Belt, not the Big Apple.”

After proposing to his own squeeze, Matt leaves the tent to take a pee (ironic, when you think about it) and is promptly set upon by a creature sputtering what sound like free use library “Beast” sound effects. This thing disembowels poor Matt with haste. We only see it fleetingly, a savage-looking thing with a very bald pate. “Man, the singer from Classix Nouveaux is looking kinda rough,” I said to myself. Matt’s girl Brienne (Renee Olstead), despite having not heard his very, very loud screams, goes looking for him and gets swatted by the creature, badly.

When daylight comes, the traumatized kids find a cabin occupied by an older gent named Talbot. He’s willing to help the kids out, but within limits. Turns out there’s some kind of virus about, an agent that Talbot calls “the feral virus,” that kills you, then reanimates you as a hairless human-flesh eating grotesque. An undead zombie, or not.

And so the standoff goes: taciturn Talbot (whose secret explains the film’s prologue) acting for and against the victims, the potential victims at internecine odds with each other (the guy who mocked poor Matt for wanting to be a urologist gets his foot caught in a bear trap after lesbian-baiting one of the girls, serves him right) and feral creatures coming around to break up the monotony, only they don’t. And if you were wondering that the movie ever does answer the question, “Where’s an epidemiologist when you need one,” no it does not, even though it clearly gives itself every opportunity to do just that.

Director Young shoots his unimaginative opus with an eye of getting all the value of the gore makeup department’s work on screen. In this respect, he does a bang-up job. As for everything else, well, this movie does answer the question “What if Eli Roth’s ‘Cabin Fever’ had zero sense of humor?” very satisfactorily. 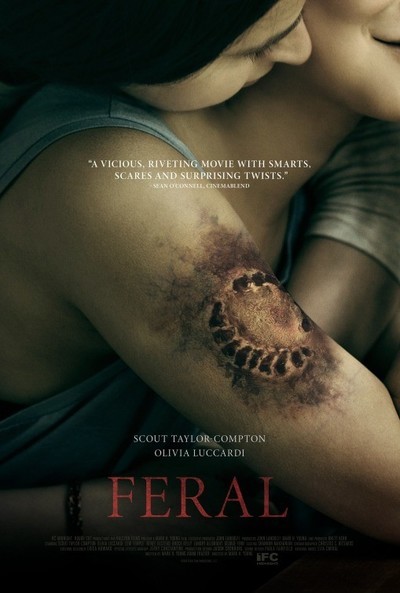