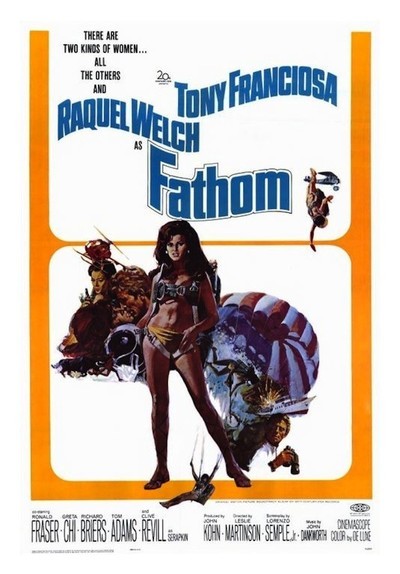 So anyway, if she had been Italian, her voice would have been dubbed for the American market. So we would have seen this beautiful broad with a great figure and really first-class cheekbones. And when she talked, we would have heard another voice, a voice belonging to some girl in a studio somewhere with a low, sexy tone and a certain amount of acting ability.

And we would have flipped, I guess, because anyone looking like that and able to read her dialog would have been -- well, nice.

But the trouble is, Raquel Welch is not Italian, She's American, which would still be OK, except that she uses her own voice in her movies, and she talks wrong for the way she looks. This is the big problem with her.

But when Raquel Welch speaks, she sounds like every drive-in waitress and every beauty queen and every female high school class president and every not-very-bright good sport you ever heard. She stands there in that bikini, with her hair flowing in the breeze, and her face looking haughty and beautiful, and then she opens her mouth and says, "Gollee, you fellows have got yourself the wrong gal. I didn't kill him, honest. I mean, really."

And the whole thing falls apart. Raquel plays a dental technician from California, who comes to Europe for skydiving championships and is recruited into a spy ring to get back an H-bomb trigger. And she's in lots of intrigue and danger, with Chinese spies and all, and the whole thing depends on maintaining the fantasy. It isn't fun unless you can believe, at least a little bit, that this beautiful girl is really involved in this business.

And you can't. The whole plot depends on her being at least a little credible, and she isn't. In the end, she isn't even very sexy. Her voice holds no promise or mystery, and her movements aren't alluring. She isn't at ease before the camera. She moves stiffly, she stands awkwardly, and when she talks it doesn't matter what she's saying, it comes out the same.

What a shame. Maybe Raquel Welch is the archetypal American sex symbol of our time, and she's what we deserve. Jane Russell was dumb and sultry, and Marilyn Monroe was fresh and funny, and Carroll Baker was nervous and anemic, and finally we get Raquel Welch, who is perfect. An Amazon. But don't touch, she might break.