Father Of The Bride Part II

“Father of the Bride Part II” belongs to the genre that could perhaps be called Surrogate Happiness Movies. Good things happen to the characters, we identify with them, and so in a sense they happen to us. Such movies usually contain a minimum of one childbirth scene.

Of course, there are many exceptions to that rule. But movies like this butter us up so well that we'd feel like a grouch criticizing them. "Father of the Bride Part II" is not a great movie and not even as good as its 1991 inspiration (not to mention the Spencer Tracy-Elizabeth Taylor original from 1950). But it is warm and fuzzy, and has some good laughs and a lot of sweetness.

All of the key players return from the earlier film. Steve Martin and Diane Keaton play George and Nina Banks, a comfortable married couple whose daughter (Kimberly Williams) got married in the previous film and is now about to make them grandparents. Kieran Culkin, of the Culkin child dynasty, is back as Matty, their younger son. Martin Short and B. D. Wong return as wedding coordinators who now turn out to be interior decorators as well. And many of the supporting characters are the same, as is the expansive old house in which George and Nina reared their children.

As the film opens, they're beginning to feel like empty nesters.

Matty will be in college one of these days, and maybe the old house is just too big. Plus, there are maintenance problems. (They stand in the kitchen while water drips from the ceiling during a rainstorm, and I guess we're supposed to forget they live in a three-story house and that would be one hell of a leak.) Anyway, what with one thingand another, maybe they should move to a smaller place by the beach.

George puts the house on the market, sells it immediately, agrees to be out in 10 days, and sets in motion a series of family crises that I may very well reveal in the paragraphs to come, so read no further (unless you already know the whole story from seeing the previews).

Nina, of course, finds herself unexpectedly in the family way, and so mother and daughter are both pregnant. No prizes for guessing that they may find themselves delivering at exactly the same moment.

George is aghast at this news. ("Going to the movies - that will be economized: `One child - two seniors.' ") George tries to buy back the family mansion, there are misunderstandings with the in-laws, and a slapstick sequence seems a little out of place: George takes too many sleeping pills and is subjected to an unwanted prostate procedure (not that there is such a thing as a wanted prostate procedure).

The big parallel childbirth scene is familiar from many other movies (it was done to perfection by Dudley Moore in Blake Edwards' "Mickey & Maude"), but it gains a certain weight and credibility by the performance of Jane Adams as Dr. Eisenberg, the obstetrician. She enters the movie unheralded, projects an unshakable calm and sensible humanity, and turns her supporting character into an oasis of sanity.

One can imagine the role being played as all clichés, so it's refreshing to see it reinvented by good acting.

Steve Martin supplies the center of the film, as its narrator and comic relief. Once again we are reminded that he has a sweet, gentle side to go along with the cynicism of some of his earlier films. The movie was directed and written by Charles Shyer and Nancy Meyers, the husband and wife whose earlier family comedies include "Irreconcilable Differences" and "Baby Boom," as well as "Father of the Bride." I had the unmistakable feeling, toward the end of this film, that they may be reaching the end of this particular road and that there may be new horizons to investigate and new Surrogate Happinesses to explore. 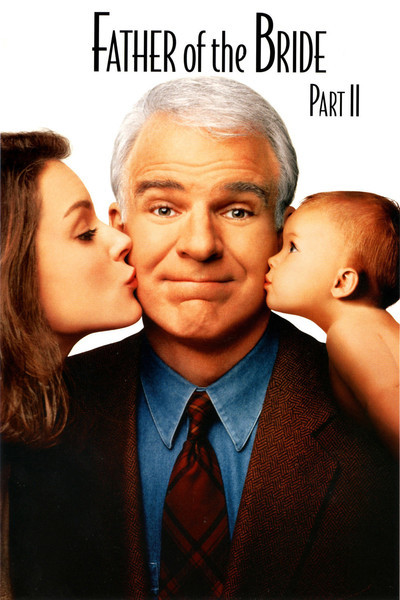 Rated PG For Some Mild Language and Thematic Elements