A wise man once told me that funerals bring out the best in people but weddings bring out the worst. There are inevitable conflicts about whose traditions should be honored, awkward encounters with people we’ve never met before who are suddenly part of our family, and a marathon of wedding-adjacent events and obligations. Weddings may make for some stressful moments, but they are all but certain to make for a relatable and entertaining movie.

In its third feature film, not to mention the many variations it has inspired, Edward Streeter’s wry novel about the social pandemonium, staggering cost, guest list debates, and bittersweet emotions accompanying his daughter’s wedding remains a durable foundation for a mix of broad comedy, generational conflict, and the mixed feelings of pride and loss. There’s a reason the title makes clear it is the father who is the focus. It is through his eyes we see the wedding as an occasion to re-think his own place in the world, his daughter making her own choices, choosing someone else to be the most important man in her life.

This version benefits from being centered on two Latino cultures. The Spencer Tracy and Steve Martin “Father of the Bride” films were about WASP-y families. This one is about Cuban-Americans living in Florida and it makes the most of the vibrant colors and music that are central to their community. Andy Garcia and Gloria Estefan play Billy and Ingrid Herrera, with Adria Arjona as their lawyer daughter Sofia, and Isabela Merced as her would-be dress designer sister Cora. Sofia’s fiancé Adan (Diego Boneta) is Mexican and they plan to leave their New York law firm jobs to work at a non-profit in Mexico. So, there are many generational and cultural conflicts. Instead of a church wedding, they want the officiant to be “my guide Monica from the Zen center.” Will the music be salsa or mariachi at the wedding? And wait until you see Billy’s face when Adan’s father mentions that he’s bringing Mexican cigars to the reception.

There are conflicts within the Herrera family as well. Billy arrived in the United States with nothing and worked hard to become an architect. It means everything to him that he was able to provide a home for his family, one he built himself. He is proud of what he has accomplished and proud of his Cuban heritage. But Ingrid feels that he takes her for granted. Counseling has not helped and she wants a divorce. The therapist tries to be reassuring about what comes next: “Just because this marriage has devolved into rancor and reprisal does not man the divorce has to as well.” The night they are about to tell the family, Sofia announces that she has met someone, she is engaged, and she wants to have the wedding in a month so they can move to Mexico and start new jobs. Billy and Ingrid agree to delay the news about their divorce until after Sofia is married.

That secret replaces some of the plot elements of the earlier versions, putting more emphasis on the conflicts between Billy and Ingrid. It skips the cringe comedy of Steve Martin’s falling into the in-law’s pool or the gentle fantasy of Spencer Tracy’s anxiety dream. And it omits one of my favorite moments in any movie ever, Spencer Tracy’s face when Elizabeth Taylor tells him why she wants to call off the wedding. His seamless shift from concern to relief to understanding to deep paternal love mingled with the wistful realization of all the lessons in love the young couple has ahead of them is a master class in acting. (Steve Martin’s version of the scene is almost as good.)

This version does include the perennial wedding struggles we saw in the earlier films. There’s some relatable humor to be mined from the upselling and wedding planners (Martin Short was a highlight of the Steve Martin version as Franck). Chloe Fineman of "Saturday Night Live" is Natalie, the "Gen Z wedding financial advisor, family therapist, and stylist,” or someone’s idea of a Gen-Z person as one who sees the world in terms of how it will look on Instagram. When Billy asks Natalie for a business card, she says, “Okay, Boomer,” and her slide show of proposed decorations features flamingos. Fineman gets as much humor as she can out of a character who is a combination of pretentiousness and cluelessness. And then there are the new in-laws, who have their own cultural imperatives and inter-family conflicts, but somehow make Billy feel competitive and as though he’s losing control.

Some awkward transitions suggest possible re-cuts to keep Billy and Ingrid at the center of the story and there is too much Natalie and not enough Cora. But Garcia and Estefan and all of our feelings about weddings bring so much warmth and good humor to the movie that it calls for a "yes" on the RSVP. 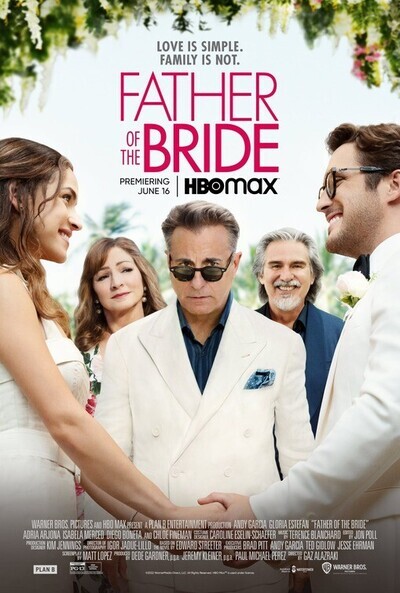