The key question is whether or not we can sympathize with the main character of "Family Life." The filmmakers certainly believe we should, since the movie primarily assumes his perspective, save for the introduction and the coda. That's the trick. Directors Alicia Scherson and Cristián Jiménez, as well as screenwriter Alejandro Zambra, assume a point of view akin to the protagonist's headspace—what he's thinking, why he thinks it, how what he thinks and why he thinks that way translate into action.

For a while, Martín (Jorge Becker) is mostly a man of inaction. He doesn't do much of anything, and that's the way he would prefer it. He has been offered a brief job of housesitting for his second cousin, the son of his late father's cousin, while the cousin is away in Paris with his family for a few months. The relatives have only met a couple of times in adulthood—once while out for drinks with Martín's now ex-girlfriend and at his father's funeral.

Martín hasn't recovered from either the breakup or the death of his father yet. It makes his cousin Bruno (Cristián Carvajal) think that Martín is "weird." Bruno's wife Consuelo (Blanca Lewin) finds him intriguing, because he seems to walk around as if there's a dark cloud hanging over him.

The movie's introductory section follows the life of Bruno and Consuelo for reasons that become a bit clearer during the epilogue. What is clear from the start, though, is how capable Jiménez, Scherson and Zambra are at illuminating the day-to-day worries that point at the deeper concerns of their characters. The movie opens with Bruno and Consuelo in the midst of secretive sex in the living room of their upscale, two-story home. Their daughter Sofi (Adara Casassus) is asleep upstairs, and in the low-key afterglow, Consuelo worries that their daughter might have heard them.

There's something amiss with the couple. It took some convincing for Bruno to agree to the trip to Paris. Sofi acts happy about the "vacation," as she sees it, but the girl leaves an angry note on her bedroom wall saying that she hates her mother, her "ugly father," and Paris. When Martín arrives to go over the details of housesitting duties, Bruno points out that there are a few attractive neighbors that the cousin could seduce. He later tells Martín that it was a joke, but that's only after Martín asks if his cousin has slept with any of them.

No one in the family openly discusses any of this, although, after a few drinks, Martín is open about how he was in love with his ex, how he hasn't really gotten over her, and how he's depressed about his father's death. This honesty is "weird" to Bruno, but Consuelo sees it with a bit of romanticism.

For their part, Jiménez and Scherson find something of a middle ground between those two perceptions of the character. Much of the first section of Martín's stay at the house involves him lounging around (naked for a portion), inspecting the owners' possessions (in the case of Bruno's clothes, trying them on), and scanning photographs of his extended family in a photo album—zooming in on his face as a boy until the eyes are a blur. He is not a happy man, although we later garner the extent of how unhappy he might be in the way he edits those pictures.

A story emerges when the family cat goes missing and Martín meets Pachi (Gabriela Arancibia) over some confusion with flyers in town (her dog went missing, too). A sensual but pragmatic love affair begins between the two. Pachi, a single mother to a son (played by Lucas Miranda), doesn't want anything serious at first. Martín is happy to oblige, too, at first.

He is, after all, pretending to be someone else in this relationship, and that's where the sympathy levels for the character begin to diminish. There's some truth in his deception: He says he isn't quite over an ex, although the ex-girlfriend has become an ex-wife, and it's Consuelo's picture that he uses to represent her (he tries to kiss Consuelo as she's leaving for the airport). As one would expect, the relationship becomes more than just sex. Martín begins spending time with Pachi's son. There's plan for him to meet her family. A lovely shot has the trio—Martín, Pachi and her son—sitting in domestic tranquility with a returned pet. On his face, Martín has an expression that could, finally, be called content.

It's based on a lie, obviously, and the movie gradually shows how deep that lie is for Martín. For all of the work that the filmmakers do to help us understand Martín's motives for the deception (not to mention Becker, whose performance is quite good), there's an important piece missing, though: Pachi's perspective.

Part of the trick in seeing this story from Martín's point of view is that she becomes something of a generically "strong" woman, who has handled such behavior before and surely can handle it again. It's not until the final two shots of "Family Life," in which two women share a silent moment of confounded acknowledgment, that the filmmakers recognize that Martín's behavior, as understandable as it may be from his perspective, has a price for others. 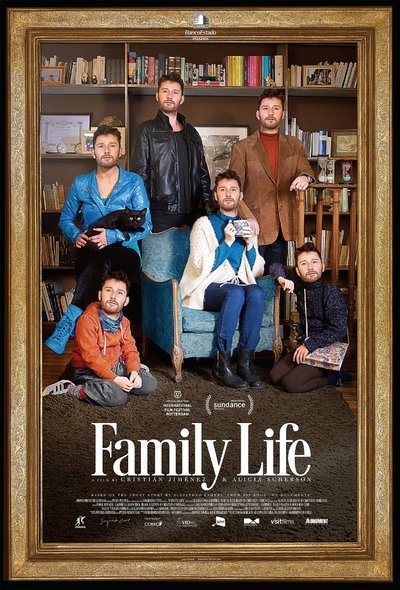