There are other complications. Sigourney Weaver is engaged to an Israeli agent (Christopher Plummer) who is involved in secret international negotiations to smuggle Jews out of the Soviet Union. His plan involves clandestine payments to a Vietnamese agent who got rich on the black market in Saigon and has now moved to Manhattan. The other characters include James Woods, as Hurt's eccentric and unpredictable fellow janitor, and Steven Hill and Morgan Freeman as a couple of cops who wearily track down leads in the case (their best line: "When Aldo was a little boy, he must have wanted to grow up to be a suspect").

The development and solution of the murder mystery are handled with professional dispatch by Yates and his writer, Steve Tesich (who also wrote "Breaking Away"). A final shoot-out in a midtown riding stable has a touch of Hitchcock to it; the old master always loved to mix violence with absolutely inappropriate settings. But what makes this movie so entertaining is the way Yates and Tesich and their characters play against our expectations.

Examples. Weaver is not only a TV newswoman, but also a part-time serious pianist and the unhappy daughter of her domineering parents. Hurt is not only a janitor but also a sensitive soul who can talk his way into Weaver's heart. Woods is not only a creepy janitor but also the enthusiastic promoter of a marriage between his sister and Hurt. Hurt and the sister (Pamela Reed) carry on the courtship because they are both too embarrassed to tell the other one they're not in love. Plummer is the most complicated character of all, and it's a very good question whether he's a villain. It all depends on how you view his own personal morality.

I've seen so many thrillers that, frankly, I don't always care how they turn out — unless they're really well-crafted. What I like about "Eyewitness" is that, althought it does care how it turns out, it cares even more about the texture of the scenes leading to the denouement. There's not a scene in this movie that exists only to provide us with plot information. Every scene develops characters. And they're developed in such offbeat fidelity to the way people do behave that we get all the more involved in the mystery, just because, for once, we halfway believe it could really be happening. 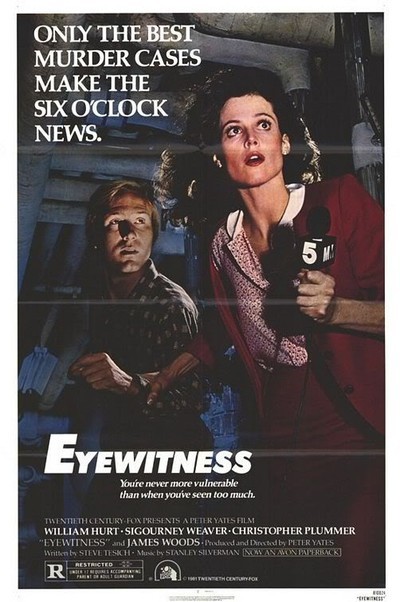