Sunita Mani stars in "Evil Eye" as Pallavi, a 29-year-old woman in New Orleans who is constantly hearing from her mother in Delhi (Sarita Choudhury's Usha) about how she should be married. All of this pressure, with many failed set-up dates in between, has turned Pallavi into a romantic comedy-ready cynic. That is, until she randomly meets the captivating Sandeep (Omar Maskati).

Usha's excitement about Pallavi's rich and handsome boyfriend turns to concern once she hears about everything he's doing in the relationship. In a short period of time, he proves to be an assortment of red flags, given the way that he tries to control her by buying her a nice apartment, and persuading her to quit her job. Usha knows from her own history that a guy like Sandeep is indeed too good to be true, and that Pallavi is walking into a trap.

The title for this "Welcome to the Blumhouse" installment is related to a curse that Usha has been trying to prevent her daughter from since birth. In the past, Usha had a horrific and abusive boyfriend, who nearly killed Usha before he died himself—a trauma of which Pallavi is unaware, but that we see in flashy fragments from Usha's memory when she is triggered. Usha thinks that her abusive ex is manifested in Sandeep, and in the anxious thrills of this story from writer Madhuri Shekar, she can't get her husband Krishnan (Bernard White) or Pallavi to believe her.

Especially as Sandeep starts to reveal more of his cold, controlling side, "Evil Eye" is a type of serious riff on salacious stalker movies, but instead of a marriage being threatened by an outsider, it’s the boyfriend who threatens to get in between a mother and daughter. Given this familiarity, you wish "Evil Eye" did a little bit more with its concept or that it was tighter in making its point. Maskati’s performance reckons, however indirectly, with the kitschy abusers we get from those movies—we’re accustomed to stalkers being over-the-top, with cheesy grins that bring some levity to real-life disturbing behavior. But the movie overall plays Sandeep’s sinister nature straight, a noble pursuit that also makes his character one-dimensional, and the story narrow.

And yet “Evil Eye” is mostly strong where it counts, beginning with the stakes of Pallavi and Usha's relationship. As the story presents their progressively tense phone conversations (despite being on the other half of the world), it establishes a palpable divide—Pallavi has become less of a cynic about relationships, and is unaware of how much she is losing her independence. Meanwhile, her mother, previously so adamant about her daughter getting married, starts to sound like she’s changed her opinion on the whole concept, and sounds more controlling than ever. Directors Elan Dassani and Rajeev Dassani accentuate this emotional disconnect in the movie's many effective phone call scenes, especially when the two strong performances occupy opposing parts of alternating frames. It's a testament to everyone's emotional work that Choudhury and Mani feel like their characters are clashing with each other as if they were in the same room.

It's also mighty effective in how it depicts the abuse and violence that haunts Usha, and is a lingering threat for Pallavi. Even if it uses some recognizable thriller shorthand—like a score that sounds like it was pre-made for an in-your-face trailer—“Evil Eye” can be equally grounded and claustrophobic. Toxic behavior is eternal, and "Evil Eye" sincerely depicts both those who do not recognize it, and those who are all too familiar with it. 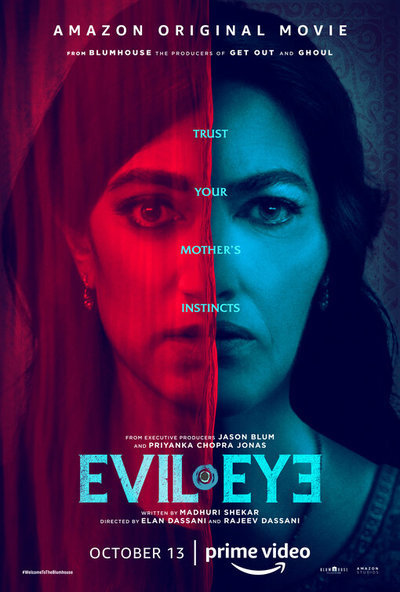