As a movie, "Escape from Tomorrow" is a dark, weird, smutty, fitfully amusing comedy that ultimately wears out its welcome. As a provocation, it's aces, especially if—like the film's writer-director, Randy Moore—you hate Disney and everything it stands for.

To be clear, I don't hate Disney. In fact I love a good number of the company's films, am fascinated by the history of its theme parks, and own books about the company's founder, Walt Disney. But I'm also a father of two who's visited Disney World on days when I was in a foul mood but had to suck it up and pretend to have a great time. That beleaguered side of me reacted to "Escape from Tomorrow" with cathartic glee. This low-budget black-and-white comedy about a husband and father going mad at Disney World is clearly the work of a filmmaker wrestling with demons. It was shot on location in Disney World without permits. Judging from what's onscreen, that was the only way it could have been done: if Disney had known what the cast and crew were up to, they'd never have allowed them anywhere near the parks. "Escape from Tomorrow" is an act of cultural vandalism, the feature film equivalent of drawing genitals on cute storybook animals.

Roy Abramsohn stars as Jim, the beleaguered husband of Emily (Elena Schuber) and father to two small children, Sara (Katelynn Rodriguez) and Eliot (Jack Dalton). He already seems distracted or dissatisfied when we meet him, but the sudden news that he's been fired from his job pushes him over the brink. Something inside of him snaps. He behaves with impatience and then bitter anger toward his wife and kids, develops a pathetic sexual obsession with two beautiful teenage girls (Annet Mahendru and Danielle Safady), and hallucinates sinister visions on harmless rides. The latter include a visit to Disney's "It's a Small World After All" that transforms the chirpy, one-world puppet show into a psychedelic nightmare. As Jim, Abramsohn has a bit of the beaten-down schlub quality that Matthew Broderick brought to the hero in "Election." He doesn't sugarcoat the character's unlikable qualities; he puts the desperation front-and-center, and makes sure that Roy owns all of his thoughts, including the sleazy and revolting ones.

Moore's themes and vision are too narrow to support a feature-length comedy. It's fine that we never leave Jim's perspective, and that the whole story is shaped, at times deformed, by his mix of despair, lust and resentment; many great movies have stayed anchored to one character's point-of-view. The problem is that Jim's psyche isn't fascinating enough to wallow in for 90 minutes, and the supporting characters offer no relief from the monotony of his distress; they aren't written to suggest that there's more to them than what Jim sees—and that's too bad, because whenever there's a gap between a lead character's perception of reality and reality, it enriches the story. The movie's teenage girls never seem like more than dirty-old-man fantasies, Lolitas skipping and laughing and teasing him. Emily is rarely more than a suffering spouse or a griping shrew (except in a marvelous late scene where she senses the depth of his misery and reaches out to him). We sometimes feel that Jim is not just projecting his pain onto undeserving proxies—that maybe these rhymes-with-witches are his real problem.

The movie's wild and disturbing climax redeems some of the movie's missteps. It unleashes the moviemaker's id by way of Jim's flipped-out imagination, and suggests he's right to think that the Mouse has a sinister agenda. There's a sense of missed opportunity at the end: "Escape from Tomorrow" could have been a sneaky masterpiece, and it isn't. But it's still a vital and significant American feature; all movies should be this "disappointing."  With its sneaky production history and low-tech special effects (including green-screened backgrounds a couple steps up from a karaoke video), "Escape from Tomorrow" is guerrilla art. It lashes out against the placid, sexless, clean-scrubbed version of happiness peddled by Disney, not because it thinks sanitized diversions have no place in American life, but because the Disney vision is as blandly oppressive as Nurse Ratched in "One Flew Over the Cuckoo's Nest."

"Escape from Tomorrow" screened at Sundance and EbertFest earlier this year. It got good critical notices and a lot of sight-unseen support, mostly from filmmakers who resented the way that media corporations squash art that tries to comment on their world view, their characters or their corporate history. Some assumed the movie would never get a proper theatrical release.

That Moore's film did, in fact, see the light of day suggests a sea change in media corporations' sense of what the phrase "Fair Use" means, and what level of bullying they can get away with. Maybe Disney's lawyers realized it's not appropriate to try to silence a comedy because it dares to treat Disney World and its copyrighted rides and characters as one might treat any other iconic site that families visit, such as the Washington mall or Times Square. To insist otherwise might have invited a legal battle—one that Disney would have lost, once the jury realized that "Escape from Tomorrow" was a political as well as an artistic statement, and that the decision to shoot on location was essential to its mood and message.

This is a small film set in small world, but its audacity makes it important. It feels like the first salvo in an intellectual property war. The enemy was wise not to shoot back. 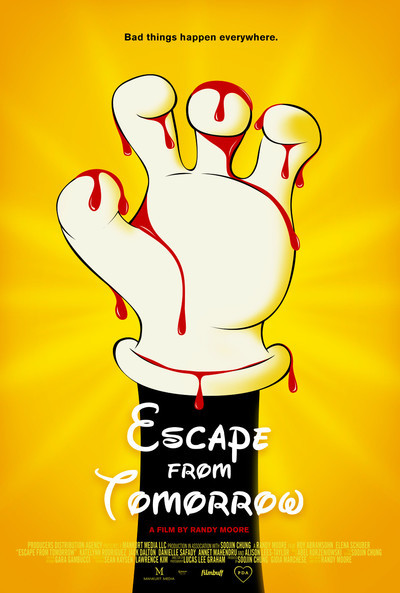 Alison Lees-Taylor as Other Woman